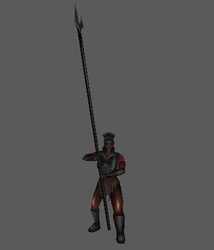 Time for some isengard can-openers!

Last but not least in the uruk series, the pikeman. There was some discussion when i released my sindar models about how long the pike could be without causing troubles with attack ranges in warcraft. With this model i made a kind of compromise, his pike is pretty long, but in the attack animation, he holds it on the middle (which is not really the proper way to hold a pike). In any case, it looks good and the uruk has nothing to overcompensate for.

Still, this is the model i am least pleased with, primarily because of how the animations look too bouncy when translated through that long weapon. I also did not bother to make a unique death animation for this one, and the "Stand Victory" animation will need some editing (no way he can wave that pike like that), but these are things i might come back to.

But for now, enjoy!


EDIT: Oh, and i forgot to mention, ofcourse all three uruk models use the same textures. Sweet, huh?

EDIT: Made all uruks wider of jaw and shoulders to make them look more manly. Not shown in the screenshot. Also fixed some triangulation to prevent his ass to clip through his loincloth.

Moderator
[img] [img] Misha [img] 28th Aug 2013 Moderator's Review: can you make the shoulders of all three lill beefier? and also redo the rigging that 'snaps them in half' in the 'stand victory' anim groovy :)
Read full review...
Reputation Statistics
Page 1 of 2
Show Ignored Content
Page 1 of 2