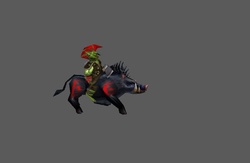 This is the 2nd version of my Troll Boar Rider series. The first version was a melee unit, this one is ranged, throwing a huge axe. There's also a custom projectile for this model. This boar is mounted by a precisely aiming Troll axe thrower, who rarely misses, and to make things worse, he can as well toss a net to esnare unfortunate fleeing enemies or airbornes. The melee version and this guy usually raid hand-in-hand, though the melee ones are usually making the larger number in a war party. The ranged guys are mainly a support unit, not the majority of the party. This cavalry unit is also rather light armored, with only a thick leather coat covering the rider, but the boar is the same resistant as the other version.
It's a pretty fast moving, light armored cavalry unit, that is best used for pillaging villages, raiding unguarded bases and for destroying enemy concentrations in forests, where huge formations are next to impossible. Boars are also considerably heavier-built than wolves, which makes them more resistant. In contrary to the other boar riders, these guys are more susceptible to attacks from ranged units. This might sound surprising or strange, but usual pikemen can be hold with a net at their place and attacked from safe distance, while this doesn't prevent most archers from defending themselves. But as with the other ''hoggers'', only a handfull of ground units can take them down and these guys are even a menace for air units.


Feel free to use it in any way you want! Have fun with it!

Moderator
08:16, 13th Apr 2013 Misha: um.. with this one i am a lill bugged with how the second pair of boar's tusks(in front) has it's tips rigged to somewhere else and stretches, and also how the front legs of the boar clip with the troll's legs.. and maybe...
Read full review...
Reputation Statistics
Page 1 of 2
Show Ignored Content
Page 1 of 2