Table of Contents
1. Introduction
2. Triggers – what’s up with that?
3. The Structure of a Trigger
4. Contexts
5. Resources
6. Local and global variables
7. Parallelism and scheduling
8. Races & Locks
9. Conclusions
Frequently Asked Questions

1. Introduction
Blizzard’s game mechanics are extremely powerful, and it is commonly known that they improve their environment with every additional game they develop. From Warcraft II to Starcraft II, the featured map editors have greatly improved, increased in flexibility and adapted to fit to modders’ various needs. Experienced programmers might find the environment obnoxious and crude, but be it as it is, many people use the provided engine to create extraordinary maps and mods.

While most of the concepts explained here might be familiar to the old Warcraft III modders, I hope I might bring something new to the veterans, while sheading some light into a newcomer’s mind about how the scripting language (supported by the Graphical User Interface) can be put to good work into giving life to great ideas and projects. This is a beginner tutorial, so it’s fine if you don’t know much about Blizzard modding.

Note
This tutorial is relatively theoretical, so at the end of it you should end up understanding generic, fundamental concepts, but crucially important for developing your modding projects. The regular programmer might find some of my explanations quite silly, maybe even ridiculous, but keep in mind that it’s the essence of the concepts we are interested in, rather than the academic shell.


2. Triggers – what’s up with that?
Starcraft II is a multi-threaded environment. In simple words, actors (be them units, buildings, players themselves etc.) perform actions at the same time and relatively independent of one another.

Example
Consider two marines fighting each other on the battle-field, while SCVs collect minerals at the base, the barracks are busy building more units and the players independently scan the map and issue various orders. This is all very complex and it is clear that all these actors act independent of one another – the SCVs collecting the minerals have nothing to do with the marines shooting bullets at one another.
Again, we are talking about the basic actions of the actors rather than complex scenarios, such as an opponent marine attacking the SCVs, causing the latter to run away. Even in this case the SCVs run independently of the marine’s actions (though the player’s decision to set the SCVs on the run or the marine to attack them has reason behind it of course, but this is a different type of ‘action’ and is not the direct subject of interest for our study).

Nevertheless, the question remains how to tame such a wild environment? What can the modder do to ensure that everyone plays by the rules of your games, while constructing everything in a structured and clean manner? The answer is very simple: using triggers.

Triggers are fundamental objects in the programming environment with a dual purpose. It enables:

3. The Structure of a Trigger
Warcraft III JASS programmers might remember that all triggers had to follow the Event – Conditions – Actions schema, the trigger object actually being implemented like this in the background. This does not remain true in Starcraft II, and we will see that Blizzard actually differentiates between the GUI (conceptual) and Scripting (effective) structure of a trigger.

Keep in mind, though, that this difference is purely conceptual. The two perspectives are merely point-of-view related and are in the end analogous (though these abstract concepts will certainly detail some aspects regarding triggers and their functionality). 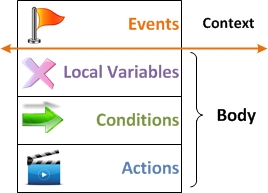 a) Conceptual Structure (GUI)
Conceptually speaking, the structure of a trigger is rather basic: Events – Conditions – Actions (with Local Variables to be discussed a bit later). The scenario is as follows:
(1) An event of interest for the Trigger occurs. By event of interest we understand the event registered for the specified Trigger.
(2) The Trigger checks whether the conditions are fulfilled. While the event is something intrinsically generic, conditions are circumstantial.
(3) The actions are executed in order, one by one! This is the actual code the environment is expected to execute! 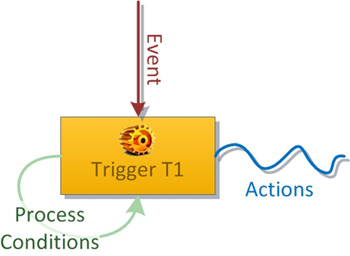 b) Effective Structure (Script)
While the conceptual structure is really simple to understand, the underlying structure of a trigger is even simpler. Essentially, two steps are taken into consideration: creation & reaction of the thread.

Maps 2 Spells 2
As far as I am aware, SC2's virtual machine is single threaded. Although many scripting threads can be generated to run at the same time, the virtual machine will execute them 1 at a time from start to finish until all schedualed threads complete within a frame. Use of thread suspension functions (wait) will reschedual the thread to continue at a later time and the machine will then proceede to another thread.

As such, every block of code can be considered atomic and so multi-threading functions such are semiphores, mutexes and critical sections are not needed. This also means that race conditions and deadlocks are not possible.

Ofcourse, I have no evidence to support this next to word of moth from other people who appeared to have experience using the language.

I guess the easiest test for parallelisim is to get 2 threads tun print different messages out in a big slow loop. If the messages start to interleave at any time (switch) then it employs multi-tasking. If messages appear sequentially (all first sort followed by all second sort) then it does not employ multi-tasking and so all blocks of code can be considered atomic.

Models 22 Icons 5 Tutorials 16
This was indeed a very nice experiment. I should have conducted it earlier myself, though for some odd reason I considered it unnecessary. I will need to update certain parts of the tutorial that rather clash with my initial belief regarding the system.

Let's start with the conclusions I've drawn after running a few experiments. It seems the VM implements a modified Round-Robin scheduler. It mainly consists of a queue in which threads are placed upon trigger's response to events (creation mechanism detailed in chapter 3). The time quanta allocated to a thread is a fixed value t0, but it is rather large (I think of the order of seconds?).
Thing is, the system does not preempt the thread after it has consumed its entire time quanta (like the classical RR scheduler does), but instead kills it. The only way threads can relinquish access to the "processor" is (just like you mentioned) via a Wait call. Only this way are threads popped from the head of the queue and pushed at its tail. Of course if the thread finishes executing all the instructions it is removed from the scheduler too.

And now to answer your comment (my sincerest apologizes if the responses sound a bit harsh, it's 3 AM here).

As far as I am aware, SC2's virtual machine is single threaded.
Click to expand...

Threads exist! The lack of active preemption does not remove the thread concept. If threads did not exist it would be impossible to schedule the execution of actions as a response to events. It's the implemented scheduler that acts a bit different from what one might expect; it rather resembles a "First Come First Served" policy, which is highly impractical in nowadays' Operating Systems. In FCFS schedulers, the time quanta is set to infinity - threads cannot be preempted, but instead they need to relinquish processor control themselves.

As such, every block of code can be considered atomic and so multi-threading functions such are semiphores, mutexes and critical sections are not needed. This also means that race conditions and deadlocks are not possible.
Click to expand...

Because of the scheduler's non-preemptive behavior, you are right indeed that synchronization mechanisms no longer require native support (I understand now why the Blizzard locks - or Critical Sections as they name them - can be implemented via busy-waiting). Uninterrupted blocks of code (wait-free) can be seen as atomic (there is no way to forcefully interrupt a thread without completely killing it). If even the tiniest Waits, however, are placed anywhere in the actions, they generate - roughly speaking - a "context switch".

And as a very simple example we might consider the first question in the FAQ. When a trigger generates multiple threads (as the event occurs multiple times), one can ensure the execution of one thread at a time only by placing it into a critical section (disabling the trigger has no effect once the thread has already been generated, and I will have to correct this too in the tutorial). Of course one might argue why would someone need such a special trigger that also contains waits inside it. While I admit this might be a bit of an "extreme" case, we all know that with a bit of ingenuity and lots of experimenting, modders can put all these mechanisms to good use. So yes, I do believe the Critical Sections can be put to good use, though they are not as important as specified in the tutorial.

I will update the specific sections accordingly and let you know when I have performed the proper modifications.

Tutorials 2
Looks good with screenshots and nice job again doing something with your very start in sc2.

Very good tutorial!
I thought I'd never find what I was looking for =).

Alas, after reading all the posts, I'm a bit confused. For example, if someone was to do a StarCraft 2 trigger like system, what would he need to implement? And is crritical section really useful?

Download what? That is a diagram showing the thread queue for timer based blocked threads.
You must log in or register to reply here.

How to create a dialog Health Bar