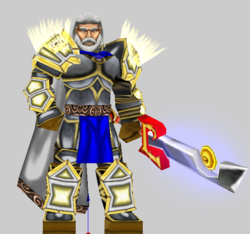 I wasn't satisfied with my uploaded Tirion model so I made new one. This time with the animations from Direfury. The model is made to fit with the original Blizzard models and it doesn't have huge polycount.
Enjoy and give credits to me and Direfury, this model won't be finished without his animations.

Update: Changed the head entirely. The cape should now have twosided TC.
Previews

PROXY
Review: Model looks great and the given animations look also good enough. A few things though, which should really improve the whole appearance of the model once changed. 1. The head. The beard and the hair just look wrong. Use the head of the wow...
Read full review...
Reputation Statistics
Show Ignored Content