The Wildhammer Dwarves of the Hinterlands and Twilight Highlands are stern folk known for their fierce sense of independence and unique culture most attuned to the worship of nature among the Dwarves of Azeroth. A warrior society revolved around shamanistic practices, the Wildhammer strive to protect their homeland (and the Alliance they recently joined) free from any incursion.


Racial Identity
When the Wildhammer marches to war, it was truly an impressive spectacle. The fearsome Gryphon riders soaring in the sky, while the tattooed warriors stand in columns and massive siege units prepare their payloads, their fighting style all emphasizes on attack, speed, and versatility. One might be surprised, however, that given the inherent image of Dwarves' melee prowess, the Wildhammer cannot rely on the might of their close combat only but rather on the various support of ranged attacks combined with nature magic.

Any aspiring Wildhammer chieftain thus needs to master the combination of the three elements in order to maximize the potentials of this faction.

Fast Structure Build
Even when having close ties to nature, the Wildhammer clansmen are still skilled builders, able to build structures faster than any men or Elves when enhanced by a mug of their home-brewed ale.

Foragers can power-build with their Drinking Ale ability.

Salvageable Structures and Mechanicals
Residing in the rugged and harsh environment augmented by their feral way of life, the Wildhammer lack any permanent industry thus relying on whatever resources they can utilize. Each structure or mechanical unit destroyed by the enemy gives a portion of its cost back to the player.

Unique Defense and Additional Resource Gathering
In addition to the worker type Forager, the Wildhammers' main building is able to produce the Gryphon Nestlings. Although small, these young Gryphons are fearless helldivers, relentlessly repelling the invaders when the Wildhammer's base is attacked. They also perform a critical role of courier, delivering important messages between main buildings. Every time they finish their distribution, an amount gold is generated, allowing for additional resource gathering skill.

Ground Units
The Wildhammer warriors has long viewed the Dwarven plate armor as cumbersome and impractical. They develop their own fighting style based on the principle that the best defense is a good offense. The abilities and upgrades on non-spellcaster unit are specified to enhance their offensive abilities.

Air Units
The Wildhammer aerial cavalry is an instrumental asset in the Alliance force. These Gryphon riders were assigned to various tasks including reconnaissance, raid, and even large-scale assault.

With their dazzling display of airmanship, the Skyraiders are anti-air units who can also be found at the frontline, dropping Fireforge Bomb to create havoc at the enemy base before the main force attacks, while the Windwarriors are a cadre of elite Gryphon riders able to strike multiple enemy units, their spirit of camaraderie reflected in their Gryphon Brethren ability which allows them to increase their attack damage based on each Windwarrior produced.

Shamanism
The spiritual leaders of the Wildhammer Clan and stalwart defenders of their clan, the Shamaness wield the purifying Wind and Lightning magic, while the Theurgists conjure the wrathful aspects of Fire and Earth magic, both marching together with the Wildhammer warriors to war. They are joined by the enigmatic Pyro Dragons, masters of trickery and hunters of evil mages.

Wildhammer Heroes
The warlords, strategists, and most powerful combatants, the Heroes are the Wildhammer's finest, standing fearless in the face of any foes. Their courage inspires their army to follow them anywhere, even to the depth of abyss. 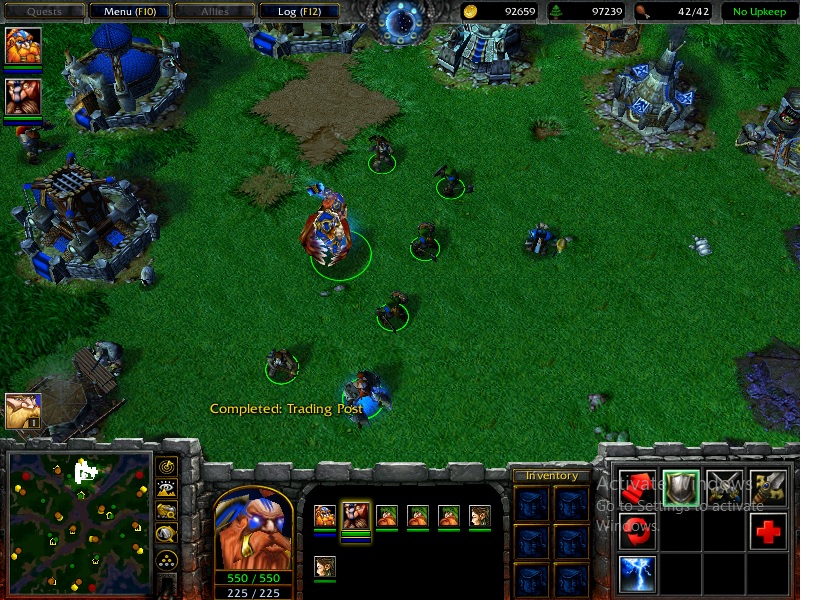 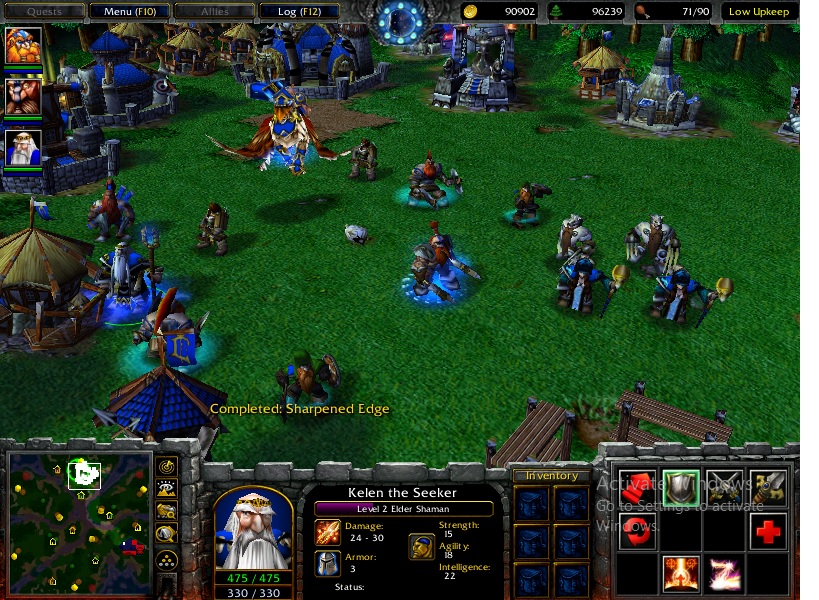 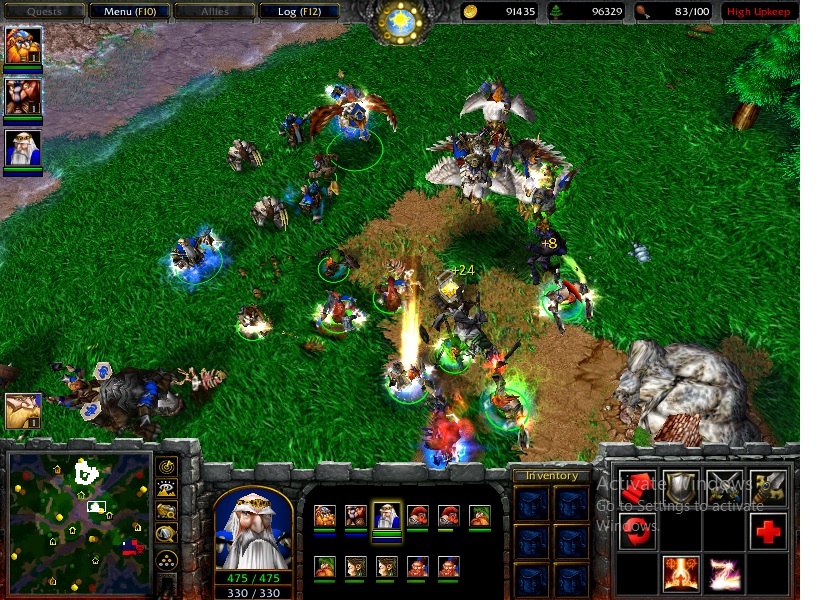 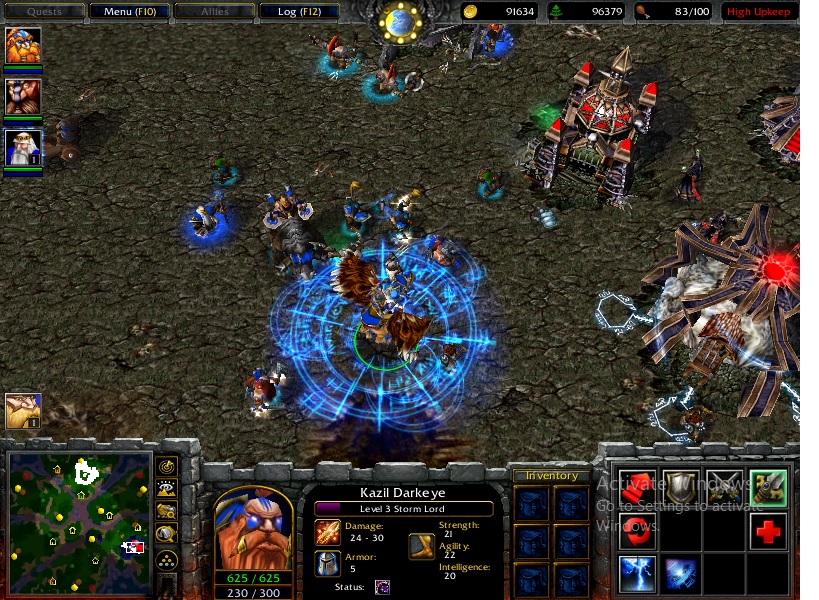 To play this faction, please select the 'Wildhammer Dwarves' on the in-game menu (playable in WC3 classic only)
Honestly, I did a poor job in keeping records of the authors of resources used in my map, feel free to let me know if I used your model/skin/icon/spell or anything but not yet documented it in the Credits tab below.

This custom race is my attempt to contribute something to this community (and partly to give me a sense of completion after abandoning this since 3 years ago :|). It is still far from complete, thus I would need your help, especially in spells and abilities, later in the Requests section. Attached you can find the .w3x file, to keep you updated with the progress.

Please stay safe and healthy, especially in these trying times!

- I would make "Drinking Ale" an upgradeable ability.
- Nestlings are nowhere to be found.
- If you are following lore strictly, than Mountaineers are more of a Bronzebeard clan's units than Wildhammer's. I would change them. Also, their upgrades are boring. You could go with some guerrilla-inspired abilities. I think it would fit them well.
- I would reduce armor of Berserkers to 0 and give them even more damage. Glass cannon unit. Maybe even an upgrade that gives them small crit chance.
- Shamaness's "Celerity" ability needs mana cost.
- Theurgeist is missing his last ability - Entomb - and also, his Fire Shield is just bland copy of Lightning Shield. You need something else here.
- Not a big fan of Pyro Dragon. Makes no sense in Wildhammer line-up. I would rather go with some kind of Wildhammer Dwarf Totemic/Runemaster/Primalist or if you want it to be a flying unit, than some kind of elemental (lightning, storm or similar).
- "Burning Hatchet" upgrade doesn't work.
- On "Barding" it is only written that it is used by Scalehide Riders not Berserkers.
- Not a big fan of "Demolish" ability on a siege unit. If they are supposed to be a supportive unit, I would rather go with that route, giving them some kind of AoE-unit affecting ability.
- I would rather use this model for Catapult: Dwarven Catapult and rename it into Boulder Thrower or something like that. Also, I like that idea that you want anti-infantry ability on the siege unit, but copying it from Mortar Team is a big no in my books.
- Fireforge Bomb ability is missing from Skyriders.
- You also need to diversify a bit attack and defense stats of Gryphon Riders. At the moment, they are just too similar.
- Elder Shaman doesn't have an ultimate ability.
- I would completely rework Storm Lord hero. Would call him Lord of Reins, and use this model: Hero_Dwarven Ramrider. His skillset would revolve around supporting friendly units and his ultimate would unlock flying form for him, where he would lose a bit of armor and damage, but would get an ability to fly in return (and use model that you are currently using for him.)

- You are also missing 1 more hero, an unique item shop, some icons are unfitting, especially for buildings, and I also have an idea for 1 elite unit for them, but gonna write that tomorrow, if I find some spare time.

Keep it up, your race has potential.

Just here to let you know that the Gryphon Rider from Scars of Conflict which you are using was made by [email protected] and Dawn, with texture and icon work by Mr.Goblin. The latter may be listed as "DonDustin" in the resource pack until I update it but they are to be credited as "Dawn".
I was not involved in its making and therefore need no credit.

The Falstad / heroic Gryphon Rider model is curious, I've never seen it before. Where did you find it? It looks awesome.

Deolrin said:
The Falstad / heroic Gryphon Rider model is curious, I've never seen it before. Where did you find it? It looks awesome.
Click to expand...

Interesting. Wonder who actually made it, since the poster doesn't seem to be the modeler.

Deolrin said:
Interesting. Wonder who actually made it, since the poster doesn't seem to be the modeler.
Click to expand...

He is the author of those resources, except for the blizzard hidden icons, and the dessecator model, wich he mentions his actual author

stein123 said:
He is the author of those resources, except for the blizzard hidden icons, and the dessecator model, wich he mentions his actual author
Click to expand...

Understood. The Dessecator is one of the only other ones that I noticed, and I recognized it as [email protected]'s work, which is why I doubted it.
Thank you.
You must log in or register to reply here.