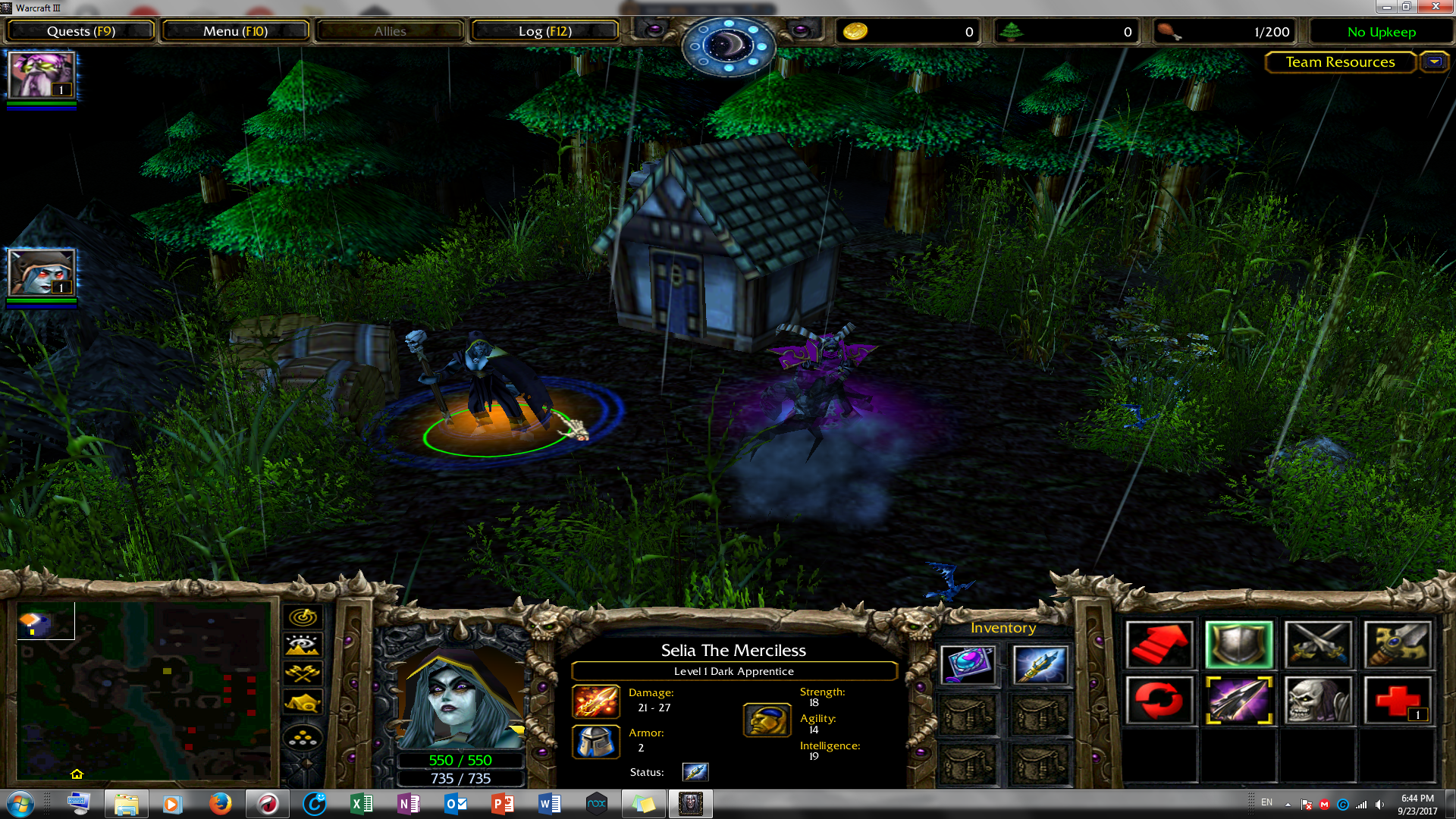 This bundle is marked as approved. It works and satisfies the submission rules.
View usage Statistics
Reactions: deepstrasz
I did this thing like 3 years ago with Homer's permission but forgot about it cause of exams, now that he's made such huge updates to the original i'm not too sure about this thing...

The edit just includes an extra hero character Named Selia The Merciless, her class is a "Dark Apprentice" as she is the student of Amandus Cambria. I wanted something that would make sense, so "Selia" was born.

So things wouldnt be confusing I edited both character's abilities,
Amandus Cambria's abilities are all the same except that some of the models for his summons are changed. (since it's been so long since I edited this, please tell me what they are from)

Selia will technically have weaker abilities than Amandus, but some are definetly different, for example she summons zombies instead of ghouls, has the ability blink instead of carrion swarm, the summon raise dark minion as her third ability (which Amandus has immediately). her final ability is animate dead, except this one isn't permanent like Amandus's, its basically the original.

also cause homer mentioned it, i removed the fence cause it's definitely in the way.
Contents

deepstrasz
The other, original, version was approved. The initial author endorses this one too. I've played the primary map way back. However, I feel the description is lacking compared to the one in the first map's thread. Approved.
Read full review...

Maps 4
What are you doing?
The Necromancer - Reanimated Edition

@Homor what say you? Should I block this or not?

deepstrasz said:
What are you doing?
The Necromancer - Reanimated Edition

@Homor what say you? Should I block this or not?
Click to expand...

Well, he said he had permission, let's se if he proves it.

deepstrasz said:
What are you doing?
The Necromancer - Reanimated Edition

@Homor what say you? Should I block this or not?
Click to expand...

I gave my permission for this project a long time ago and I'm quite happy to see it completed. But I would like it renamed "The Necromancer 2P" or something along those lines to properly advertise the change.

And @suhaild23, Don't even worry about the "huge updates" I made! This version is still great and definitely distinct from the original experience as is! Nothing I added into the new version is so critical you're going to miss out on much.

The only major change that I'd like to see in this version is that I got rid of the square fence around the wheat in the first town to make navigation easier.
Last edited: Sep 24, 2017

Gonna try it tomorrow with my lil bro <3.Expect a review.

Maps 1
Lol, I originally did this cause my lil sis wanted to try playing two player and she happened to see me playing this one so.... anyways this is just a noob attempt at making something multiplayer.

Too many enemies? HA! In the enhanced version I've got minions balls to the wall. Not to mention if you're going to have a map with multiple players that uses dead bodies as a resource, you'll need a ton of things to make those bodies.

You did a great job with this map. My original map translates very well to co-op gameplay. It gets pretty chaotic with two players raising massive hordes of zombies, kind of racing against each other to have the biggest army. That's part of what makes it such a blast!

I often toy around with the idea of making a sequel to my original map. If I do, I really want co-op to be an ingame option, because this is a delight.

Homor said:
I often toy around with the idea of making a sequel to my original map. If I do, I really want co-op to be an ingame option, because this is a delight.
Click to expand...

If you really do end up making a sequel though, I think you should focus the story on something along the lines of Amandus stuck doing the demons dirty work for a while. For example, if you were to make this a series, you should probably make a map where he is stuck working for him, (you know like a couple of tasks or something) and at the end he finds an escape.

Though this is how I would do it, you don't have to if you don't want to.

Maps 7
Interesting, Amandus' story was continued in my "Gideon" map series. In the first part, you fight your way through a massive undead army until you reach him, and he surrenders almost immediately. In the second map, he offers to help you bolster your forces with his new abominations. In the final chapter, it's mentioned that he died with a guilty conscious after Gideon was finally defeated.

There are a couple of ways to go about a sequel. One would be like you suggested, Amandus forced into servitude by Gideon, raising dead and causing chaos until the hero "frees" him. You could also have it so it's set during the second chapter, where Amandus is free and using his undead minions to fight off Gideon's Faceless Ones.

I've also been toying with the idea of setting the map after everything, with it focusing on a new Necromancer who follows in Amandus' footsteps. Amandus would be dead, but not free to pass on. He'd find himself indebted to the Angel of Death for his crimes against the balance and his phantom would return to the mortal realm to train a new legion of Necromancers to fight against evil. You'd be a good guy fighting cultists, demons and/or bandits.

The really cool thing about this setting and timeline I've created is that it's extremely flexible, so I can do almost anything I want in it.

Homor said:
The really cool thing about this setting and timeline I've created is that it's extremely flexible, so I can do almost anything I want in it.
Click to expand...

That is true. I personally like wrighting up stories every now and then and I can see that this one has a lot that you can do with it. It has little outside information besides what is in the game so you can add just about anything to it. Heck, you can bring back the scarlet crusade as a sudden encounter on the reason of "investigating the sudden silence of occupied town"

Maps 4
The other, original, version was approved. The initial author endorses this one too.
I've played the primary map way back.
However, I feel the description is lacking compared to the one in the first map's thread.

Approved.
You must log in or register to reply here.

W
2P NightElfX01 by Will

W
2P NightElfX02 by Will