The Scenario
'A tide of undead has swept through the known world. Few now remain to oppose them. Three weeks ago the undead hosts invaded the northern Kingdom of Cecia. The country is in disarray.

Elbury the Stalwart, Captain of the Guard, travels to the town of Lorne Mire where a massive undead force is soon to arrive... Lorne Mire rests at a choke-point, standing between the Northwest and the overrun south. To buy time for the North-Western armies, Lorne Mire must not fall.'

It is a sombre evening as I write this letter, I must humbly beseech you for aid in defending our humble town of Lorne Mire. You can only be well aware of the doom overwhelming our fair nation of Cecia, much as it is the entire world. I understand you must be preoccupied preparing the defences of your own fiefdom, but I must emplore you: ride with haste to save the gentle folk of Lorne Mire! I ask not out of selfish desire, but rather because our humble town rests at the centre of a bottleneck twixt two mountainous ridges; to defend our lands is to defend your own!

Your own forces must be meagre after the levies were called by our late King, may he rest in peace, but so are our own. Our town has been weakened immeasurably. The Mayor of Lorne Mire, Gedric, revealed himself as an agent of The Forgotten and their sinister ideology. During the night he and his ilk slaughtered a good portion of the garrison before fleeing into Clergy lands. There he awaits his masters, hiding behind a contingent of mind-controlled parish warriors.

Not only this, but during the rebellion hordes of monsters descended upon us, carrying off those defenders who did not die repelling them. The monsters have no doubt been driven north by the marauding undead. Whatever their purpose for kidnapping Lorne Mire's soldiers, they must be stopped and our men returned to us.

Ride to Lorne Mire, rally whatever civilians and allies that can bear arms and prepare for combat. Equip our militia for battle and drive back the monsters. Then you must surely bring justice to the traitor Gedric, curse his name! Then together we will make ready the defences. The undead will arrive shortly and, should they break through the bastion of Lorne Mire, it will mark the end of civilisation, perhaps all life.

Should you emerge victorious, however, you will be hailed saviour of Lorne Mire and surely all of Northern Cecia. If we fall... the alternative is almost too terrible to consider.

P.S. Please do not be alarmed, but I must announce that I have had reports that one of The Forgotten may lead the undead force approaching... if that is true, I'm afraid our cause may truly be lost...


*****
The Mustering has returned in its final major installment. The Mustering of Lorne Mire is a single player scenario / 'campaign style' map that has been updated since 2013, but now features vastly improved mechanics, cinematics, models, music and content across the board.

The Mustering of Lorne Mire is a defensive 'campaign map' that can take approximately 50 minutes to complete. It is intended to be fairly difficult, taking the time to find secret characters, efficiently managing upgrades from the blacksmith and unit preservation is the key to victory. Save often.

The definitive edition also adds a whole new area to quest in: The Parish. This rural area outside of the city is defended by a troupe of mind-controlled templars. Can you end the threat they pose and bring justice to a revamped Mayor Gedric before they join the undead in their assault?

Please notify me if you find any bugs, the latest update was very large and although I have playtested it multiple times it's definitely possible some bugs have snuck through.

Basic Instructions
Basic Instructions
Follow the instructions provided in the cinematics and try to keep as many of your men alive as possible. You can rally civilians by moving your hero next to them (please note, only 'militant women' will fight for you, though they will all interact with you upon selection).

Make sure to upgrade your troops at the blacksmith and buy items at the market.

During the siege you may need to retreat to the town centre; the front gate may be overwhelmed but there are additional guards and towers to help with your final defense outside the town hall.

Throughout the map there are several secret characters that will aid in your defense, some easier to find than others.

It is advisable to start by rallying all possible civilians, then targetting the kidnapping monsters and then moving into parish territory.

See if you can find the three secret characters!

Credits
Models:
I have used the following imported models, big thanks to the creators: 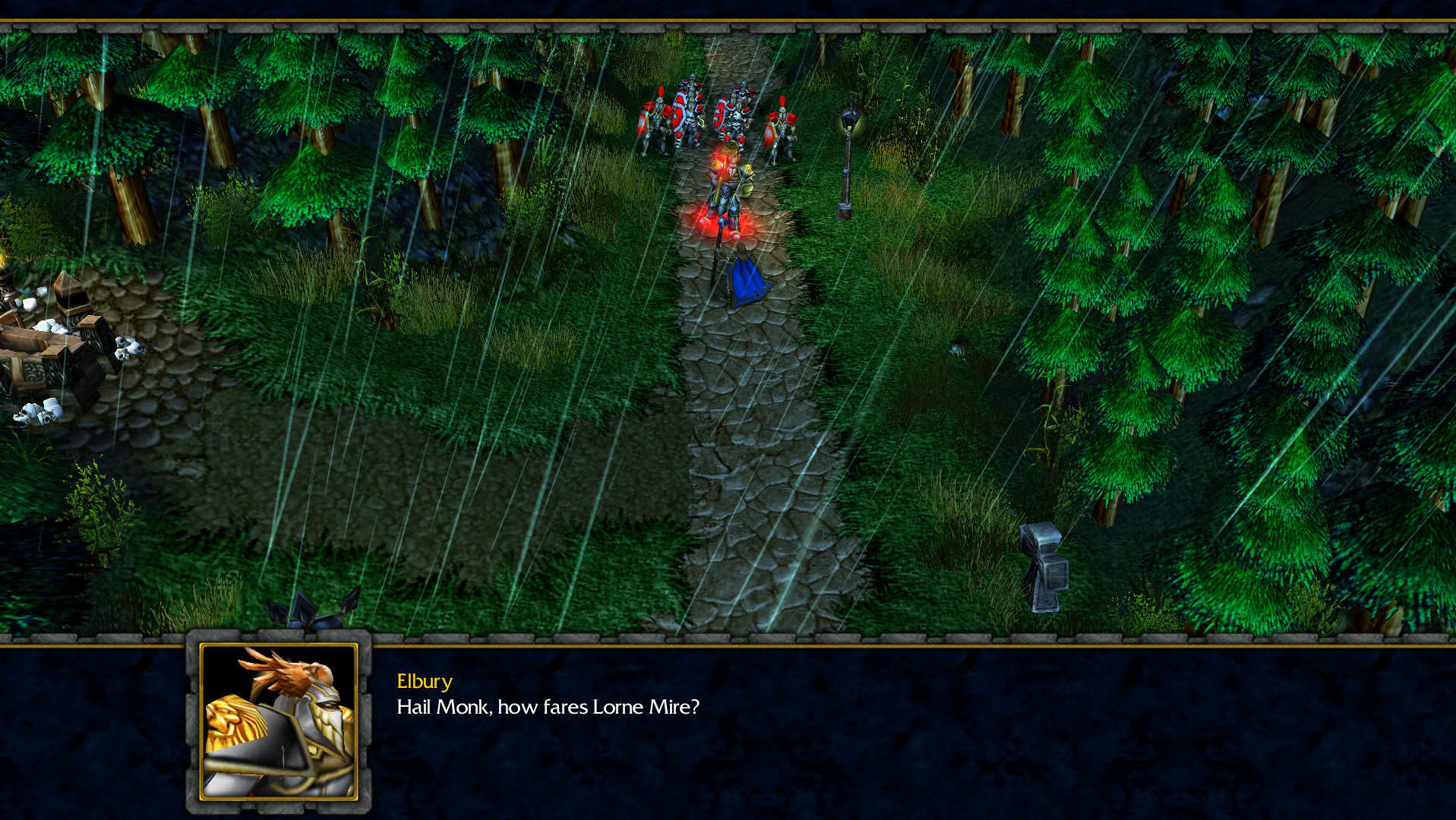 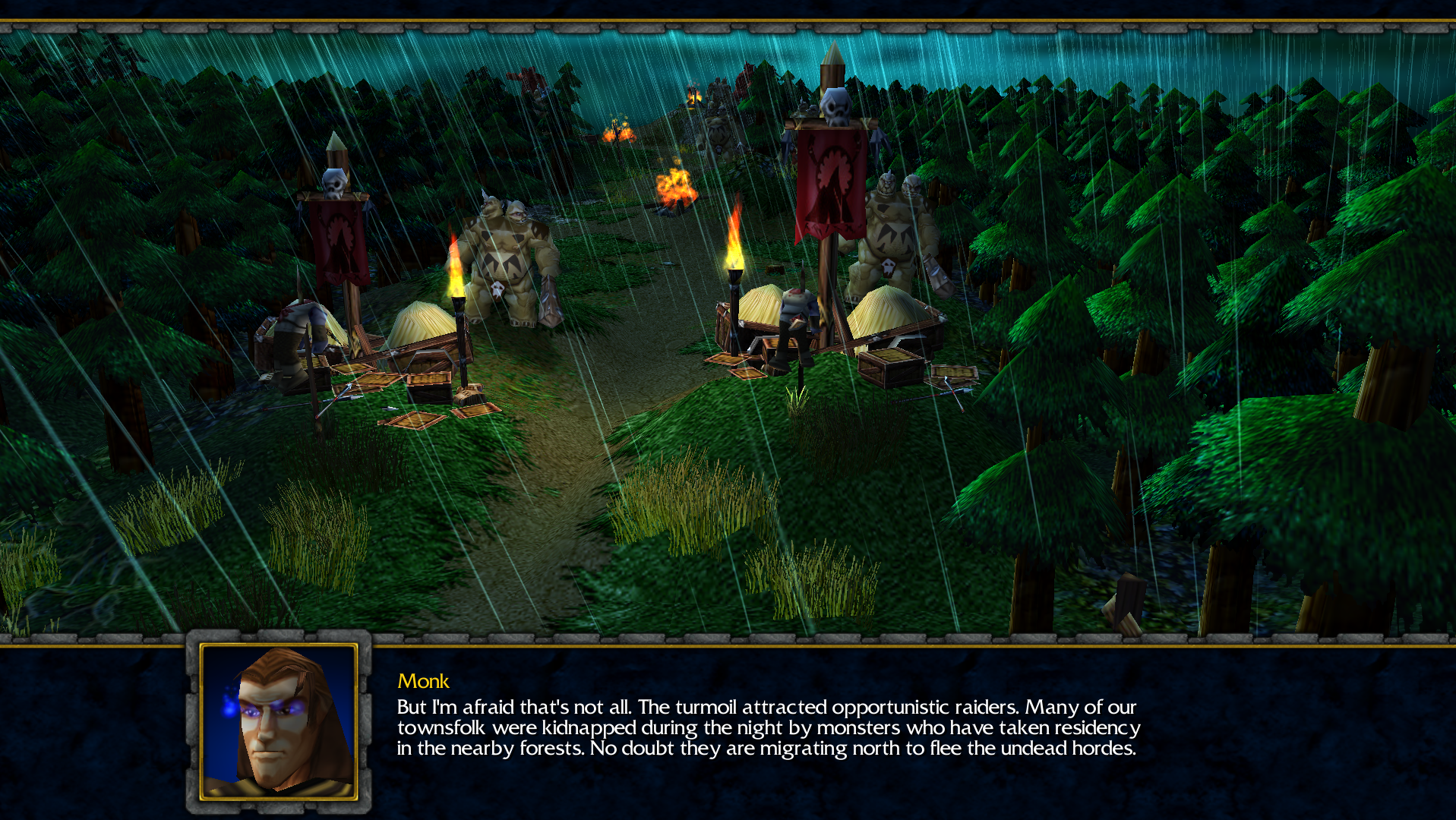 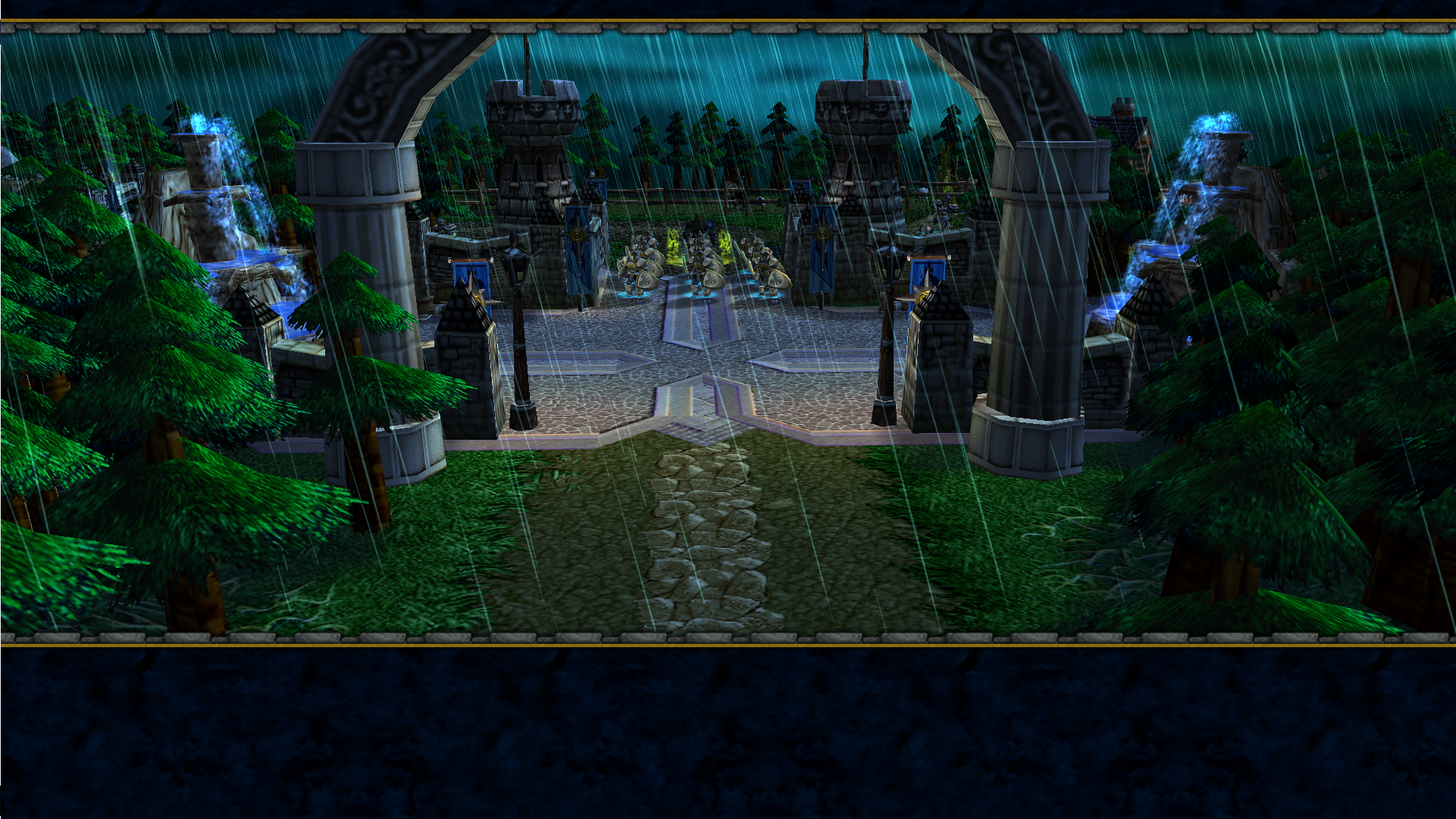 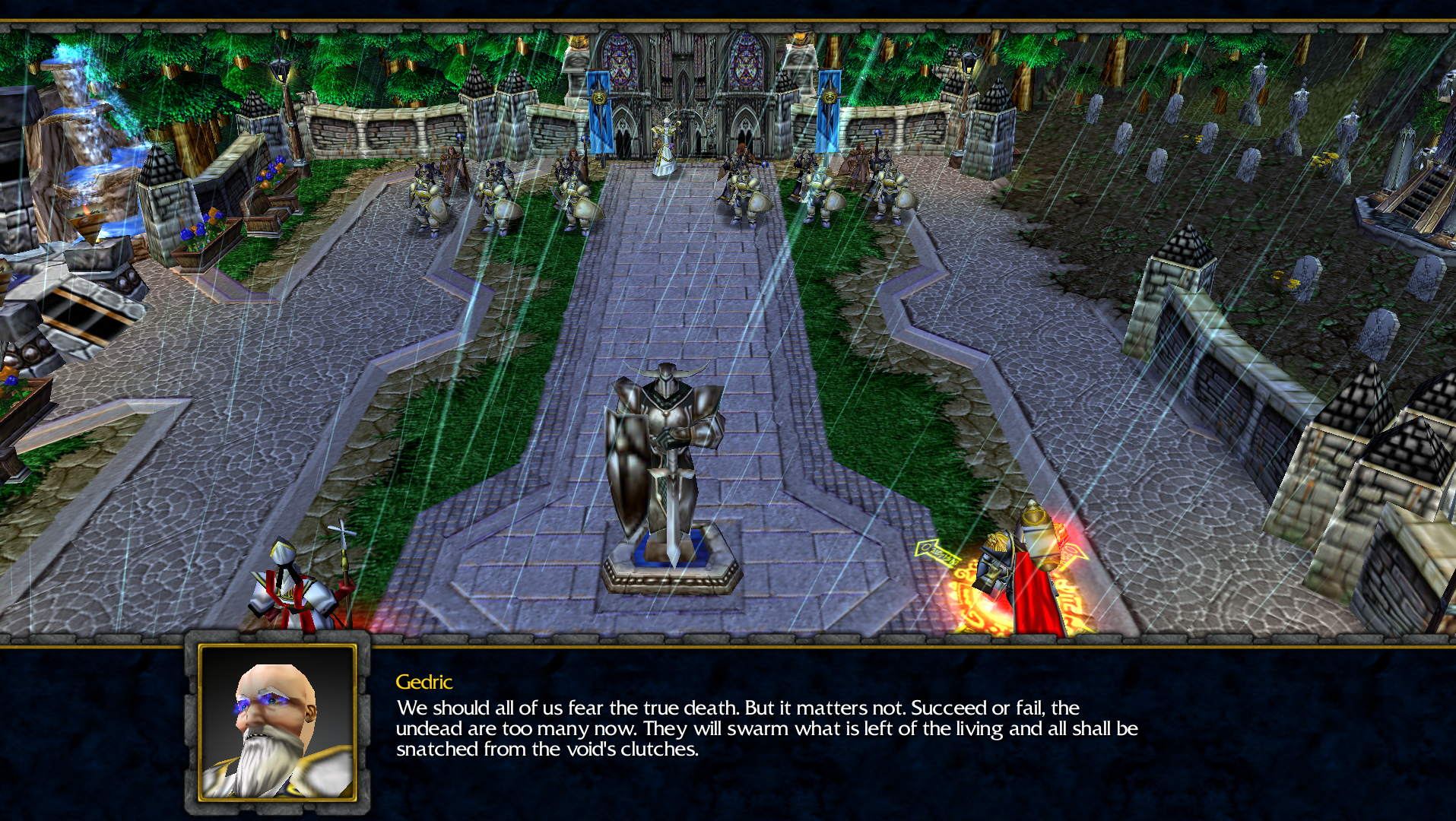 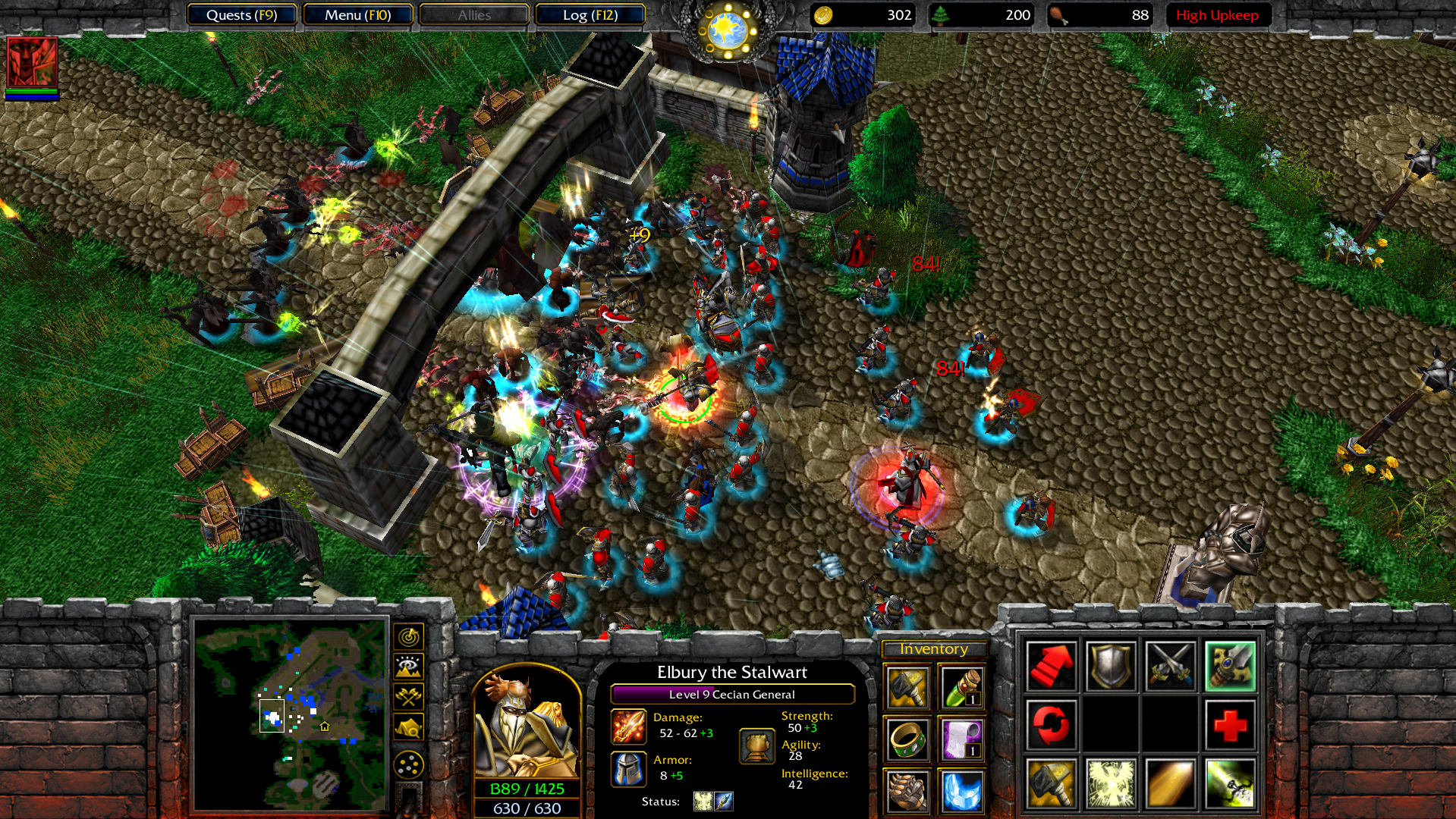 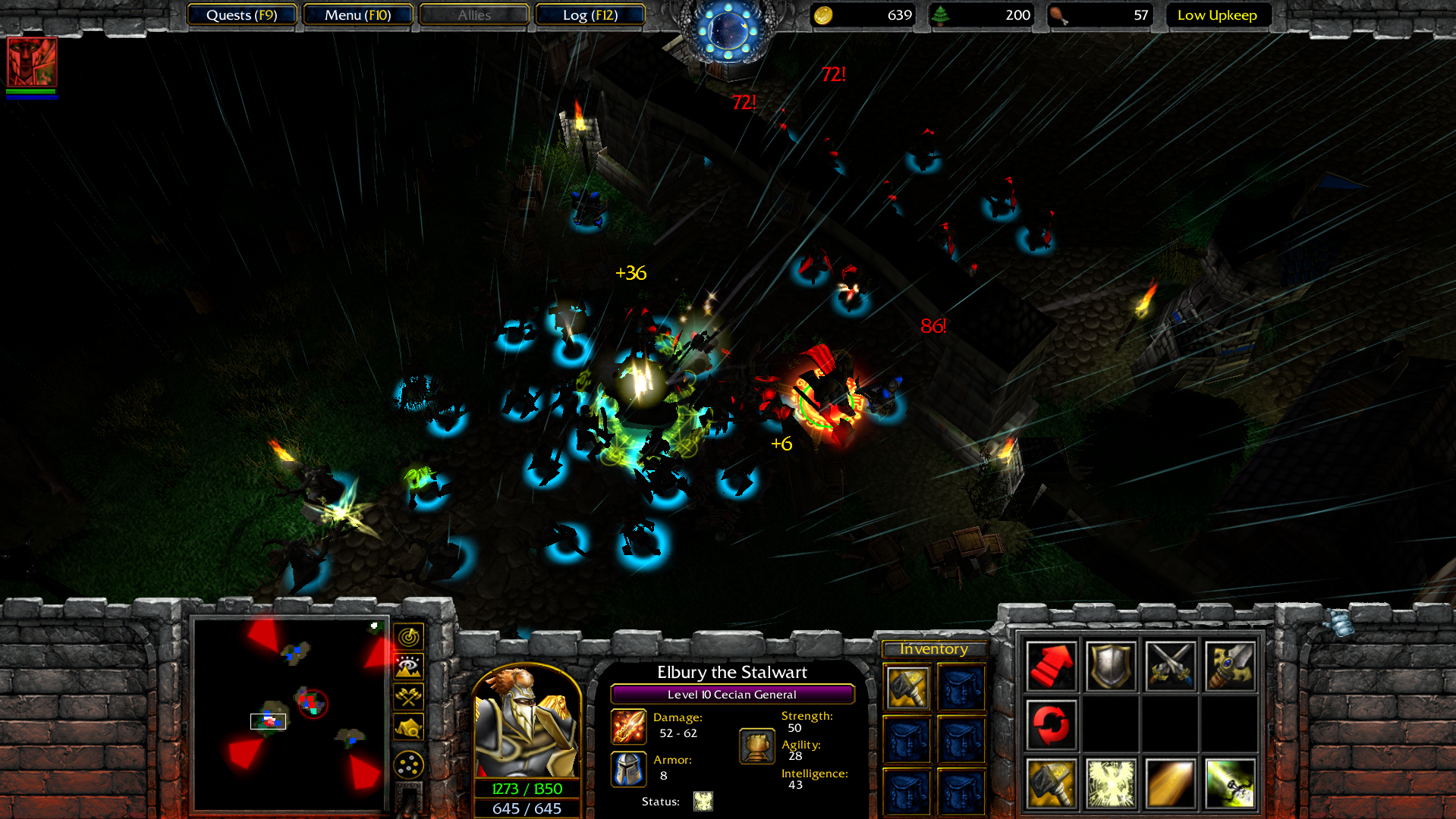 Update List
08/08/2014: Added a custom preview image
10/08/2014: Sweeping terrain, model and map improvements.
12/08/2014: Fixed some sound bugs, minor terrain improvements
10/09/2016: Version 2.0 Launched, sweeping improvements across the board. Secrets added. Game rebalanced.
12/09/2016: Several bugs removed. Game rebalanced slightly. New spells for bosses, new enemies emerge from the graveyard! Defend must now be researched in order to balance the troll camp with the ogre camp. Various terrain improvements.
13/09/2016: More bug fixes. New quest added, all quests now complete!
22/10/2016: Bug fixes
14/11/2017: The secret character should no longer spawn in the incorrect position... oops. Improvements to tooltips and extensive terrain improvements. Bug fixes / trigger improvements.
25/11/2017: Improvements to terrain. Added content. An extra secret! Adjusted difficulty. Removed the strategy tag as it is tied to Risk.
22/12/2017: Definitive Edition Update. Added large amount of content, Parish Area. Improved terrain further. Improved all cinematics. Improved game functionality. Added new models, new quest. Reworked story progression. Added new upgrades, new secret character. Added easter egg. Added epilogue.
23/12/2017: Adjusted keybindings, tweaked cinematics, fixed multiple typos. Fixed several bugs in triggers. Tweaked Map Description. Added a Chaplain icon.
14/01/2017: Adjusted some triggers. Added a skip timer function after the 'Knight Eric' cinematic. Increased timer by 3 minutes because of this, now you can take a bit more time to explore and not feel rushed, but not have to wait around too long if you finish early.
17/01/2018: Added flavour text through items to every unit in the game. Fixed several bugs / typos.
21/01/2018: Made the two "bossfights" more spectacular and difficult. Several cinematics tweaked. Numerous typo fixes. Loading screen info adjusted. Numerous trigger edits. Hive description inc. Knight Eric's letter edited. Behold the Forgotten!
Also fixed extra typos and fixed other instances of cinematics not working as intended.
31/01/2018: Balance changes, the final army is largely weaker across the board. Terrain adjustments. Removed campaign tag due to request, it being only a single map. If people think the campaign tag was helpful in identifying the style of this map please let me know.
12/03/2018: Hardmode added. Bug and typo fixes. Rebalancing.
02/04/2018: Terrain adjustments. New hamlet added with a new Ogre, artifact and some "easter egg" (happy easter guys) potential for ressurection to acquire new units.
08/06/2018: Terrain adjustments, new tiles bestowed by the new patch! Balance changes, hard mode should be less sweaty. Gedric now drops a scroll of ressurection. Slight cinematic improvement.
12/06/2018: Further terrain adjustments. Gedric should now always drop a scroll of ressurection. Secret character buffed (too squishy!) Some weak shop items buffed. Some typos fixed.
18/8/18: Added 3 Unique investments (available at the Blacksmith), providing interesting new ways to defend Lorne Mire, more decision making when spending your valuable pennies!
19/8/18: Cleaned up a lot of triggers (let me know if you encounter any bugs, its possible some have snuck through). Made a host of terrain and model adjustments. Slight buff to the enemy as I felt the game is a bit easy at the moment. Whilst fighting the last encounter on hardmode the world will plunge into darkness.
20/8/18: Expanded the forests south of Lorne Mire, granting more opportunity for gold. Beware the Watcher's gaze (new flavour event for the eagle eyed, taking place at the exit North of Lorne Mire). Adjusted several sounds. Redid some flavour items. Fixed a bug where war hounds would roar eternally with no cooldown. Lit up Lorne Mire a bit more to make Hard Mode darkness less obnoxious.
26/8/18: The timer trigger was broken when some triggers were merged, oops! Fixed it, also uploaded new screenshots! Rebalanced slightly and fixed some typos / faulty behaviours. Please let me know if anything is broken!
14/9/18: Fixed some bugs (Bishop healing during cinematic, Archer Militia spawing incorrectly, music incorrectly resuming after the undead arrive)
11/11/18: Clarified some tooltips (the Dwarven Ring specifically stating that it's simply an item to sell, for example), fixed some minor audio problems, finally solved the 'units ressurect with an empty inventory' problem by simply removing their inventory ability when they die. Should stop people trying to give these units items and then being surprised when they can no longer drop them.
06/01/19: Some terrain improvements, cleaned some triggers. Again the timer appears to have been broken somehow, which has now been fixed.
07/07/19: Ideology update. New building: "The Scholar's Hall" & corresponding ideology militia upgrades. New secret character, available only to those who score the maximum possible score (hard mode + all secret characters activated & survived). Various improvements inc. development of Ogre / Troll areas. Some dialogue updates.
09/08/19: Some music improvements, trigger fixes to stop music resuming at inappropriate points etc.
12/08/19: Some triggers seemed to no longer function optimally with new update, fixed. Fixed some tooltips. Added further information to some blacksmith upgrades. Added vision of the Scholar's Hall post-upgrade. Some text adjustments. Flavour item given to M____a.
17/08/19: Fixed map description, incorrectly states map takes 30 minutes to complete.
18/08/19: Fixed some bugs caused by new updates, some sounds were not triggering. Added undead bats to final attack that will directly target structures. This should give more use to existing repair units.
30/08/19: Ideology Upgrade now grants 3 bonus militia. There appears to be a consistent error where sometimes the Bonus Upgrades (Peasant Bows, Ballista etc.) do not function properly. I've taken a stab at fixing these but I have genuinely no idea why this is happening as it isn't consistent and works most of the time. Cleaned up some triggers.
03/09/19: Cleaned up more triggers. Fixed an issue where bats do not spawn if you hit -skip. Fixed rare circumstances where the player could intentionally trigger multiple cut scenes at once.
15/11/19: Expanded starting area. Rebalanced structures / bats slightly (structures now have more armour and should not be so vulnerable to bats). Fixed some minor bugs.

WARNING: DUE TO LATEST BLIZZARD PATCHES SOME FUNCTIONALITY MAY BE SUBOPTIMAL.

Moderator
14:32, 3rd Apr 2013 Orcnet: decent map for a single player, although that timer is kinda long it would be great if you have a trigger that will set the timer off and start the undead fight for those who finish all of the quests quickly and another is...
Read full review...
Reputation Statistics
Page 4 of 5
Show Ignored Content
Page 4 of 5