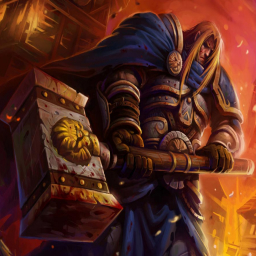 This bundle is marked as approved. It works and satisfies the submission rules.
View usage Statistics Legacy download
Reactions: sonofjay and Codric
The Harvest v1.1

This is a fanmade parody/reboot of Chapter Six: The Culling from Reign of Chaos. We know already
that Uther was removed by Arthas from duty, then Arthas purges the city by killing the villagers. This story is different,
because what if Uther decided to stay and helped the villagers to escape?

The story lets you play Uther. Malganis continues to convert the villagers into zombies while Arthas
will be played by an AI and kill villagers. Your goal is to let the villagers teleport to the portal created by Jaina.

On the other hand, Jaina will play as AI, assisting you in teleporting the villagers.

Features:
- Cinematics and voice overs from the original campaign.
- Custom spells for Arthas/Uther/Jaina/MalGanis.
- Kills/escape requirements increased to 200.
- Improved AI offensive and defensive strategy.
- Secret locations find it for your own advantage 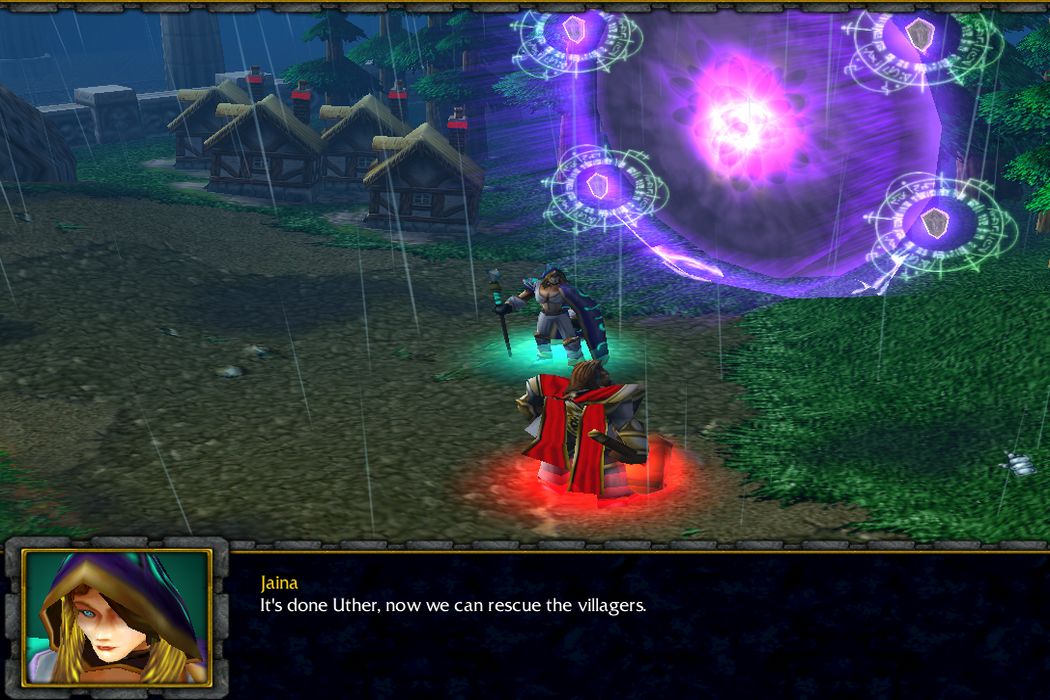 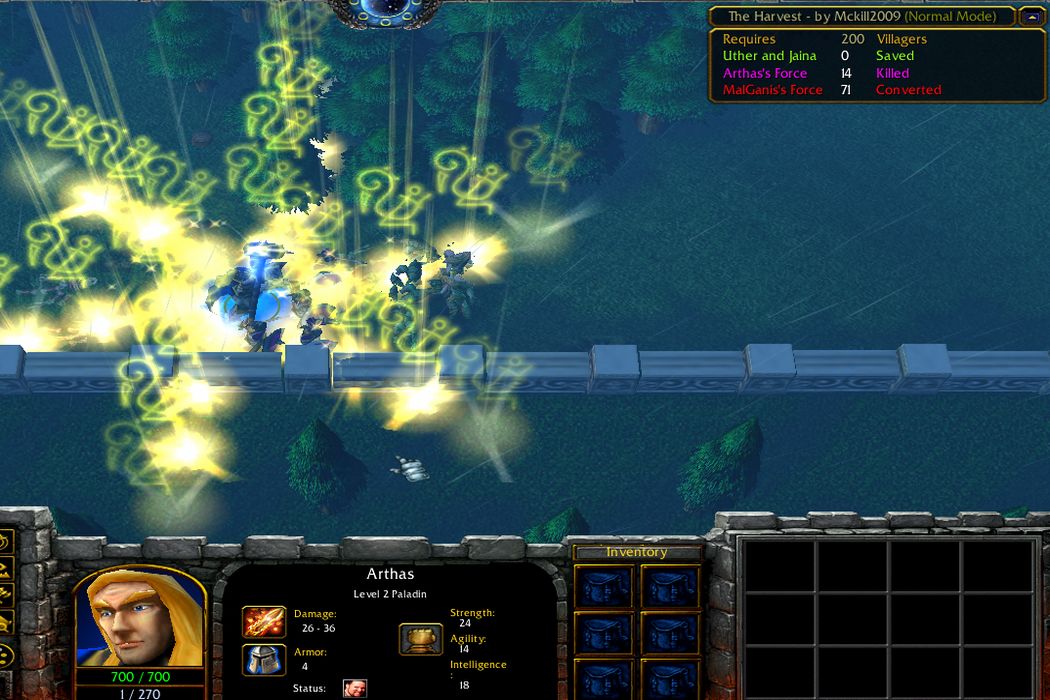 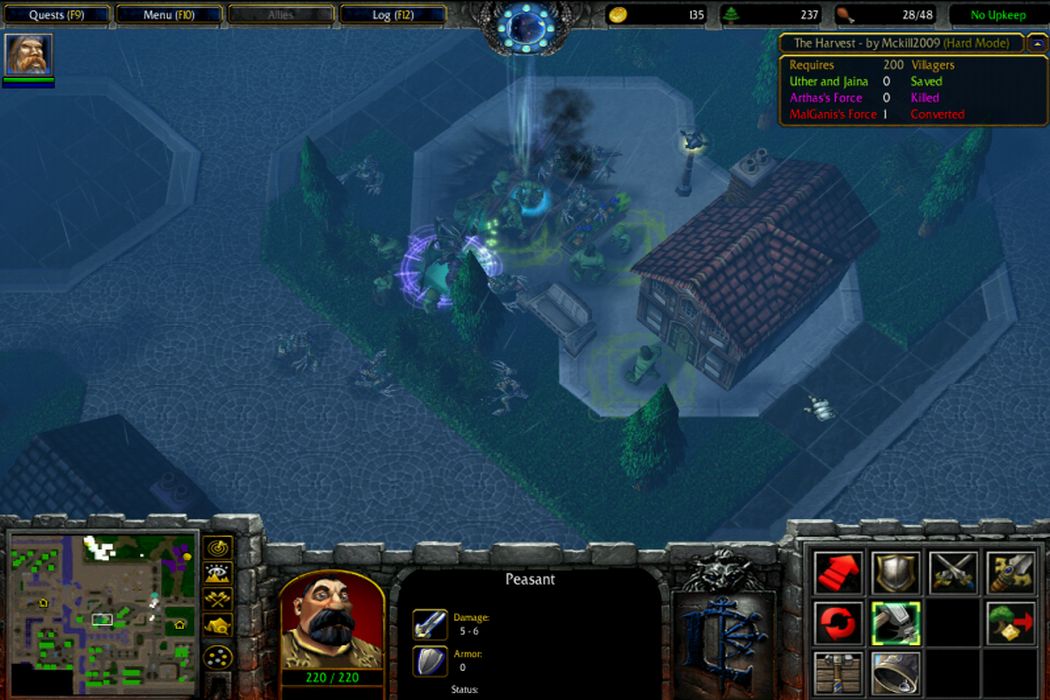 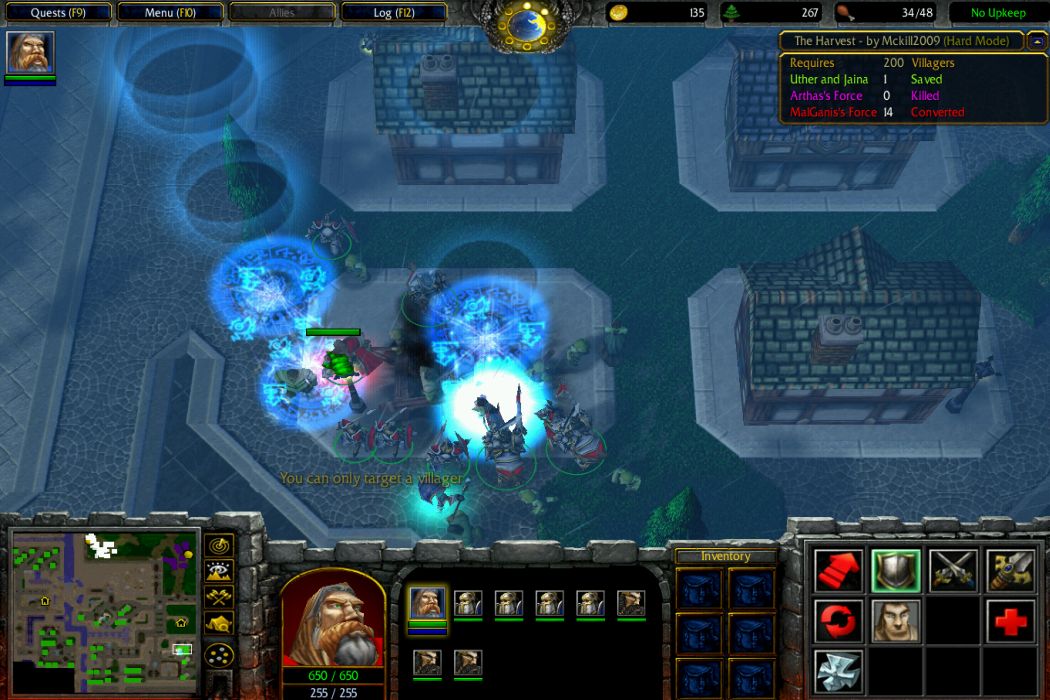 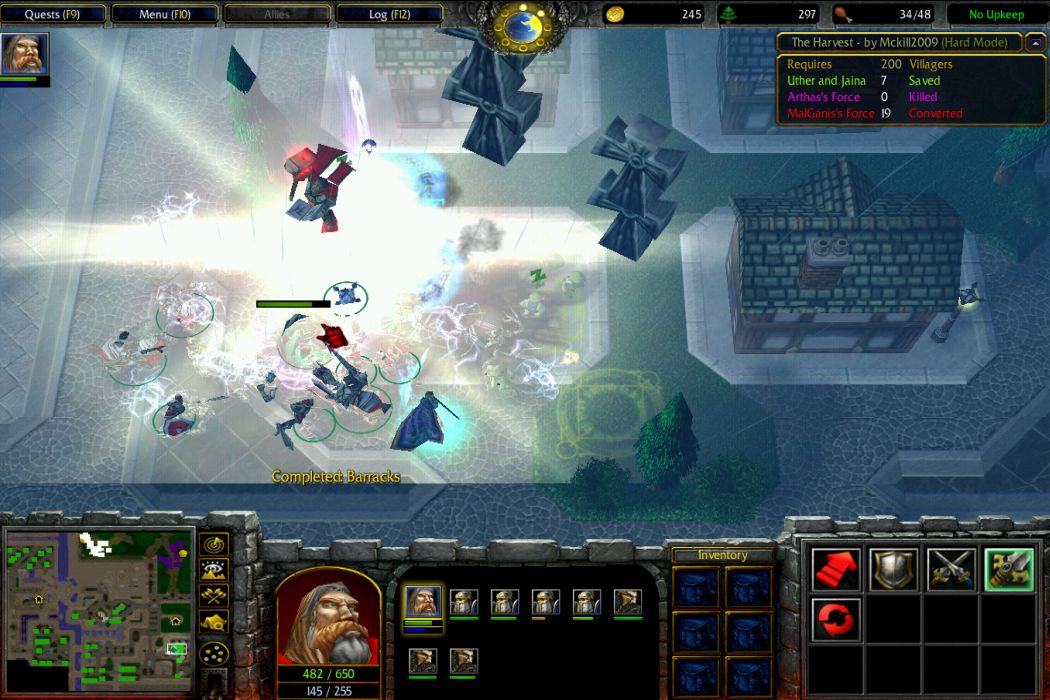 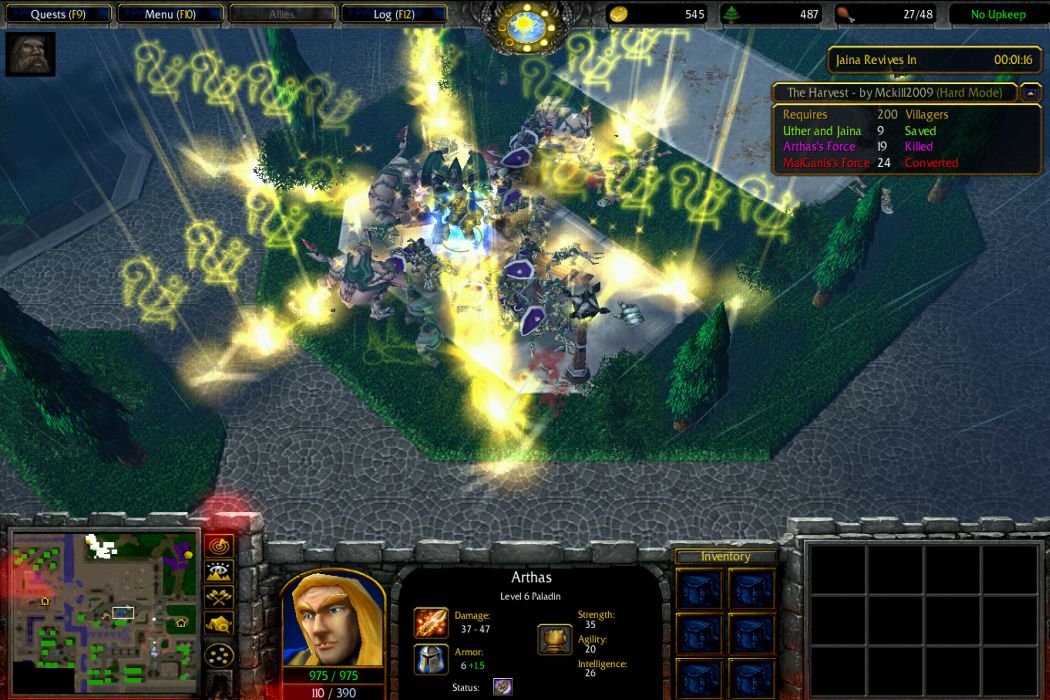 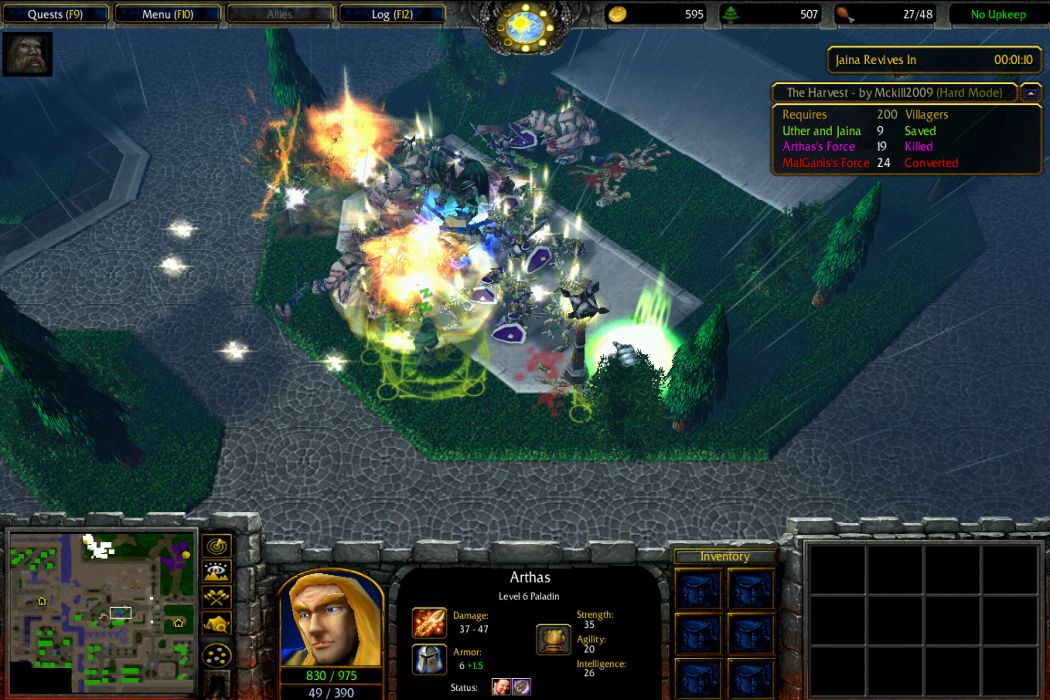 Models:
- Nebula by WILL THE ALMIGHTY

v1.1
- Fixed Undead AI that does not attack in waves
- Fixed Jaina attack Artha's force
- Gold Mine sets to 30000
- Fixed tech that's not available for this chapter is removed
- Secret locations added, find it for your own advantage

[Please do not send me a message, use Staff Contact]

Maps 9 Spells 31 JASS 2
Take note that this is a BETA suggestions are welcome...

Maps 1
Well I like that map.
I explain the my opinion:
-Would be cool If you add to Arthas and Mal'Ganis(and Jaina & Uther maybe too example for Uther from the extra dialoge folder: "I am the Hammer of Justice." ), units sounds like Blizzard did in Dreadlord's Fall Mission(undead 05) in expansion.
-I tried only the normal mode and the Light Blue Undead why passive? It only send a group of crypt fiends to Arthas at early time but later it does nothing.
-Look like you deleted every unit from the techtree in workshop but If you do not allow any siege unit remove Workshop also from building list or allow mortar team and delete siege engine and gyrocopter upgrades.
-Does not exist any blood elf race this time so please change sorceress and priest model to Roc version, and I think remove Arcane Tower also from techtree.There is in arcane sanctum a spell breaker techtree ability remove it.
-Set the amount of the gold mine at the base to 25 000-30 000 and tree hp to 150-200.
-Make little better Arthas AI, I mean add 2-3 more units to attack waves and the AI trained sorceresses but it never used them. And use Recycle unit position command on Arthas' units, the 2 footmen and 2 knights what with he strats the battle because the they just standing and Ai do with them nothing.
-Mal'Ganis should conserv the villagers during little more time(mainly he summon zombies who will attack player and not teleport them like in campaign +2 sec to duration)
-some spelling errors
-may change knights attack speed and building armor lumber cost
-could be more interesting the map with 1-2 secret
-Jaina is attacking Arthas...

This map is good fun, it shows the Culling from other perspective. Jaina Ai is cool, custom spells too. The map with updates could more better and yeah it is only beta but has potential. These were my suggestions, good luck. I give 4/5 for now because errors, but after fix 5/5.
Last edited: Oct 31, 2012

Another epic saga in Blizzard, this could have been a blizard made map if it had voices and more details in the qeuts menu

But still beta or am I wrong?

Maps 9 Spells 31 JASS 2
@Horselord12
I'll examine your suggestions one by one and update it when I have time, the AI is not from AI Editor but triggered ones that I made, so the behavior is like that, it will engage with more units once Arthas revives, MalGani's forces is too powerful though so that's why Arthas doesnt score enough...

@Codric
I'll look into that cinematic you mentioned, but yeah this is still a BETA, I need more suggestions...

Models 18
Here is my suggestion after palying the game;
Map Developement Post : The Harvest 1.0+ Suggestions

"The Harvest" by mckill2009 is parody from the Human Campaign in RoC by means adding an alternate story and game play.

"I like the twist you did for the game this makes a more dramatic and more suitable for Uther and Jaina saving the city rather than leaving Arthas with sad faces. The game is great but their are few errors, The Blood Elves haven't existed yet so I suggest changing the model of both the sorceress and priest model in RoC version, their are no dwarves in the Workshop so either remove it or add Mortar Team because that's the only siege unit that came up for Arthas in this part of the campaign, speaking of Arthas I humbly recommend to let him and his forces to attack you because that will add more challenge in the game since that is how you scripted them in the game, some undead AI's don't move directly to either your base or to arthas to attack us they just randomly walk on the city and stuff, and finally Jaina is attacking Arthas' forces? also it would be cool if she can also use her default abilities except for her ultimate."

"Nothing to explain in the terrain since you only gave space to your base which is a cool idea."

"Overall great concept but since this is beta mode I had a simple yet complicated suggestion to add, how about when saving the villagers, why not trigger them to go to your base and into the portal? that will make a more complex challenge but idk if you will implement this kind of idea, also since the undead and arthas is after them, give them a high base defense to prevent them from getting killed or taken from you that fast, to Malganis if he uses his ability convert, why not make him do a channel ability that will convert all of the villagers in an AoE area in xx seconds? instead of the default ability that makes the villager invulnerable and wait for it to turn into a zombie is kinda sad? well since this is just some of idea, I hope some of my photo shots taken in-game will get you to fix some errors, good luck and great map again."

a little parody in my map replay

loz, thanks but not yet until version v1.2 hehe, meanwhile have a rep!

why not trigger them to go to your base and into the portal?
Click to expand...

actually that's my first version but arthas's forces kills them quickly before they go into the portal...

convert all of the villagers in an AoE area in xx seconds
Click to expand...

that's my second thought, I guess that's better but Im thinking that wouldn't it be too many zombies around if I do that, anyway you mentioned channeling, well let's see...

give them a high base defense to prevent them from getting killed
Click to expand...

Arthas doesnt even score half of Malganis so I think it's better that way, since the villagers only dies because of Arthas...

About the errors, I know there are still many to fix, afterall this is just a beta and Im planning to add 30 secrets in the map, feel free to share ...
Last edited: Nov 6, 2012

mckill2009 said:
actually that's my first version but arthas's forces kills them quickly before they go into the portal.
Click to expand...

Add Invulnerability when the villagers are rescued.

Maps 1
I found a bug. Purple(Arthas' Forces), blocking Arthas after he revived, and Arthas can not pass through standing purple units at gold mibe. It occurs so often...
I think change the revive place of Arthas or place for him an Altar.

Maps 9 Spells 31 JASS 2
Hehe, thanks for the approval and rating, I never thought that this could be approved at v1.0 as there will be a major update on v1.1 and final 1.2, but thanks Venge!

Icons 3 Maps 1 Spells 22 Ported Icons 5 Tutorials 6
nice job, I dont like the mission itself but the map is still well done. 4/5

Hey man! I think the idea it's pretty cool!
Not much to say except for the part of the cinematic end: when Arthas is leaving, you could try to make Jaina's head follow him or make face him saying "Arthas! while he is leaving.

EDIT: And, In my opinion, change the Arthas's force color to blue, and do the same with Uther's units. And Jaina could be light blue or blue.

Sorry for my bad spelling!

Maps 9 Spells 31 JASS 2
Updated v1.1
- Fixed Undead AI that does not attack in waves
- Fixed Jaina attack Artha's force
- Gold Mine sets to 30000
- Fixed tech that's not available for this chapter is removed
- Secret locations added, find it for your own advantage

Maps 6
He can't help villagers to escape if they're already infected lol...

a beautiful competition between 3 groups.

Maps 1
nice idea. Multplayer would be fun. Arthas and Malganis as players

40P (10P) - Gameplay: -Not Qualified As full points due to Blizzard's making- The gameplay, although blizzard is slow but interesting. The game requires strategy, since there are many things to look out for. It's not fun, in my opinion. But it is interesting and creative.

10P - Balance: The game is rather hard, only experience Warcraft 3 players would say this is easy-and that was on normal.

20P (5P) - Terrain: -Not Qualified As full points due to Blizzard's making- Im glad you chose this map and did not change much of the map. Blizzard's terrain is beautiful.

10P - Description: The description is informative and gets straight to the point. Good screenshots are included.

10P - Structure: The game stands for what it is, and there isn't anything big you need to change about the game. Fully functional.

10P - Mistakes: Grammar mistakes are in the cinematic. I don't know if this is you or Blizzard, but some zombies go straight through me to Arthas's base.

NOTE: I am not a reviewer. No even close to a mod. xD
You requested me to review your map, request granted

Maps 9 Spells 31 JASS 2
Thanks for the brief review, however I may point out that blizzard terrains are normal, not beautiful...
Im not planning to update this though as I dont see any bugs except the grammars you said...

mckill2009 said:
Thanks for the brief review, however I may point out that blizzard terrains are normal, not beautiful...
Im not planning to update this though as I dont see any bugs except the grammars you said...
Click to expand...

Blizzards terrain isnt "wow this is stunning," but it has a great lay out and good placement. Its not to filled up and its simple, which I personally like.

Are you sure there arent any bugs? Zombies go straight to Arthas's camp straight through my units. They did that multiple times.

But if you did check, it might just be my game that did that.

mckill2009 said:
Take note that this is a BETA suggestions are welcome...
Click to expand...

Can you pls change the some spells of Uther like hes first spell , its very low and if i look at Malganis hes spells are awful und Arthas just build some foots but build a full base like casters and knights and dont use them actually can you pls fix that ?

I played normal mode. It's really easy. I think i reached lvl 4
I wouldnt call this a "Parody" (no mockery involved), so iguess its more like a parallel universe.
I ll give a rating and maybe some overall thoughts when i play hard difficulty so i can be more oobjective.
You must log in or register to reply here.