This bundle is marked as pending. It has not been reviewed by a staff member yet.
View usage Statistics Legacy download
The Cave - RPG
By Glorn

The attached file is not the game itself, due to the lack of protection offered, and the lack of updates. However, it does have all of the data related to heroes, items, quests, regions, ect. It can be used as an information resource for players. It was also a requirement to participate in the project hosting system on Hive.

Introduction:
The Cave is a WCIII styled RPG built within the SCII editor, which has playstyle more similar to an ARPG than an MMORPG. My ambition is for it to be by-far, the largest unique content-RPG made between the two platforms. It follows a loose and silly story; based around a mysterious cave, and the evil which is spreading from it. The gameplay is strongly focused on players choice and hero building.


Heroes:
Starting off basic, and with few skills, you select from Melee, Ranged, and Caster. As your hero levels, you are able to select from an A or B path for your hero, multiple times. A single hero will have 5 final forms, and 2 different ways to reach each of those forms, and 10+ abilities in their final forms. Each hero is intended to have multiple ways to be played, so not every "Paladin" is going to look the same, or use the same abilities.

Items:
Items are linked to specific slots, and each item type has a single specific stat (Heavy leggings have armor, light leggings have speed). All other stats are randomly rolled; and the number of stat rolls is based on rarity. There are 6 rarity tiers; with the highest tier removing the primary item buff and replacing it with a unique mod, such as life steal, increased buff duration, ect.

The World:
The primary hub is a castle, which is periodically attacked by evil monsters from a nearby cave. The world spirals outward from there in a series of regions. there are over 50 regions total. The entire game is scaled to 1/5 the standard size; so it is like playing on a 1200X1200 map. Content per level grows more dense with progression. The game is designed around exploration, and there is little hand holding when it comes to finding optional things. Dungeons are intended to be team events, but scale with player count, so can be solo’d, or attempted by groups of any size.

Quests:
This goes with regions, but there are a lot of quests. Some are filler, some are optional, and some are a lot of fun and share stories of the various characters you will meet. By simply following all of the quests, you should be able progress without too much grinding. The quest density after early game is 3-4 quests per level.

End Game: (Not yet complete)
Despite the massive amount of content that is required to reach end game; the end of the game is still far from the end. Once beaten, players are able to attempt heroic dungeons, partake in giant world raids, compete in a hero survival style of monster invasion; and complete additional “Repeatable/Generated” quests. Just because the story has ended, doesn’t mean the quality of loot has; which continues up to tier 18 (6 levels beyond max).


Final Version Info:
There are 9 regions left to be made, as well as 7 dungeons, and the final hero tier. Additional late game content will be added after the core is released. There will be a complete bank wipe that comes with the update; due to some structural issues that need to be addressed. April/May is my rough time-frame for that; with additional end game content being released afterwards.

Discord:
You can stay up-to-date on the discord: https:/discord.gg/c9yzK34

Closed Beta Testing
Explaining one of the hero classes 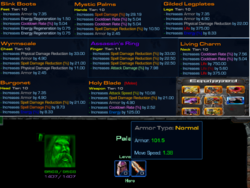 HELP!! How to make a dark and creepy cave???