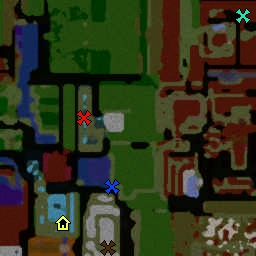 This bundle is marked as useful / simple. Simplicity is bliss, low effort and/or may contain minor bugs.
View usage Statistics Legacy download
From so long I have made a 4 hour cinematic in one map...due to the lag and to lighten the weight I divided it into 2 maps...still so many bugs were present and I also didn't use many cameras or animations...
However I have made many improves and fixed nearly most of the bugs of the first part of the cinematic and add many cameras and improved the war scenes more...this cinematic was put in cinematic forums so i can get feedback and develop my cinematic more but it has been 2 weeks since I uploaded it there without receiving any comments, feedback or suggestions about how to update it better and so I put it her in the cinematic map submission so I may have better luck...

So here is the first part...I really hope that you are going to test and use the save and load system because the first part is long so I can't ask you to watch it as a whole but I would really like to have your opinion about the part you saw and how to improve it...
One more thing is that the introduction is long without any actions so I hope you will be patient with it and give me your suggestions about how to improve it with the whole cinematic
Part 2 will be released soon if the first one succeeded and was approved
And thank you
The plot:
The World is changed!And this wasn't the first time!It was the nearly the 2nd and last one
but which led to a great change in history!It was the second time the 2 ancient worshipped_YoggSaron and C'thun_try to change time for helping the dark titan Sargares in
passing the portal...thus they could be freed from their cells and begin their last move for restoring their world!And that I cannot allow!I am Nozdormu...the dragon of time!And I
shall not make the Ancient worshipped to sucessed in their plans even if I had to make another alter to save the time!
Nozdormu the Aspect of time
The Alter of the Sunder

The Old Gods have returned again!Once in the past they had entered the time and tried to change it for their goal!Now they conquered the time again but releasing their agents and spreading their corruption everywhere to guarentte their victory this time!But for every action there is a reaction same in magnitude and opposite in direction and so Nozdormu the Aspect of time decided to do the greatest alter in time by sending HUMANS back in time but will he succeed in his plan?Or will the world meets its end in it's very beginning!Now the alter of the sunder is upon the world and no one can stop it!
The sky is rainning chaos!Demons spread everywhere slaying everyone
who stands in their way!Their numbers are too great!But still they have to face a dangerous threat of the mightyResistanceunder the leadership of
The Forest Lord Cenariusalong with the master ofThe Silver Hand Uther the Light Bringerand the humble but toughCaptain Shadowsong!Can the powerful resistance of knights,archers,huntresses,furbogs, footmen and the taurens stand the might of the burning legion?Or will the host fall and fails
to protect its world!
Queen Azhara is decorating herself waiting for the arrival ofThe dark lord of the burning legion,the fallen titan,the destroyer of lives Sargerasto
offer herself to him as his consort...but she dreams alot for she still have to study the new
threat of the desperate attackers who attempt to close the the portal and defeat the burning legion but why would she care?Not even the power ofThe druid Furion Stormragewith the ancient wisdom ofThe Dragon mage Krasusand the powerful arm ofBroxaiger the red axalongThe Great Demigod Agamagonnwill be able to DENY her or stop her future mate from passing the world and reshapping it!She is Azhara and she has nothing to worry about!
Always the today's friends are enemies of tommorrow but how can enemies of tommorrow become the friends of their future in the past?!!Wasn't those standing against each other at Ice Crown Glacier each for the sake of himself?What made them now fight together against the demons to save their
world?How they chose their path?And what force could makeThe young corrupted Prince of Lordaeron Arthas Menethilfight together with a presumed former foe?And why doesThe demon hunter Illidan Stormragereturned back again to fight with the resistance and one who he hasn't seen before!Does he fight for the
resistance?Or does he want the power of the well of eternity!And can he and Arthas secure a path to their friends and beat the demons and deny the well of Azhara?Or will they fall victim to the burning legion and the charmness of the Queen?!
The save/load system
This cinematic is about 4 hours so it's really hard to watch it completely...either you don't have enough time or will get bored...so when you want to stop at one point in the cinematic just press ESC button then when you want to continue go to SAVE folder,then to your PROFILE folder,you should then find another folder named CUSTOM SAVES!Then you should find your save file under name(The alter of the sunder1/2.w3z).Just CUT it(don't copy it)out the custom saves folder to your profile...then normally open you wc3 and load it!
The Cinematic is inspired by Richard A.Knak War of the Ancients The Sundering but I altered many events to suit my alternative story!

Filename
The alter of the sunder1(modified).w3x

[Cinematic] The alter of the sunder (4 hours) cinematic

Twilight of the Gods 2.5

Siege of the Ancients 2.5