Swamp of the Archevin Kingdom 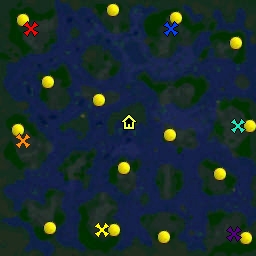 After a long while of brainstorming and marvelous executing of concepts, I gladly present to you bees of the Hiveworkshop the mighty Archevin Kingdom:

Subjects of this kingdom are experienced warmongers and engineers. The dark arts are also one of their numerous knowledge. Combining these two skills, they created engines such as the sneaky shadowwings and the mighty trebuchets, both powered by shadow magic.

Outlanders of the highest peaks of Ireland also joined themselves to the quest of domination engendered by the high king. Mystics and Berserkers show experience in invoking the power of the old gods to aid them in battle, while gallowglasses combine the protection of their heavy armor and the thunder in their mighty hammers.

All of this regrouped in an army of heavy armored warders, highly trained longbowmen and quick Hobelars. Overall, I present to you the ultimate combination of troops in order to annihilate your enemies!

May your reign last long, Milord.

Note: it is vital to build a spire from your citadel as soon as the game starts.

Some names might have been forgotten, please notify me if so.

Swamp of the Archevin Kingdom (Map)

Models 32 Icons 3 Packs 1 Maps 5 Tutorials 1
oh, so you didn't went for those dark elves you planned at the start?

Maps 3
nope, 67chrome is doing dark elves. I went for these guys, i think they are more original than some cliche mythological stuff.

i like this map and i almost feel like im reliving the time when i was playing age of empire cuz some of the units' skills and their appearance are just so much alike. You have done a great job balancing this new race. However having said that, i am not entirely satisfied cuz its simply too balanced! haha, im just hoping to play an imbal new race when i downloaded this map. XD

Maps 3
http://games.softpedia.com/get/Maps/Warcraft-3-Map-Twilight-Ruins-Naga-Race.shtml altered melee map
You must log in or register to reply here.