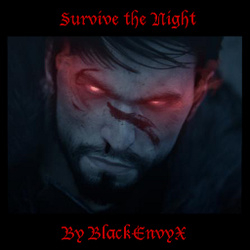 Survive the Night (Version 2.6)
By BlackEnvyX


Credits:
Terrain:
BlackEnvyX: (With the original base terrain done by Blizzard Entertainment)

Icons:
SuPa-: Infernal Icon (Used for “The Lost One”)

V. 1.3
- Massive fine-tuning of terrain (including fixing ramps, cliffs and poorly placed doodads)
- Two more warp tunnels + a couple new terrained areas
- Survivor spirit spawn point changed to more aesthetic location
- Changed some text around in triggers / objects
- Added small intro cinematic
- Imported toxic effect model made by UgoUgo
- Input a new ghost "Nature's Deathly Messenger" which kills players who go within 200 range of it.
- Cleaned and altered some existing triggers
- Fixed a glitch in which one of the Neutral spirits wouldn't move
- Computer AI updates (AI teleportation for the Lost One so it will search through smaller dungeons)
- Added two more neutral spirits
- Bridges do not collapse when first run over
- Added Survivor Leaderboard

V 1.4
- Minor Terrain Updates
- Created Icemancer spirit (wherever it walks, the terrain changes to ice, and if a survivor gets near it, they will explode in a frosty blizzard)
- Imported the SparksExplosion model by WILL THE ALMIGHTY and the Bladestorm by JetFangInferno
- Replaced Ice tile with Dark Ice and added the Leaves tile
- Walking over ice now damages Survivors same as lava
- Re-did lava damage triggers (cracked lava now deals two damage per second as well)
- Reduced the movement speed of the boy and girl haunted spirit from 522 to 345

V 1.5
- Added the dungeon's lore / backstory (you can read it in quests!)
- Two neutral spirits added
- Moderate terrain updates (sealed off some paths, opened up new ones, new clifs, doodads)
- Changed the fog in the ice area and added fog to nature and volcanic areas
- Nature's Deathly Messenger now turns whatever he walks on into leaves
- Reduced Icemancer's speed from 522 to 200
- Removed some unecessary triggers + Changed some existing ones
- Changed the Male and Female ghost's spawn time from 120 seconds to 360 seconds
- Added Pyromancer
- Removed Upkeep text in upper right corner
- Renamed Messenger to Naturemancer

V 1.6
- Increased Map Size to 128 x 128, complete with new terrain and connecting areas that have been added to the map, such as a huge forest, an ice plain and a small lake
- Moderate terrain changes (Mostly fine-tuning with the exception of the brand new terrain)
- Another neutral spirit added
- Changed some minor text and fixed some spelling errors
- The Lost One can no longer kill trees
- Geysers have been added. If a Survivor walks near a Geyser, they will lose 20 health and be shot to a random spot on the map. There are five geysers and they can only be used by Survivors
- Changed the Male and Female ghost's spawn time from 360 seconds to 960 Seconds

V 1.7
- Fixed a spelling error
- Changed some text
- Added two more Geysers
- Added two more Warp Caves
- Minor terrain adjustments
- Added the Ghostly Spire. This is the tower where the Male and Female Ghosts will now spawn from (along with any other future hostile ghost additions)
- Moved Survivor Spirit spawn point to where the old Male and Female Ghost Spawn was
- Changed Male and Female Ghost's spawn time from 960 Seconds to 1000 Seconds and moved their spawn point to where the Ghostly Spire is
- Changed Naturemancer's spawn time from 240 Seconds to 300 Seconds
- Changed Price of Potion of Invunerability from 75 Gold to 35 Gold
- Changed Price of Dungeon Orb from 25 Gold to 15 Gold
- Added two more of the "Spiritual Item Generator" item shops across the map
- Added Manual of Health to the shop. For 15 Gold you can increase your Survivor's HP by 10
- Moved all of the Survivor starting points slightly
- Changed The Lost One's color scheme from 100, 100, 100 to 255, 255, 255
- Added more to the Lore Section
- Fixed a glitch where the Pyromancer's Special Effects spawned on the Icemancer

- Map size increased from 160 x 128 to 160 x 160 (New area currently unused to set up for big surprise update in V 2.0)
- Minor terrain updates to existing areas (Mostly along the border of the new area)
- Added the Glyphs of Healing and Energy to the Spiritual Item Generator shop and set their cost to 10 gold each
- Edited some tooltips
- Replaced the Lost One's model (New model by -Grendel)

- Tooltip updates
- Removal of version updates in quest menu to reduce clutter
- Major terrain additions to upper end of map
- Minor terrain alterations to rest of map
- Added another Spiritual Item Generator to the map
- Added one more wandering spirit
- Added the Waterlogged Winder (Spawns in lakes and travels
to random lakes across map attempting to attack players in its way)
- Added two new Geysers
- Added the Soul Reaper (A deadly powerful unit chained to a magic
force zone that will attack any survivors that wander into it, it is
incredibly slow however)

- Minor terrain changes
- Added another Spiritual Item Generator
- Added "The Totem", a wandering frozen entity that traps any survivors near it for seven seconds
- Updated Quests
- Changed the name of the "Shadow Teleport" spell to "Shadow Walk"
- Increased the range of the "Shadow Walk" spell from 750 to 900
- Updated tooltips and game interface text

- Changed starting location for The Lost One
- Updated AI (Survivor AI won't blindly run into The Lost One or the Mancers anymore, and will actually run in the opposite direction when said enemies approach them)
- Added an eleventh survivor slot (with working AI), for larger and more chaotic matches
- Added AI health regeneration (this makes it harder for the AI to die overall due to damaging factors in the dungeon and balances out difficulty)
- Added the Lightning Wolf (A super speedy and chaotic wolf who teleports quickly around the map attacking players)
- Added a ping function to the Mancers, once they spawn, the survivors will see a ping on their mini-map once every 45 seconds showing their location
- Added additional names to the survivor name pool
- Edited the Suicide Spell
- Removed the energy cost for rope construction
- Updated survivor hero unit tooltips, line of sight, and select stats slightly
- Major terrain updates (fixing dead ends and pathing errors, added new connecting paths, terrain additions and reformations)
- Altered the opening cinematic text and increased its length by 2.5 seconds
- Added 3D sound to the point of Gold item spawn
- Fixed the Totem trap
- Reduced Sprint cooldown from 45 seconds to 30 seconds
- Altered spawn time for Gold from every 60 seconds to every 45 seconds
- Altered spawn time for Gylphs from every 180 seconds to every 120 seconds
- Added four more Geysers
- Added five Spiritual Item Generators, and moved around existing Spiritual Item Generators
- Added two more warp caves
- Revamped the Waterlogged Winder (Changed damage, spawn time, movement points, etc)
- Added loading screen text
- Altered game interface and display text
- Altered game constants to increase immersion
- Increased lava terrain and cracked lava terrain damage from 1 to 2 and from 2 to 4 respectively.
- Revamped the three Mancers (Changed movespeeds, spawn order, spawn time, spawned terrain, range, etc)
- Changed Wandering Ghost spawn time from 2250 seconds to 1500 seconds
- Changed Soul Reaper's model and special effect attachment
- Altered all geysers and warp caves to automatically shift the camera to wherever the Survivor ends up
- Fixed the Survivor Tree bug (where Survivors would get teleported into the Great Tree by Geysers and would be stuck for the rest of the game)

- Minor terrain additions and fixes
- Gameplay constant changes
- Trigger labeling (for anyone who wants to open the map and see what triggers I used)
- Cleaned up triggers (combined and condensed triggers as well)
- Altered quest text
- Manual of Health now costs 10 gold instead of 15, and Potion of Invulnerability now costs 25 gold instead of 35
- Changed all item spawn times, stock maximums, and priority values
- Added an "Amulet of Evasion" for 35 gold that gives Survivors a 15% evasion boost

- Removed imported UI interface (incompatible with new WC3 update)
- Altered text and tooltips
- Removed quest menu temporarily (due to World Editor bug glitching and deleting text) (They'll be back in 2.6)
- Fixed audio bug in opening cinematic
- Updated camera system to work for Players 13 and 14
- Added additional player slot / AI slot
- Lowered the gold price for Amulet of Evasion from 35 to 25, Added a Hotkey to purchase the Amulet
- Lowered the gold price for Potion of Invulnerability from 25 to 15
- Added the Crystal Ball item (Costs 15 gold, allows Survivors to search the map looking for the Lost One)


Gameplay:
- Object of the Game –
Survivors: Survive for 45 minutes, use your abilities to run and hide from the Lost One and various other evil spirits. If you die, you become a spirit that can aid living survivors.

Spirits: You become a spirit when you are killed as a survivor. You can use your multiple abilities to aid the survivors and help keep them alive.

The Lost One: Kill all of the survivors before the time runs out, nothing more and nothing less.

Multiple abilities for both Survivors and Spirits: