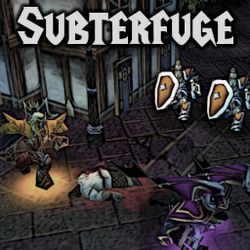 -Introduction (2019 update)-
I introduce you an update of an old map of mine (it was originally called "Investigation"). It was very popular among its very small community (actually only my friends and some random people joining our games and begging to re-host it), but some flaws remained in the game for years: there were some bugs, it had some balancing issues, the number of players (2v2) wasn't very appealing and one team was actually less fun to play for most people. This is why, years later, I decided to completely remake this map, trying to get rid of all these negative aspects while also introducing a complete reskin (the original theme was about police officers against serial killers).

-Short description-
Demons must kill innocent civilians in a small town without getting caught by Demon Hunters. The Demons have all kinds of tricks to escape and mislead the Demon Hunters, but those have superior power and a whole army to keep the town safe.

-Description-
Subterfuge is a short asymmetrical game in which two teams compete for different objectives by using all kinds of tricks and stratagems. Here, it is not about clashing amounts of damage against amounts of HP and whoever has more wins, but it relies mostly on subtle things like using tricky abilities, taking advantage of the line of sight, outmaneuvering your opponents and all the mind game around this (deceiving, bluffing and countering).

The game takes place in a small town filled with innocent people wandering around. The first team, the Demons, must kill a certain number of these poor souls before dawn to win the game. Each player controls a Demon and whenever it attacks a civilian, he will call for help (which translates into a ping on the mini-map). The other team, the Demon Hunters, who have superior means (a whole army in addition to their hero, actually), must stop the Demons by reacting to these pings. They win if they slay all the Demons or if dawn comes (which takes 20 minutes from the beginning) before the kill count is reached.

The Demons get gold and experience by killing humans. They can place Demonic Portals, the only place where they can spend their gold to buy items or units. They must be placed carefully, because they must be at the same time accessible and hidden from the Demon Hunters. The main deceiving ability Demons can use is Shape shifting, which turns them into a regular civilian, so they can wander around in plain sight and try not to look suspicious. Other tricks include the Mirror Image ability (which can be used to lure or escape) and different manners to turn invisible and escape dangerous situations. Also, a very important point is that the map is always fully visible for Demons. This gives them a huge advantage at escaping the Demon Hunters, but those also have some invisibility alternatives, so it does not mean they can see everything.

The Demon Hunters get gold and experience by collecting Lost Souls, which are dropped by civilians upon death, which means that tracking Demons (without catching them) is sufficient to become stronger. The basic strategy used by Demon Hunters is to use all their units to do all kind of maneuvers (walling, circling, patrolling) in order to corner the Demons. As the map is tile-based, it is rather easy to accomplish theses by placing units on nodes (road intersections). All units are important, but the hero (the Demon Hunter) is by far the most important piece on the chessboard, because he is the only one able to get rid of the Demons' tricks (revealing a shape shifted Demon, banishing a mirror image, revealing invisible units...). He also has his own tricks like teleporting anywhere on the map, revealing an area of the map or burning the target's mana. Noticing patterns in your opponents' moves can help you discover their build or locate their Demonic Portal (if you find it, you can set a trap there for example).

Generally, the success to this game is to try to read your opponent, discover his build and counter it. Demon builds can be sorted in 3 categories: fighting, evading and hiding. These builds can respectively be countered by 3 Demon Hunter build categories: fighting, chasing and scouting. To achieve this, all kinds of situational items and units are available for sale and the 3 hero attributes will serve that purpose as well.

-General feeling-
Playing as a Demon usually implies experiencing high stress (trust me on this one, this is really what people enjoyed about it) and feeling superior (repeatedly fooling the Demon Hunters is infinitely satisfying), whereas playing as a Demon Hunter implies experiencing high frustration (repeatedly arriving too late, seeing your target escape low HP, realizing you were chasing a mirror image etc...), but prevailing eventually (because good guys always win) feels really rewarding, especially if your plan was smart.

This map is really not "noob-friendly", so expect heavy whining if you host it and there's a skill gap between players. Balancing such an "unstable" game is really hard and people from both teams will often complain of it being "unfair". I'm still working hard on making it as balanced as possible.

-Conclusion-
I hope you'll enjoy this game and keep in mind that any feedback is welcome (as long as it is constructive). I'd also love to read your funny experiences and your ideas to improve the game.