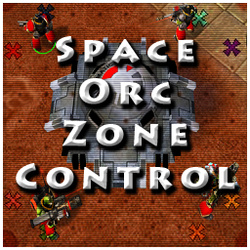 Space Orc Zone Control is a full new rebuild of the old starcraft zone control maps. It includes at the moment 1 basic unit which is the Space Orc Marine. Later in the game you can upgrade your basic units to Space Orc Snipers, Space Orc Flamethrower and Space Orc Rockethunters.

The target of the game is to destroy the other Players. In the middle of the map is a main zone which calls the center. If you controlled three zones you can take it. (In next versions the player who controlled the center get a bonus for the time he has the position.

You can take new zones with your Space Orc Engineer. You must only take him and go to the middle of a zone to get an new bunker.

Special Credits and thanks go to:
Angelusz (for the nice starcraft zone control maps)
General Frank (for the very very nice Orc Models)
shamanyouranus (for his nice foundry Model)
Pyramidhe@d (for his nice Model)
The_Silent and Zombie (for their nice icons)

-Other
[ ] Bonus for taking the center


I had more ideas but i nead ideas from you too to make this map better! Please test it and give feedback what to make better or what wrong or what be good!

Changelog 1.3 (for screenshots see my reply post below of this thread)
Hi everybody...i changed many things in this version. First i redesigned the game map. You will see there are only the zones from the old version. Everything is new. I added Doodads and created new start zones and changed the textures of the map. I think it will be good. But i will hear what you think

I added a new unit who calls the Arrrgh Tank. It should give your army a little more power until the Space Orc Biggest Warmachine and Space Orc Flying Deeeath will come in later versions.

New is that you cant upgrade your Troops to another class like sniper or so on. You must research this unit types at your "Troop Center". After that they will spawn every 15 seconds at your bunkers.

Rockethunter have splash damage, snipers the critical hit ability and flamethrowers will burn more enemys at the same time.

The center has no feature at the moment. Will come in later versions.

Please give some feedback , suggestions, critic or ideas.

PS: I added a simple ki for testing the map without human players. You should play with maximum 4 cpu enemies because of lagging.