This bundle is marked as useful / simple. Simplicity is bliss, low effort and/or may contain minor bugs.
View usage Statistics Legacy download
Reactions: Spet
This is Shadow Wars 2 Test Version.
For more information about the game, check out the original Shadow Wars.

New Stuff
- Added a third base, Ruined Ship, to the southeast.
- For the new base, included a weak village, medium village, strong village, and lumber mill.
- Up to 3 players can now play.

Changes
- Skeletal Mage's Fel Fire ability now doesn't cost mana, but has a 4 second cooldown.
- Burning Zombies now have slightly more health and damage.
- Assassin's now have the Slow Poison ability.
- Increased the casting range of Web Spinner's Web ability, and made it autocast by default.
- Redid scoreboard and dominance triggers in JASS, making them smoother and more efficient.
- Dominances now give less/more score based on their difficulty level. For example, Research Dominance I gives only 1 score while Research Dominance III gives 3 score.
- When a player earns a dominance, it also says how much +score they get as well.

After some speculation, it doesn't seem like I will be able to reach my ideal 10 player count for this map, since I've already hit max map size. I'm expecting this map to be an 8 player map like the first one, unless I decide to make 2 players able to play as a human faction or such. Any thoughts on this would be appreciated!

These are all of the bugs I've run across, and will be happy to fix any additional ones found when reported!

Additionally, a lot of the game's triggers have been redone in JASS, and the result should be a much smoother game with less crashes.

Upgrade Chart Showing all the Combinations 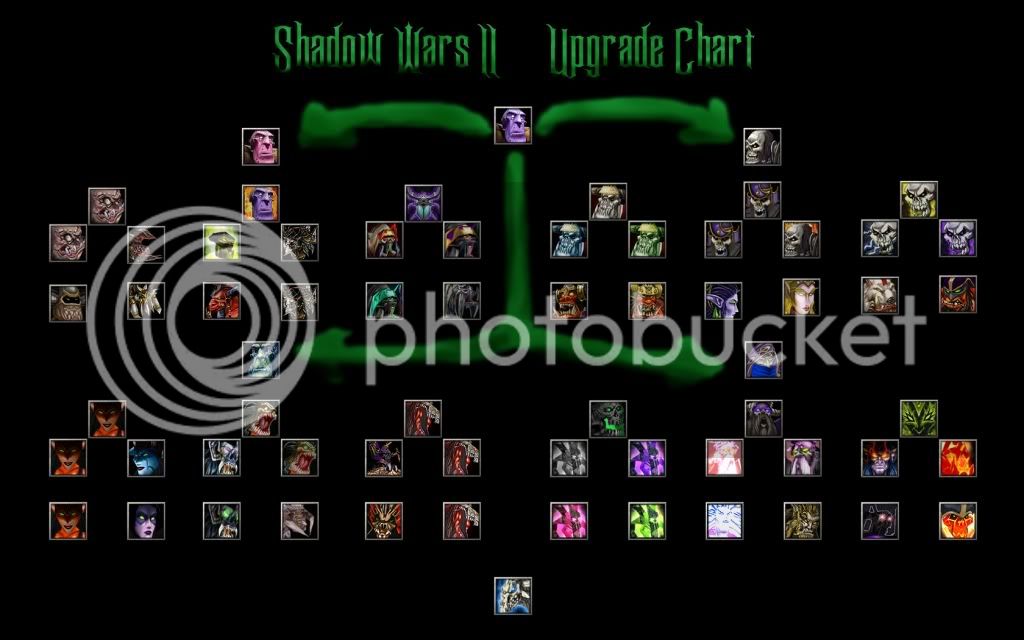 I'm posting this up for 3 reasons:
1. To appease anybody who wants to play it (I know there's at least a few out there)
2. To test the game for bugs since currently my free time is VERY limited.
3. To give people a chance to make it into the credits (anybody who's tried knows its hard).

Please keep in mind that an enormous chunk of the game map is still a work in progress, which is why this test version is so small (the map, not the file size). Due to the size of the map as it is, this is a 1v1 only version. The full version will be a 10 player game.

Anyhow, please tell me of any bug reports, suggestions, and all that fun stuff.
And as always, I will fix any bugs as quickly as I can!

Bug Fixes
- Fixed just about every bug I came across that involved heroes, including hero selection, getting gold, and higher lvl upgrades not being available due to hero level.
- Hero spells should all work correctly, this means Dark Conversion and Soul Preservation will benefit from upgrades, Heroes can now correctly learn base spells, etc.
- Food cap works correctly, now increasing with Hero level, as well as needing a Necropolis, Halls of the Dead, and Black Citadel to raise your Hero's level.
- Random Base selection works correctly now.
- Perks (both random and picked) should work properly as well.
- Heroes can now correctly pickup gold coins.
- All unlockable heroes should now be correctly selectable.

Test Ver.36a
I discovered the mighty power of JASS, and used my new found power to fix/optimize a few things.
- Converting Villagers, both Hero and Tower, should no longer have any bugs whatsoever. Or at least none of the bugs I knew about previously.
- Change about 20+ GUI triggers into JASS 2 triggers and 4 functions, fixing a ton of memory leaks, increasing game speed, fixing some bugs, and likely reducing the game's crash rate.

However, I did accidentally leave out the floating text "Villager Zombified!" but will add that later.

Test Ver.36
- Fixed a ton of bugs for Player 9 Gray, including a food bug, a level research bug, and dominance bugs.
- Return of the Shadow War's theme music! With the increase of the battle.net map size limit, people can once again complain about the music.
- Fixed hero selection so players should now be able to select heroes other than the initial hero if they have enough points.
- Fixed some spells with the Dark Ranger that you wouldn't know had problems because you couldn't play as her.

(Game Customization)
- The No Fight timer will now always be 60 seconds, and no longer changeable.
- Starting Tech has been removed.
- New Selectable Option: Perks - Advantages you can pick at the start of the game.

(Environment)
- Patched a few holes where units should not be able to go
- Weather effects have been reduced.
- Weather intensity will now change very little, but more frequently. This should give the weather a smoother, more realistic feel.
- Changed the terrain near the conversion towers rally points to reduce zombie clogging
- All units (including Dark Tech units) will be affected by the weather now


Shadow Wars 2 v.33 Changelog
(Game Mechanics)
- Weather will now change based on a weather-intensity system
- All units (with the exception of Dark tech units) will be slowed from weather
- Higher intensity weather will increase the amount slowed
- Players should no longer teleport to one base but claim another with random bases enabled.


Shadow Wars 2 v.32 Changelog
(Game Mechanics)
- Added information about the Northwood Company in the quest log.
- Hero selections will now come to an end when the timer expires.
- The message "You have 5 minutes to choose a base" will no longer show with random bases enabled.

(Game Customization)
- Heroes that require points should now be selectable.
- Players should no longer teleport to a random spot with random bases enabled.

(Game Customization)
- Players can now see more info about the heroes at the start when selecting, and hopefully this will discourage noobs from freaking out about people having heroes they don't have. The info shows what that particular hero's strengths, weaknesses, and their spells.

(Humans)
- Removed Militia from medium-sized villages (ones you get Conversion Towers from)
- Rearranged the forces in the heavier human base, hopefully giving attacks on the base a better pace and a more spread difficulty.

(Game Mechanics)
O Up to 10 players are allowed now.
- When a player leaves, most its units will now be given to its allies.
O During the tutorial, players will now be automatically kicked from the game if they press escape too many times.

(Game Customization)
O Instead of all the players starting out in the same spot (when auto bases is disabled) there will be way gates that allow a max of 2 players to teleport to a general direction.

(Heroes)
- Heroes now carry gold in their inventory; which is used for transactions with the Northwood company. Gold can be found off of creeps.

(Structures)
O New Base - Slaughterhouse, which gives the Wrath base spell.
- Changed the Cathedral base to Temple of the Damned.
- Bases will now start with 2 Ziggurats that can be upgraded into Shadow Towers.
- Changed the model for most of the bases to lower confusion amongst noobs.
- Haunted Gold Mines can now be acquired, and will give a steady +1 soul per second.

(Humans)
- Arcane Towers are now called Arcane Assimilators
- New Arcane Towers are now structures that have a large line of sight, regenerate mana of friendly units, and cast chain lightning at enemy units.
- Adding small human patrols that will roam around the map. To stop these patrols, kill the camps that are making them.
- Human bases will now have heroes guarding them as well as normal troops.
- Reduced the armor and health of the Captain, but gave him the Smite spell.
- Added Spell Breakers.
- Added Mages, medium ranged spell casters.

(Neutrals)
- Adding creep camps around the map that will be weaker than most of the human encampments so that heroes can level up easier.

(Northwood Company)
- Added a neutral faction called the Northwood Company. Players can befriend this faction or take from them by force.
- Lumber Mill site purchases now cost 25 gold and will award the player with all the units at the site (Lumber Mill, Guard Tower, Peasant x2, Bouncer x2, Overseer)

OOOOO a shadow wars 2! ima big fan of your work and thus far almost got 250 points for the overlord(which i cant wait to see) so im curouis to ask will points be allowed to be carried over??

baboolaba said:
OOOOO a shadow wars 2! ima big fan of your work and thus far almost got 250 points for the overlord(which i cant wait to see) so im curouis to ask will points be allowed to be carried over??
Click to expand...

Yes point will be carried over, it would be such a shame for them to go to waste!

I think you should remove the snowing, or reduce it, really hard to see.

Skins 3
gong123 congrats...spamer u might get banned ya know xD lol

3. To give people a chance to make it into the credits (anybody who's tried knows its hard).
Click to expand...

Which Is the exact reason Im in AkAS : Un1t3D_D4RkNeSs
Also, update your unlockable heroes, you didnt include the dark ranger.
Last edited: Feb 24, 2009

Wow I played shadow wars for the first time today, extremely fun. Cant wait for a full version of shadow wars 2 to come out with all the player bases and stuff put in. Great work, keep at it.

A couple of cons, though...

= The arcane base is almost entirely useless... Yes it might be a good location to regenerate your mana, but it's in the corners of the map, also, it does not use the chain lightning spell out of itself. I suggest you move this outpost to the center of the map, it would be much more useful there...

= Gold doesn't have a lot of uses, yes, you can buy an outpost with it, but that's really all...

= Gold is hard to get, I suggest you make the creeps respawn and make humans drop small coins as well, if you increase what you can do with gold... I suggest maybe some outpost where you can scout any location on the map? (goblin observatory-like) Units you can hire? Items you can buy?

In all honesty I didn't really work too much on Player 9 Gray. In the original Shadow Wars, Gray was a human faction, and thus most triggers weren't designed to work with that player. Don't be surprised if lots of things go wrong while playing Gray.

The map was intended to be a 10 player game, with the map being much bigger, but as I said above, I pretty much stopped working on this game.

Northwood Company was to have a lot more opportunities to spend and earn the gold, also including a reputation system, but I never got around to completing the map.

The Arcane Tower was to serve as an observation structure, revealing a portion of map with its line of sight, but I didn't see much point of worrying about that until later in the game creation stages.

I recommend playing the original version (Shadow Wars v1.4). There's somewhat less quality in that version, but its much more playable.

EDIT:
In this newer version v.36, the food bug, the level bug, and all the dominance bugs (there were a ton) for Player 9 Gray should now be fixed.

It's a great game and nice systems

omg i got to play this game with you names shadowdonavan in wc3! i luv this game keep up the good work!

Maps 1
Havent really been looking at the progress since Shadow Wars 1.4 but as soon as I saw this on main page of hiveworkshop I decided to play again.
The additions are great but you should add A command to disable weather since it causes lag

Please add to your description, so I can properly review this.
IT's long now, but it just gives almost no info into the gameplay.,
You must log in or register to reply here.