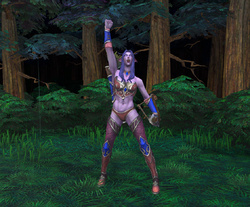 An experiment with the new models from Warcraft III Reforged, this skin changes the Night Elf Archer to remove her cape, pauldrons and loincloth, as well as changes the bottom garment that was under the loincloth to something that better matches the top piece.

This model could work well for an archer that was captured and had her equipment taken but managed to escape and find a bow, or a Night Elf citizen who has taken up a bow to defend her home. It could also work for a stealthy infiltrator who would be hindered by additional armor and an unnecessary cape/cloak.


I originally only intended to remove parts to see if it was possible, but was dissatisfied with the simplistic piece of clothing under the loincloth. I figured I'd quickly replace it, but once I got started I couldn't help but try to make it look somewhat good.

It could still use more detailing and embellishment to match the other parts of her clothing, but it turned out better than I expected!

- Be aware, this removed most of the parts that showed Team Color, so it's much harder to tell her color at a glance. I experimented with adding Team Color to the upper part of her leg-wear, but wasn't satisfied enough with the result. Let me know if you have any ideas!

- I tried creating a simple normal map for the skin, but it doesn't seem to work in Reforged properly. However, the change made is so small and hard to notice that it's likely not worth the file size necessary to include it in a map anyway.
The closest I've gotten to it working properly involved inverting the B channel and reducing the R and G channels to 66% opacity, but it still isn't quite right and you can see seams. A thank you to @Antinous for his post here which, while mostly not new information to me, inspired me to experiment with the color channels more.

It is also possible the problem stems from extracting the normal map DDS with CASCView, if it somehow mishandled the export, but that is entirely speculation.

- If you don't want to remove the cape and pauldrons, don't use the pauldron diffuse texture. Using only the main diffuse and main orm textures will remove the loincloth and change the outfit bottom without affecting the pauldrons or cape. (The alpha channel of the diffuse maps is what is being used to make parts invisible.)

Enjoy! It isn't much, but it's only the second model reskin on here for Reforged so I figured it could still be useful. Feel free to modify it or use it however you like; I'd appreciate credit if you use my work but that's all. Happy mapping!