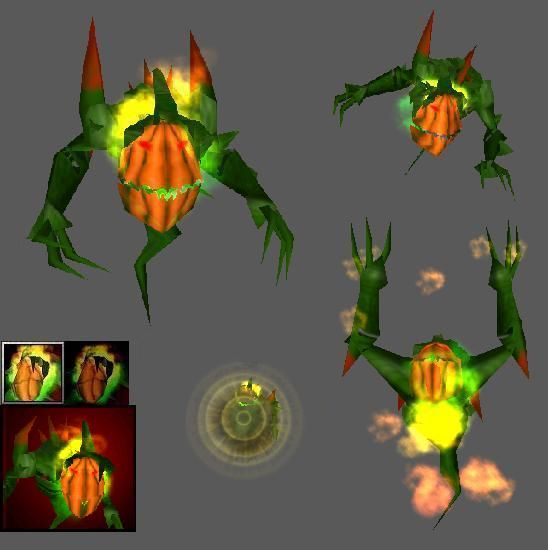 This bundle is marked as approved. It works and satisfies the submission rules.
View usage Statistics Legacy download
Reactions: LazZ and Avator
Ok, so the last upload was... unsuccessfull. For some reason the updates I made didn't come up... I don't get it cause I did update it but apparently only the screenshot changed. So here I go again along with the changes, I hope.

Again take notice to the attack anim.
The attack animation is rather slow so this model fits best as a "long range siege weaponary". I recommend the following settings to the unit in WE:

You don't have to follow these settings but it will help to make the unit work better in game.
Enjoy! Give credits if you use it and please don't edit.

Reviews
18:24, 27th Oct 2008 Pyritie: Changes made since previous version, so this gets approved.
Read full review...

Good...
Halloween is getting near...

Well this seems to be the perfect time of year for this! Good job 5/5 +rep

The timing for this model is perfect (and it looks good to)
but i think the eyes looks kinda weird. Maybye you should make like they was cut out like a normal hallowen lantern
But still AWSOME!
8/10 +Rep

woxx said:
The timing for this model is perfect (and it looks good to)
but i think the eyes looks kinda weird. Maybye you should make like they was cut out like a normal hallowen lantern
Click to expand...

As I have told others before. The eyes are a part of the same geoset as the other team colored parts. If I remove the eyes I remove all the TC. And I can't remove parts of a geoset, only the entire thing. But if I learn how I will do it.

I think that +rep was a

Thrikodius said:
I think that +rep was a View attachment 41067
Click to expand...

Why? You dont want to get rep?

Spells 14
Nice!
You must log in or register to reply here.