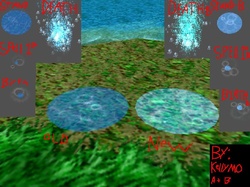 Another model of mine, something simple yet somehow super lacking in war craft 3 maps.

iv seen a lot, and I mean A LOT, of items (water puddle, bucket of water, ect) using the Abilities\Spells\NightElf\MoonWell\MoonWellTarget.mdl model.

this Item+Ward Combo is based off of Abilities\Spells\NightElf\MoonWell\MoonWellTarget.mdl with added vertex's making it a lot more round in shape. added a collision sphere so it can be targeted with right click, and vertex extents making it capable of being targeted by left click. a portrait camera so it doesn't look glitchy in the portrait window, positioned it so it fits perfectly inside the selection circle as an item. then animated it a bit more to make it a worthy ''ward''.


the difference between spell first and birth, is birth is instant like an items birth should be, but puddles don't grow instantly, so spell first is the birth animation slowed down by 100 fold. to use this, would require triggering, or unit data of some kind. Spell first is only useful to those making it into a unit-ward.

I know its kinda simple, but comparing the original Abilities\Spells\NightElf\MoonWell\MoonWellTarget.mdl and this model in game makes it worth the 6 kb file size if you need a map with drinkable single charge puddle runes. or simply like the looks of it confining to the terrain hence a doodad, without spamming terrain with shallow water. perhaps you want water to come and go in game during rain storms ect, or like the idea of destructible water formations using some splashy water effect on there point as heroes stomp over them.

if people want me to add built-in water splash effect, let me know and Il update it. it is kind of simple as it is. so I could do that if people cared enough.

---UPDATE 1--- inspired by ''sPy's'' ''WaterBullet'' I imitated his particle emitters by visually studying them in MAGO's and then toned them down in my model, the item now has a decent ''Death'' Animation art effect. I did not steal his model, I just kinda looked at it briefly.

---UPDATE 2--- had broken it by accidently deleting a key frame causing birth to play over and over instead of stand.


---UPDATE 3--- fixed the emitter making soft white rings so now it will not play for all eternity after the item is destroyed or plays ''death'' animation. no longer plays during birth or spell first either. just during stand and death.

---UPDATE 4, ALMOST 3/4 OF A YEAR LATER--- I re-centered the model better so it fits better inside selection circles, and added as the portrait file, another version. it was too small of an edit to upload as a new model, because i only re colored 1 emitter a tiny bit and changed a layer to additive instead of blend, and made it un shaded, adding a brighter look. more suited to sunken ruins maps like mine. this update is not critical but I felt like making it now any way.