Maps 2
So I found my abandoned 4 years old map based on the idea of combining aspects of Warcraft 1, 2 and 3 into an ultimate hybrid with some of my own neat concepts such as Captureable Structures, Dynamic Naval Combat, and Bleeding in a WC2-esque themed era.

It had the idea of adding sub-factions into the two main races, Orcs and Humans. The sub-factions followed a basic formula.

- Re-skins and stat changes of basic units such as Grunts and Footmen
- 3 new units that represents the sub-faction's specialization (Siege, magic, turtling, naval forces, etc)
- Has traits and bonuses that make them differ from the default faction

I've decided to continue my map since I really like the idea of it. Pretty sure the only reason I abandoned it was because I didn't really have any ideas for the factions.

Anyways, I would really appreciate some help if any of you Hivers out there give interesting faction ideas for the Humans and Orcs that followed the above formula, with your own twist if you want.

Models 3 Maps 1
Give each faction improved/cheaper versions of their specialized units (siege, casters/spells, tanks, etc) and a unique unit.

Kul Tiras could have ships with better range and spells that allow coastal bombardment. Unique unit is amphibious and has anti-ship abilities.
Dalaran could have more efficient casters (for example, Heal restores 35 instead of 25, Slow lasts longer). Unique unit increases allied mana regen.

Icons 2
Oh, I had a similar idea once, though in my case it was more of "build your own Horde/Alliance/Scourge"
So basically, what I remember, feel free to use.

Horde:
Stonemaul - siege. All units are effective at smashing buildings, also one can bullrush into the middle of enemy base and summon beasts there.
Burning Blade - assassination. Decent but lightly armoured units that can pop "Burning Blade" ability giving them massive bonus to damage for a short time and burning enemies over time for percentage of maximum health, so they can take down even fat units. Also mirror image or shadowmeld, don't remember.

there was more but I need to find my notes

Alterac - Specialists in ambush and discretion, rogues and stuff like that. Can maybe rob gold.

One faction should have siege weapons.

Maps 2
Thanks for the faction ideas, guys. I wanted to put Blackrock and Lordaeron to the subfactions but then I realized that they're already a part of the main factions so that's a nah.

Horde - Default WC2 Techtree of Orcs
Subfactions:
- Warsong: (Stromgarde equivalent I guess? Still need ideas.)
- Stormreaver: (Dalaran equivalent, but with Orcs!)
- ???: (Kul Tiras equivalent, the whole naval warfare kind of thing, but it can be something else to give some unique flair)

Yeah, as you can see the Orcs are kinda the only thing lacking. I'm sketching out a tech-tree of the Alliance sub-factions right now, but I have a pretty clear idea for them. If you guys have any more ideas about the Horde side then feel free to speak up. It'll also be nice if you guys came up with more stuff other than faction ideas, like systems, statistic changes, gameplay mechanics and so on.

Also Frostwolves are outta the picture since they're kinda against the whole 'Invade the Humans' thing even though I would've loved to add them to the map.
;~: RIP, Frostwolves

Bonechewer: Cannibalism and corpse use. Unique unit powers itself up by using allied bodies.

Icons 2
You could replace Stormreaver as main magic clan with Shadowmoon, Twilight's Hammer or Shadow Council, and make Stormreaver the main naval clan, but focused on magic rather than just good ships. I.e. where Kul Tiras would deploy a couple battleships, Stormreaver would deploy a boat with a storm warlock on board, calling down monsoons and tsunamis.

Alternatively, you can make Darkspear the naval faction (even if set during Warcraft II the Horde could still conceivably find and annex them), pitting a bunch of light boats and batriders against Kul Tiran heavy warships. In that case, Unstable Concoction could be common ability to them all.

Alternatively alternatively, Goblins. Giant turtles, submarines, bomb-dropping zeppelins that can, I dunno, latch onto enemy ships to keep bombing them as they move, I guess, watertight shredders that wade through water and saw enemy ships' hulls open, that sort of things.

Skins 7 Reforged HD Skins 1
ALLIANCE
* Stormwind - Mostly have footmen with higher hitpoint and with defend of course. The uniqueness of the subfaction is having advanced mechanical units like airship/gunship and siege weapons (advanced royal catapult.)
* Kultiras - Medium footmen but can submerge in water, additional and unique naval ships, and have naval cannons as unique siege weapons.
* Gilneas - Give them all a morph ability that turns them into wolves or worgen which gives them increased sight radius at night with life regeneration plus... the worgen mode has lower hitpoints but higher attack speed and additional dice damage.
* Alterac - Have less 50% cheaper costs when hiring mercenaries and ambush system (give an ability you can use with some of your units that rallies 5-10 units to that caster unit.)
* Dalaran - Well weaker infantry but stronger and more effective spellcasters.

HORDE
* Shadowmoon Clan - Weaker infantry and most units are weaker than a standard orc type. But has allied with demon units.
* Warsong Clan - Have unique units like worgs and special abilities like Wolf Roar like Roar, berserk, and kodo beast drummers have better ability with large radius of aura.
* Blackrock Clan - mostly have additional siege weapons, units have more armor, but more expensive than normal.

About Gilneas, the worgen ability comes later... After or during WC3. It does not fit here.

There is also the Bleeding Hollow clan for Blademasters.

Maps 2
At first I didn't have any ideas on what to do with the other factions, but you guys just filled my brain with them. It's just not possible for me to use all of them.

Now due to obvious reasons, I will limit the amount of playable sub-factions to only 3 for the two races. So here are the top contenders!

ALLIANCE
* Stormwind (Versatile Faction) - Effective in most situations due to their cheap and hastily-trained military forces, but has mediocre siege and naval capabilities. Their Tier 3 units such as Paladins and Knights are better while Mages are replaced in favor of Clerics that can heal, kinda based on Tuwnew's Lordaeron faction.
^ Unique Special Unit: Commander (Heroic unit that can give stat buffs to allied units)

* Dalaran (Magic Faction) - Self-explanatory, spellcasters such as Mages are stronger and can be built at Tier 2, but military unit are generally weaker. Structures are also much more durable and they can get arcane empowered Battlemages instead of Paladins.
^ Unique Special Unit: Mana Wagon (Regenerates mana of nearby units)

HORDE
* Warsong (Offensive Raider Faction) - Based on Trill's idea about a faction with fast and powerful Raiders instead of Ogres and a tough Warlord unit to replace the Ogre Magi. The units are expensive, but all military units have Pillage, and debuff enemy units when they die. Kinda OP, but I'd rather finish the factions first, balance them later.
^ Unique Special Unit: Goblin Airship (Basically a Kirov from Red Alert, cuz why not)

* Stormreaver (Naval Magic Faction) - I wanted to just make it a simple Naval faction, but I thought it would be better if the Orc sub-factions aren't just copies of their Human counterparts. I don't have any ideas for these guys yet so, feel free to say something.
^ Unique Special Unit: ??? (Any ideas will be appreciated)

* Pending Faction (Something something faction) - Yeah... The Orc side is really lacking in ideas, which is funny because the main Orc race is the only one that is at least 90% complete. The main Human race is still being worked on, but will probably be complete by tomorrow so I can finally start doing the fun bits.

I know you guys enjoy brainstorming, so help me out on ideas for the Stormreaver Clan and the third Orc sub-faction.

Also, screenshots of the nearly completed Orc race! The stuff there isn't final by the way. I'm just proving that I am actually working on something and not just being a lazy bum. Also, I couldn't find a good Goblin Siege Turtle model so I replaced it with a Goblin Submarine instead. 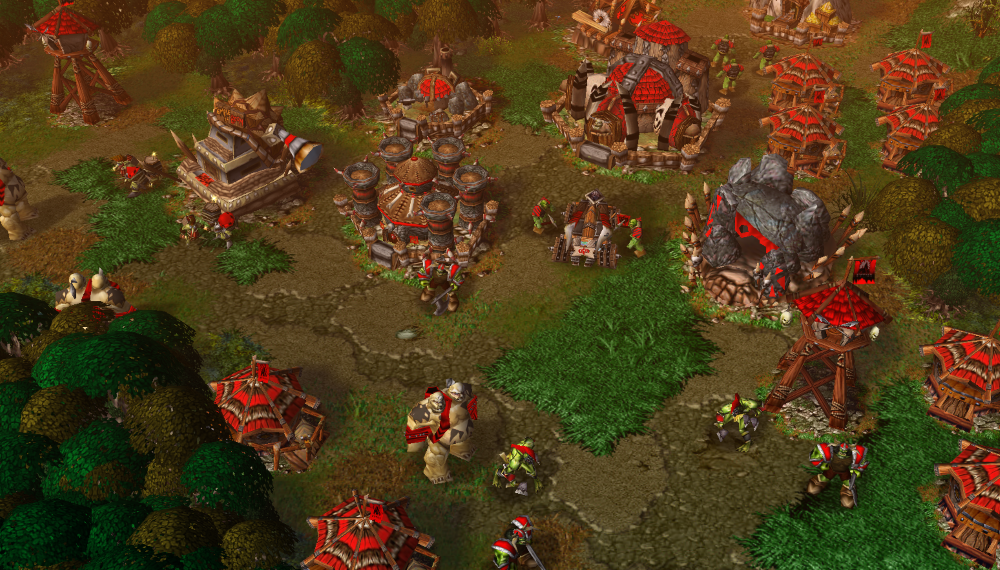 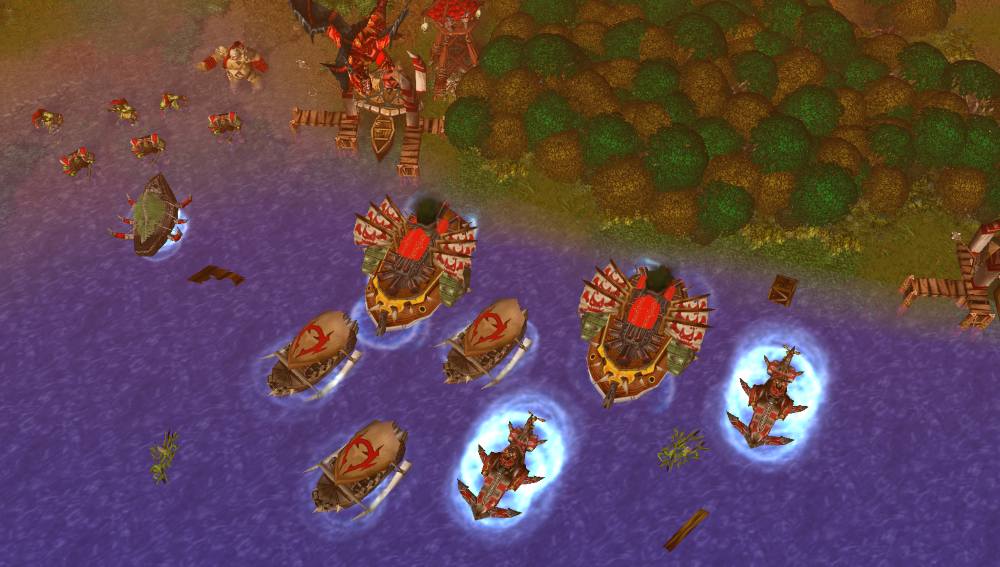 Models 3 Maps 1
Stormreaver: Someone mentioned a naval caster (storms and such). Maybe some demonic units on loan from the Legion.
* Spell idea: raises rocks from the seafloor that damage ships and remain on the surface as obstacles until killed.

Basically divide each faction into subfactions, with each one either specializing their units in some particular form of combat OR each one gaining a unit specifically designed for that form of combat (unit could be a hero if you like)

Here are some ideas:

A faction can be really tanky; it will have heavier units; units like Knights, Footman, & others will either start off with more hp, have upgrades that grant them more hp, or be replaced by similar or re-skinned units with more hp

A faction can be devoted to steath; its units will come with abilities like hide and it can have access to a specialized unit that stays invisible at all times

A different faction can focus on air combat; with it either gaining a new air unit, or the already existing air units having more damaging attacks, extra abilities, more hp, or other things

A faction can focus on mass production; reduce the food cost of Footman to 1 (not too great of an idea -but i have seen it done)

A faction focus on spellcasters, with the faction's spellcasters having more mana and an extra spell, or with a brand new unit accessible

you get the general idea
You must log in or register to reply here.

Idea for an ORPG