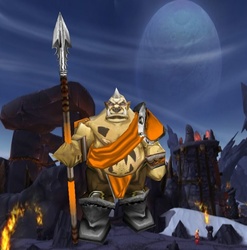 Draenor Ogre. Enjoy. i will update it later. But I decided I will release it now, because it finally has portrait.

It has one portrait, but two sets of animations. If you want him to use lance use alternate animations. So its basicly two units in one model.

Updated. Those Emmiters was not supposed to be in there. I will make some version with new ones. Or perhaps only make emmiters on mage versions. Thanks for pointing it out.

Updated again - the clipping should be fixed on the shoulder.
- Fixed the spear in decay anim.