Northrend: King of the Damned Beta6 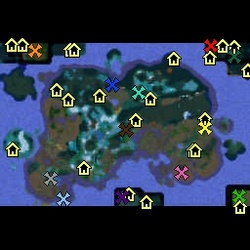 Okay, this map has been in the works for way too long. I feel like I've been very thorough and that I have done a strategy map very different from other strategy maps.

The Neutral Factions (Start out neutral to everyone but the Scourge, but after a timer has expired go to war with everyone except eachother):
The Argent Crusade
Dalaran

The Horde:
The Warsong Offensive
Taunka & Tuskarr
The Forsaken


This is why I am certain of that battles will center around the resource convoys, because why would it not? Resources draw any player to them.

-The tower system-
The tower system is simple. You can ofcourse build your own towers, but they are not a case in the tower system.
There are several towers placed around the map, creep owned, and if you kill one, you can choose to either
a) Pillage and loot it, you get a random ammount of gold between 50 - 200. That's not much (in this map atleast), but it can cripple an opponent's defense.
b) Build a new tower out of the ruins of this one. You get to choose between three towers.
Tower number one: The Offensive Tower, more damage, less hp.
Tower number two: The Defensive Tower, less damage, more hp.
Tower number three: The Observation Tower, low damage and hp, but you get a large radius of sight, that scouts for enemy movement. This tower can serve to be cruicial in planning your attacks.

-Naval income-
This is pretty simple. Think World War One - Road To War. You get a timed income from the sea.

--Balance Fixes--
-Increased Forsaken Soldier hp from 480 to 520
-Buffed pink slightly
-Reduced some of yellow's starting units
-Reduced some of brown's starting units in the Howling Fjord
-Added more starting units and a barracks for gray in the Borean Tundra.
-Added a secondary attack to ships that only targets ground.
-Added more starting units for green in Borean Tundra.
-Added a limit to air units due to a mass of them turned out immensively powerful.
-Removed Gargoyle's ground attack since as a cheap unit and massable it was too powerful against factions that had less powerful anti air or none at all (Valiance Expedition as an example)
-Nerfed Liches, more specifically their Frost Nova.

--Additions--
-Added a quest menu
-Added a new feature where brown can regain the lower parts of Wintergarde by destroying a certain building (this gives him a town hall, two barrackses, a few farms and three Guard Towers
-Added two extra weapon and armor upgrades.
-Added a new air unit for Valiance Expedition called ''Skyhunter'' It's like a Gargoyle with melee anti air attack.
-Added a Boulder Tower upgrade for Watch Towers and a Siege Tower upgrade for Ziggurats. They're just as powerful as a Cannon Tower.

----Hotfix changelog----
-Fixed the invulnerable plague catapults
-Fixed the untrainable Skyhunters for the Valiance Expedition
-Fixed the upgrade issues some factions encountered
-Fixed the bug when upgrading Barrage where the Battle Tanks turned into Siege Engines upon being upgraded.
-Rebalanced the fight between The Cult of the Damned and Eastern Valiance Expedition by buffing Wintergarde signifigantly.
-Made Ghouls more durable for Dark Green due to having a complete lack of a proper melee unit.
-Added Plague Spreaders for Dark Green, for some reason they were not trainable before.
-Nerfed Heigan the Unclean's AoE heal.
-Increased the cooldown for Necromancers' Raise Dead, because DG could raise an army in a matter of seconds.
-Made the last levels of caster upgrades upgradeable, was a techtree error.
-Added Banshees to the Forsaken's caster techtree, for some reason they were not trainable before.