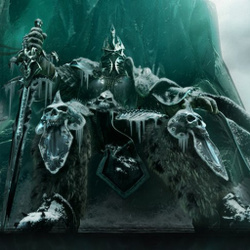 Basicly, the map is based on a map called "AoS Three Kingdoms" which had a lot of success some years ago. It's an AoS where three different teams (North, West and East) fight each-other. The game's objective is simple: destroying the enemies' castles. As in any other AoS, you just pick a hero and start fighting!

To sum, Northrend Battles is just an AoS-map!

- a lot of custom spells (actually, in average, each hero has at least 2 spells made by my-self)
- 26 heroes (more will come)
- 64 items (each team hast 6 stores. There are also three neutral stores)
- Bounty-system (killing and destroying increases your bounty, that will be given to the hero killing you)
- crafted items