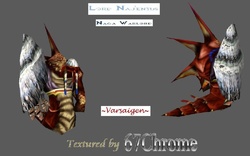 Lord Naj'entus rises from the depthes. His fellow Warlords awaken, leading their legions unto the surface world. The Naga, the tide at their backs, storm the beaches of Kalimdor and Lordaeron, forcing all who oppose them to submit or flee to higher ground. The final days as the Dark Tide washed over the world.... The Dawn of the Naga Empire had begun...

Do not edit or redistribute without my permission. Please give credits if you use this in your map.

Note to everyone else: Misha also has his own version of the model, and it looks more demonic

Edit: The Warlord has been put on a small diet by request of a few people who have seen the WoW comparison. Looks better now though

Edit: Thanks to Misha for helping fix the Geoset animation problem!

Now, thanks to him, the model doesn't crash anymore!

Moderator
17:10, 21st May 2009 Cavman: Good Idea. Poor execution. Theres a problem with the model taht causes it to crash maps. This is most probably a geoset animation problem, as this models seems to be mostly geoset merges and a reskin. You probably hace...
Read full review...
Reputation Statistics
Page 1 of 3
Show Ignored Content
Page 1 of 3