World Domination is a diplomatic sandbox game about nukes, zombies, and world conquering taking place in the 21st century. It features a unique system for custom airplane and missile movement, extensive options for diplomatic interaction between players, aswell as its own AI. It is currently in alpha development, but available as early demo below.

This map uses a custom resource system with flux economy, inspired by Supreme Commander. Resources are spent and gathered in real time, where draining your stockpile of a specific resource will cause your production to stall. The available resources are:


Tax income is gathered from your cities. Each city has a wealth value, which periodically increases from economic growth. The tax income is a percentage of this, ranging between 5-30%, which the player can adjust at any time. Low taxes will mean higher growth, while high taxes can result in negative growth, reducing the city¨'s wealth. Every time a city changes hands, its wealth is also reduced by 25%. 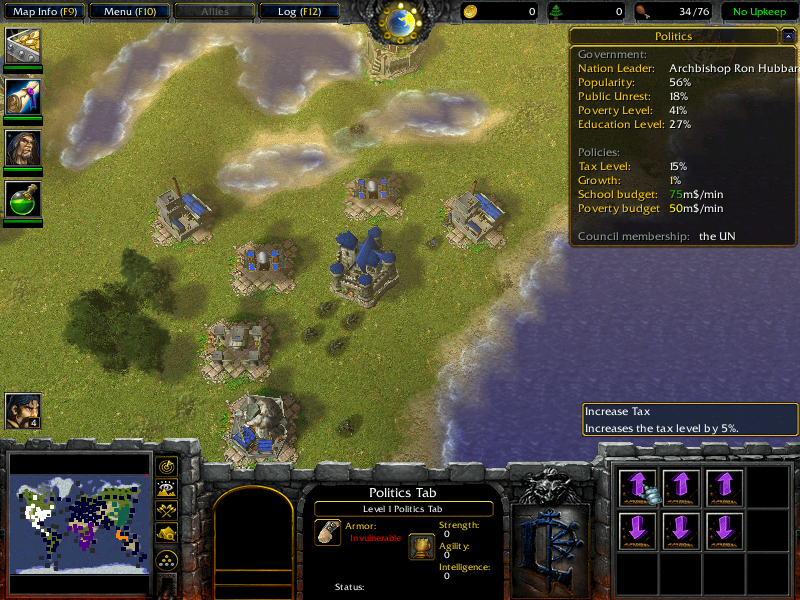 Players can sign trade contracts with eachother to trade resources for currency in real time. Since resources are spread unevenly across the map based on real-world mineral maps, some players will be forced to import or export certain resources. City wealth is also based on location, divided into first, second, and third world areas. Third world areas generally have lower town wealth but more natural resources, making them inclined to exporting these. It is also possible to trade researched technology through lease contracts. Signing a lease contract means the other player benefits from the tech for the duration of the contract, in exchange for constant payment. If the player fails to pay up, the technology will be disabled until he can afford to pay again. For instance, a player who has researched napalm bombs can lease the technology to someone else, allowing him to also use napalm bombs until the contract is broken. Apart from physical resoures, it is also possible to export your power surplus to other players. In these cases, the other player will only import the amount of power he needs, and only the power you can spare. This can be a good way to help a player who has just had his power production destroyed, but since it is possible to increase your power output through extensive research, it can also be a good strategy to let one player produce all the power for your whole alliance. Just watch out incase he decides to switch sides!

It is not possible to directly tribute currency to other players - however, it is possible to hand out loans. A player who has loaned from you will be forced to pay a periodical interest to you until the debt is repaid. If he fails to pay his interest, it will be added to his debt. A player can only loan from one player at a time, but it is possible offer loans to several other players. Having a large national debt is also a factor which may displease your population, so be careful of how much you loan. 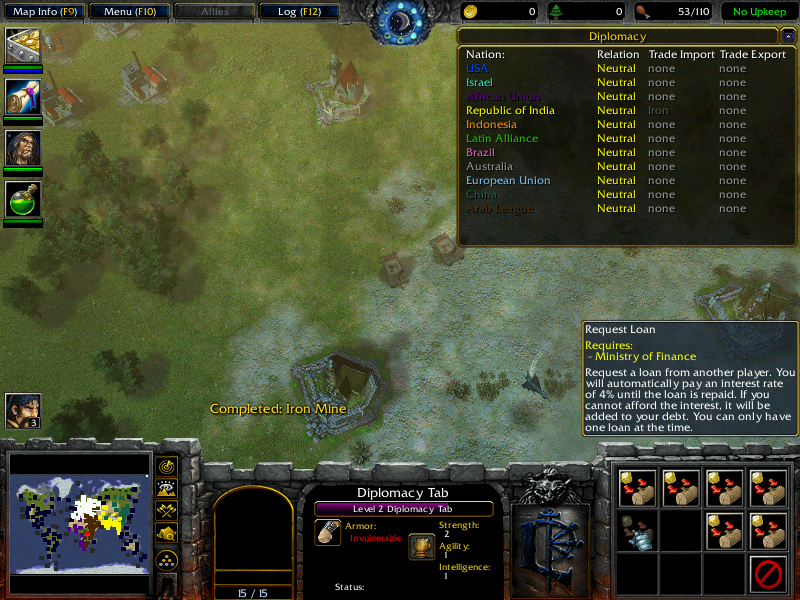 Diplomacy between players is primarily managed through a feature known as councils. Players who are members of a council can vote on important subjects, such as enforcing trade embargos, demanding a ceasefire, or ceasing a disputed city to another player. Any player can form a council, but you can only be a member of one council at a time. When a player submits a petition, the other members are asked to either approve or oppose the proposal. If a petition passes, the opposing players can chose to either accept the decision, or leave the council. At the start of the map, all players are members of the UN, but as new alliances form, it can be practical to have a council specifically for the members of your alliance. Enforcing policies, such as banning nukes or chemical weapons, is another practical use of this feature. 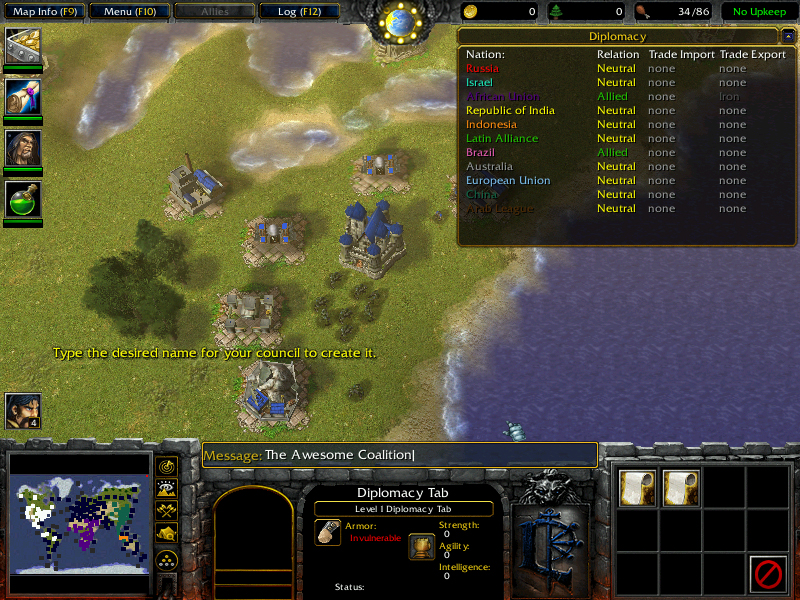 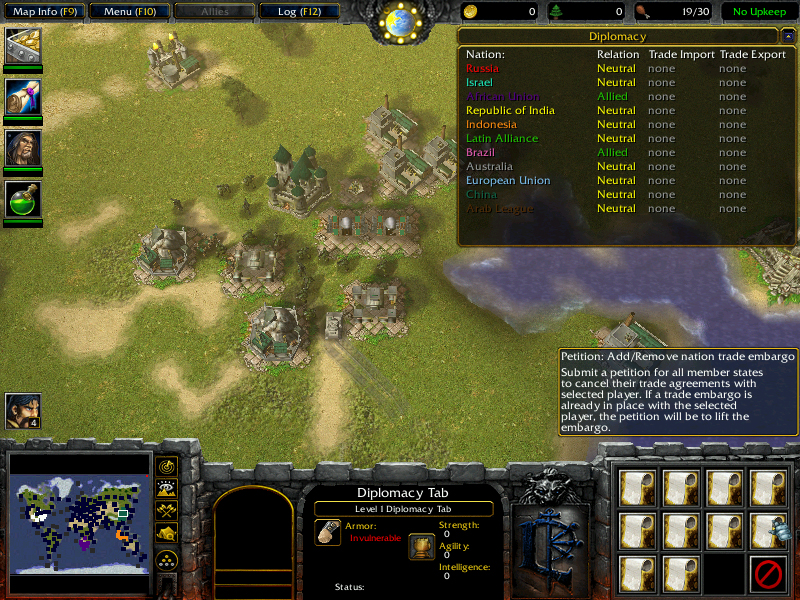 Players can manage their internal policies through the politics tab. Here, you can see statistics over your tax rate, your nations poverty and education level, as well as your public unrest, which is a measure of your peoples discontent with your rulership. High taxes or high poverty are some things which increases unrest, but also the use of unethical weapons such as nukes or gas, which can cause a temporary spike. If your unrest reaches critical level, it can cause strikes, riots, or even rebellion! 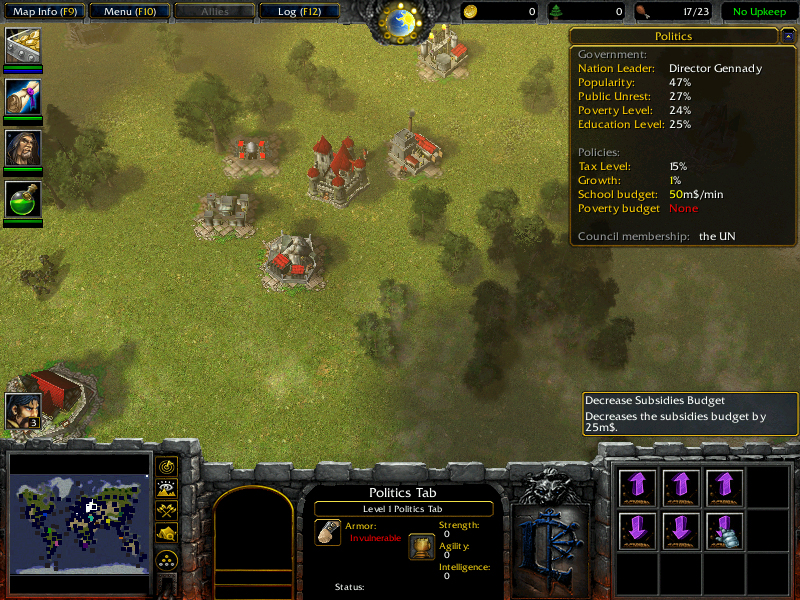 Poverty is based on your nations average wealth. You can also compensate for it by increasing or decreasing your subsidies budget, which will drain from your tax income. In a similar fashion, the education level influences your research speed, and can be controled by increasing or decreasing your school budget. If you divert a large portion of your tax to education, your research can be boosted by as much as 50%. Since research is otherwise very time consuming, it can be a viable strategy to niche yourself into researching and leasing technology to other players.

At the start of the game, each player will select a government type. The government types include communist, theocracy, free market, militarian, and plutocracy. Each has their own pros and cons, and endorse different playstyles. For instance, plutocracies are run by the owners of wealth and industry. They will benefit from increased resource production at the cost of higher unrest and poverty. Theocracies, however, have a more humble population, due to their trust in the divine right of the ruler, and they can also train suicide bombers. On the other hand, they suffer from slower research speed, due to scepticism of science. Militarian governments are ruled by a grand general, and have a martial approach on politics. They don't suffer from unrest penalties when using nuclear weapons, and they can train National Guard squads, which are cheap meat shields.

Unique research system
Research is conducted through a centralized system, where only one technology is researched at a time. However, any progress made when researching will be saved, even if you decide to swap to another project before the first one has completed. Research speed is also dynamic, and depends on your peoples education level and government bonuses. This means that your research speed depends on how much money you are willing to put into educating your population.

Espionage
A central feature in this map is the use of espionage and covert operations. Spies are invisible, and are produced at a structure known as the Intelligence HQ. They can be equipped with an array of items ranging from suitcase bombs, to viral canisters and portable radar devices. The items are produced at a cost from the Intelligence HQ. It is also possible to produce stealth bombers, which are great for reconnaissance or hit-and-run tactics.

Dynamic weather
Weather effects and natural disasters will randomly spawn across the map, to make the world as dynamic as possible. Tornados, storms and volcanos are some of the disasters which can wreak havoc for players.

Missiles
World Domination features a fully custom missile system used by some units such as MLRS rocket launches and Cruisers, but most specifically by the intercontinental ballistic missiles launched from the missile base. To protect yourself from enemy missiles, you can construct anti-ballistic laser turrets, which will attempt to shoot them down before they hit. Recon planes can also be equipped with these lasers, providing a more mobile missile defence. Nuclear missiles will irradiate the ground where they strike, damaging units in the area for a long duration of time. Players can reduce the damage taken from radiation by teching up their radiation shielding. 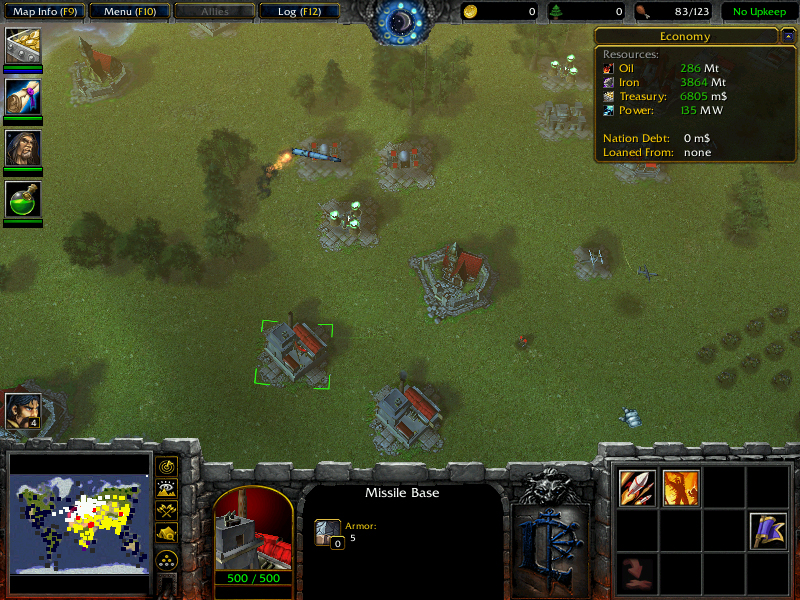 Airplanes
Airplanes in this map have all their motion simulated, even taking account of inertia, which makes for very realistic movement.

Zombie apocalypse
Players can choose to develop tactical viruses, which will be infecting and slowly killing any targets exposed. These can later be refined into disastrous zombie viruses. However, once a zombie outbreak has begun, it can quickly spiral out of control, and zombies exposed to radiation may mutate into even deadlier variants. "It seemed like such a great idea at the time..."

Nuclear Weapons
Nuclear weapons utilize a custom shockwave system, causing epic explosions where players looking directly into it will also be temporarily blinded. The blast will generate radiation, which will linger for a few minutes damaging nearby units. Players can research radiation shielding to protect their units from some of the damage, and it is also possible to produce dirty bombs, which generate the same amount of ratiation as a nuke, but with a smaller explosion and at a lower cost. Excessive use of nukes will eventually trigger a nuclear winter, causing global snowfall. Note that nuclear powerplants will also explode catastrophically when destroyed, unless "safe reactors" is researched, so make sure to place them outside of your base.

Nukes are the only weapon capable of ruining cities. If a city is ruined, it's wealth will be lost and it will not be able to produce units. Rebuilding a city is very expensive and time-consuming, and it will take time for it to fully recouperate.

Orbital Satellites
Upgrading a missile base into a space center allows you to produce satellites for espionage and combat use. Satellites are invulnerable, but are also connected to the space center they were built from - if it is destroyed, the satellite will crash into the ground, dealing damage to nearby units. Orbital laser satellites can channel a scorching death ray, incinerating any units in its path. 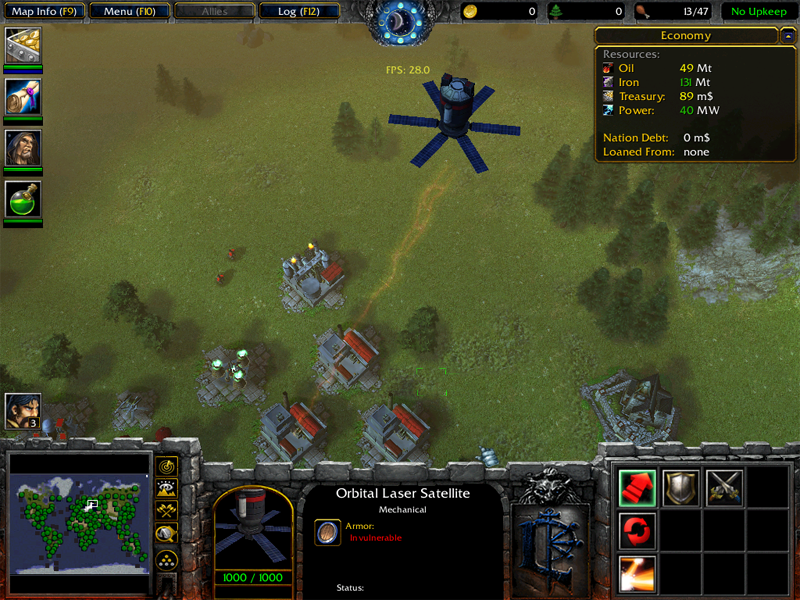 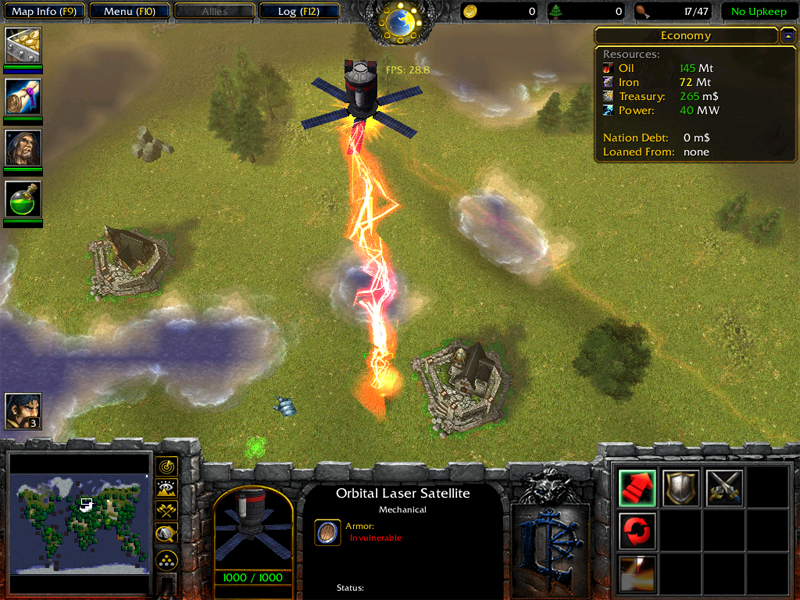 Aliens
It is rumored that UFOs have sometimes been spotted in the sky, roaming around, and even kidnapping soldiers for their experiments. Retrieving a wreckage from one such UFO could provide some invaluable insight to their technology - let's just hope their mothership won't come to revenge its fallen comrades...

AI
Fight alone or with friends against clever bots, who will send and evaluate requests, conduct research, manage their own taxes and policies, and even launch strategic missiles! Supports all three difficulties.
You must log in or register to reply here.