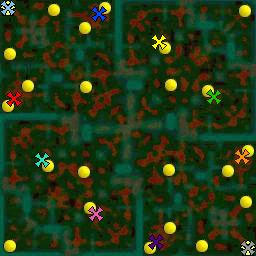 
Factions
Loyal for Rainbow has 14 Factions avaiable. New Faction will be added in future updates !


Credits
First and foremost, thanks to everyone in the community for always providing me with feedback and supporting the map. 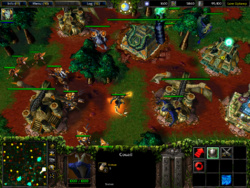 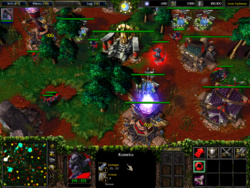 Alexen
ReviewLoyal for Rainbow Key ConceptAltered melee - You put some heroes with spells and names from DotA and put a normal Melee Map layout:pmeh:. GameplayBased on normal melee maps concept. You can choose from multiple races but all of them have...
Read full review...

WhiteFang
Well,you asked me to play this,so i did so First,before we get into my findings in the game,i'd recommend working on the description.I recommend a quick overview of mechanics,as this is quite a bit different from normal melee,a quick overview of each...
Read full review...

MN Lahmar
As requested this is my review: The general concept of the map is blurred. I would recommend working on a detailed description of the map and its mechanics and a quick overview of the races. You can include tips during the game ( When you type the...
Read full review...

How to get wood?

JinJang said:
How to get wood?
Click to expand...

some factions need to build resources building to get wood.

Daffa the Mage said:
Please provide a better description and some screenshots. Refer to approved maps for reference.

Models 1 Icons 2 Packs 1 Tools 2 Maps 20 Spells 31 Tutorials 4
If it's still early beta, I suggest you to use Map Development forum instead. Only late beta and completed maps are allowed in the Map Section.

Daffa the Mage said:
If it's still early beta, I suggest you to use Map Development forum instead. Only late beta and completed maps are allowed in the Map Section.
Click to expand...

aww sorry i will upload the non beta tomorow. Thankyou for remind me

Icons 29 Maps 2 Spells 1 Templates 1 Sounds 2 Tutorials 1
As for now, this one should be really improved in the Map Development section. Read the rules before uploading a map.

Maps 3 Spells 1
Well,you asked me to play this,so i did so

I want to start off by saying i like the variety of factions,and how each one has strengths and weaknesses,as well as a role and difficulty.It increases the replay-ability and makes the map more interesting

First issue i had was with the Crawling Chaos hero.His tooltip is not very descriptive,and his abilities are lacking,he is kind of pointless.He has 2 abilities,one of which is attribute bonus,which has no use since he can't attack

My second issue was with the Azalea Council building.It did not have a model,and was completely unselectable,rendering it useless.

Another more minor issue is the upgrade descriptions of the research-able upgrades.Some for example say they increase damage by 9,when they actually increased it by 3


The Orb of annihilation ability of the Drake Rider is called 0Annihilation in the tooltip.Very minor issue,but something i noticed

Overall,this map is still very heavy WIP,but its definitely interesting and has plenty of potential

Misc:
I think the creeps are too powerful,they kicked my ass very badly,even with plenty of forces and a hero

some more colors for words in the description of races

forgot the name of the faction i picked - it had black citadel; the dark purple color is a bad choice bcs it is hard to read

get a native english speaker to check the language

Maps 3 Spells 1
forgot to mention,if you have any questions or need any help,feel free to contact me.I'll do my best

Maps 3 Spells 1
so what did you change in this new version?

iam so sorry. I will update it again at night. And add more data change log


WhiteFang said:
so what did you change in this new version?
Click to expand...

Models 16 Icons 6 Skins 1 Maps 1 Reforged HD Skins 1
As requested this is my review:


This project has a lot of potential but it needs a lot of work.
Best of luck and if need any suggestions or help feel free to contact me.

Icons 29 Maps 2 Spells 1 Templates 1 Sounds 2 Tutorials 1
Also, please remove the Aeon of Strife tag since this map is not AoS or Moba.

NaserKingArthas said:
As requested this is my review:


This project has a lot of potential but it needs a lot of work.
Best of luck and if need any suggestions or help feel free to contact me.

iam really really sure on 30 seconds game. There is info to press F9.

It has mechichs. Rules. Tips. But if that lot info still not enough i will add more detail

And the creeps are weak already. I can kill tier 3 creep with 5 units and hero[/QUOTE]
You must log in or register to reply here.