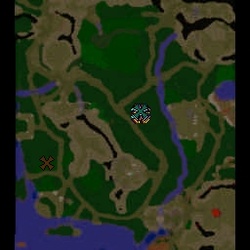 map edited by Comrade.Rat, original authors Dwarfwarlord, Meiscooldude and Christers.
Originally Revived, this version was reworked by me.

Lord of the Rings Builder Reborn 1.0
Balance Improvements:
-Massive attack spash radius greatly decreased (Large 150, down from 300/ Small 75, down from 150);
-Ent Hit Points, attack power and attack speed decreased (Ent hp 900, down from 1000, attack speed 5.0, up from 3.0, attack damage 80, down from 100. Ent Rockthrower hp 800, down from 900, attack speed 8.00, up from 6.00, attack damage 80, down from 100.);
-Mumakil arrow volley no longer stuns.
-Eastern Barbarian's Berserk abillity effectiveness decreased (attack speed +30%, down from +50%. Duration 6 sec, down from 12 sec. Damage taken decreased slightly.);
-Uruk-Hai crossbowman now price increase (now costs 75g, down from 16g.);
-Horn of the White Tower abillity power decreased (provides +30% attack power down from +60%);
-Fire Trap abillity improved (Radius increased to 500, up from 300)
-Balrog weakened (Hit points = 1600, down from 2000)
-Shelob stronger (attack power = 120, up from 100.)
Minor terrain changes:
-Added sewer at Helm's Deep. Improved it's walls.
-Moria expanded.
-Duneland surrounded by fences.
Gameplay:
-Added Travelling merchants that sell items to heroes.
-Shelob now drops an item (see what).
-Hostile Ents infront of eastern path to Fangorn removed.
-I was supposed to add Gandalf and Radagast heroes to be trained at Tavern, but I encountered a problem - they dont count as a hero and they can be trained both! Removed them until I solve the problem or somebody helps me by opening it and fix the problem.
Model fixing:
-decreased size of Mounted Horse Archer (0.90, down from 1.00)
-Legolas remain with Sylvanas model, sry, but Legolas custom model sometimes dissapears ingame.

Will be added later.

Moderator
00:36, 30th Jul 2010 ap0calypse: Rejected You have to redo the terrain and triggers. The gameplay is way too much like any other castle builder, apart from the LOTR theme there aren't any real features.
Read full review...
Reputation Statistics
Show Ignored Content