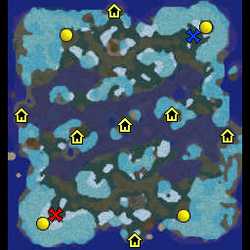 Update (26.08.20)
- added a green camp next to the base and changed some creeps
- since I did not mention the last couple of updates yet that happened over the last week, here's a list:

- changed the layout of the green camps in the middle
- changed all treelines on the map to minimize the amout of hiding spots for wisps
- changed the amount of gold in the expansion gold mines to 20k (similar to AZ)
- added some doodads and cliffs to make the map more visually appealing
​
Update (18.10.20)
- changed terrain in some places

mafe
Approved based on the results and reviews of the 6th melee mapping contest: Hive Cup 2020: Melee Mapping Contest #6 - Results Additional comments: -The only downside I see on this map is that it is lacking a unique selling point, instead there...
Read full review...
Reputation Statistics
Show Ignored Content