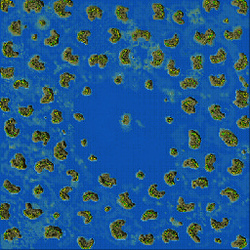 Short Description: Take over the islands, build ships, make upgrades, destroy others and get allied with who you want. On every island there are resource mines. Upgrade your buildings, defense towers and shipyards to survive attacks of others. Destroy shipyards to take control of any other island. In total there are 17 different units (12 ships, 2 submarines, 3 air-crafts) and 73 islands. Ships get more powerful with upgrades so basically it's the easiest way to win. Also every ship gets experience on his own that can give it extra power.

General Rules.
-When player lose control over all his islands he is defeated and will lose all ships he had.
-Ships can earn experience through battles to increase there power. Idea is simple: 1 kill - 1 exp. Each ship has 4 levels. Ship must sink 20 opponents to reach it.
-You can make allies with everyone.
-you can't attack yourself and your allies.

Game Options:
1.Storms
A tornado constantly appears in the middle of the map and wonders around

2.All Conquered
All islands are randomly given to all players, they get 25'000 starting resources and some upgrades.

3.Main Base
Every players will have The main Shipyard which is a lot better than regular shipyards. Losing the Main Shipyard brings you defeat!!

4.Pirates
Pirates appear on islands near center once in a while. If no one is fighting pirates they will increase there numbers and occupy middle island. Once they occupy it Pirate king will appear.

Moderator
10:48, 11th Mar 2009 by bounty hunter2: A original idea which makes the map quite interesting and fun to play. The map lacks quite some things that would make it much better, such as heroes, game modes and better terrain. It also has bad grammar and...
Read full review...
Reputation Statistics
Page 1 of 4
Show Ignored Content
Page 1 of 4