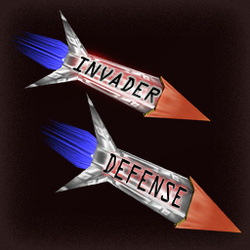 「Invader Defense」
By akaka or krazykid
[tr]
I got the idea from the old school game called space invader. Use the left and right arrow keys to move and the down arrow key to shoot, Use the up arrow key to use special abilitys. Survive increasingly harder waves of monsters and buy upgrades to help you survive.
[tr]

These are the modes:

Moderator
18:53, 13th Sep 2014 Orcnet: "] The game play is brightly nice and well executed, the use of arrow keys are well-implemented and I had no problems in targeting the enemy waves, the use of random events and useful triggers for the defense map is...
Read full review...
Reputation Statistics
Show Ignored Content