In the Elements of Winter 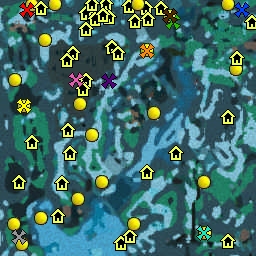 This bundle is marked as useful / simple. Simplicity is bliss, low effort and/or may contain minor bugs.
View usage Statistics Legacy download
**A ONE PLAYER MAP, and note that you must keep the Open Player slot OPEN**

Beginning of the map has been totally changed due to players not being able to read my mind! So play it now - it's much more straightforward!

An Action/Adventure map that employs some fun/cool things:

*A waygate directory system (after completing The Dungeon)

*Bosses with phases (as their hp gets lower, triggers fire to spawn stuff, give abilities, etc)

*Items:
-A novel leveling system with rings:
*When you level up to a certain level with a certain ring, the ring will level up too, and
will give your Hero bonus stats
-Item forging system:
*Certain items can be forged after discovering a certain quest
- The items that you can forge are POWERFUL. Yes, in all CAPS there. The
powerful items are a necessity if you want to beat the map.
-Grace of Cenarius:
*A special item that is required for one of the quests - it heals Ancients, resurrects
trees, and dispels blight. Ownagizer bunnies.

*Quests:
-Most of the quests are discovered by clicking on the Guide's various ability buttons.
This is highly recommended or you won't know what the heck is going on.

*Just play the map, and FIGURE IT OUT. The beginning can be tricky - please don't get
impatient - if you can't figure something out, ask here, or send me a message.

*This map was originally 14MB, now reduced to 3MB. There was an mp3 that was to be played during the final boss of death, as well as a number of skins that General Frank advised against including. There is a mentioning of "Nude Night Elves," and these are precisely the skins I'm talking about. None of the text in the story line has been changed, but if you want the REAL version and are a big boy/girl, send me a message and I will send it along.

*This map is protected with HeavyLock, and retested to make sure it was protected properly. Version of my WCIII FT is 1.21b (No, I do not want 1.22, because of the item cooldown thing. No.)

*When loading the map, it will read "In The Elements of Winter" - this reminds me - there is a unique elemental system employed in this map. I will post an attachment of the diagram soon.

*I also ask that you play this map before you rate it, and when you rate it, give me some kind of feedback as to why you liked it/didn't like it/couldn't figure it out. Vague comments/questions will only get vague answers.

*Credits go out to Kitabatake, Pyritie, HappyTauren, and tons more that make up the marvelous Hive, as well as some modelers from Wc3Campaigns.

*One more thing - save every now and then

Some new features have been added:

Hero autopilot system: for all the heroes (And after passing level 11), you can type their name followed by "on" or "off" to activate their own unique autopilot system. This helps for multitasking, and those annoying times when heroes die because you weren't watching them.

This map will never be approved because no mod has the patience to beat it. Fine. Play your easy or multiplayered maps that took a fraction of the time it took me to make this map. Ignore this work. I don't care anymore. Well, ok, I do care. But I'm still sad.


This is a challenge to anyone who sees this - beat my map, and I will send you an unprotected version of it with the original skins and mp3 - I willl wire it to you over AIM.

In the Elements of Winter (Map)

Map Info View Resources In Use Preview Triggers Download
Reviews
09:53, 7th Apr 2009, by Rui: The idea was good, but the story, gameplay and specially the object editor data need work. Check comment #11 for a full review. My rating is 1,5 out of 5, approximately 2 (Lacking). The map is Rejected.
Read full review...

This is a breakdown of how the elements affect each other. Dragon armor is by itself, and it's just really resistant.

And one more thing - leave the OPEN player slot OPEN when you load the map!

Maps 1
It's not really 2 players - later on in the game, if you complete a quest, you gain control of another player that you're allied with - and the only way to allow that was to leave the player slot open. Did you read my description up there? Just leave the open player slot OPEN when you load the map.

Skins 3
why u keep changin the name from in the elements of winter to and end in winetr...
Btw i had a crash after i went to the curropetd tree of enternity and can u explain why i need these wisps?

Maps 1
I can't explain the crash, because my version runs ok - lemme re-test the protected version. Make sure you have at least 1.21b or better. Also your computer might not have enough RAM to handle it? The trigger is pretty simple, I dunno why it crashed...anyway, I'm re-testing it right now, and I'll let you know if it does that to me.

Anyway, when you go to the corrupted tree, Sylvanas UN-corrupts it, and makes it useful to use.

You gotta make sure you READ THE QUESTS. I can't stress to you how important this is.

"In The Elements of Winter" was the first name I had for this map, and I finally changed it recently, lol

Looks like the problem is most likely on your end, I wish I knew what to tell you.
Last edited: Jul 12, 2008

Skins 3
oh damn i gota have 1.21b or better? well .. i cant cos i play in EuBnet and it requires 1.21a soooo it will soon update to 1.22 so ill test it then : ) anywho in the map in the elemets of winter i didnt have this ''crash'' :/
P.S : the map is awesome i like it that u made it fire, ice, etc atacks and armors : )..
U got lots of quests there and very good ones(i didnt play it all)
1 thing i dont like why some human towers are owned by me? lol
i still dont understand where to use the wisps.. if i have to use near tree of enternety then it has no space ;/

knight26 said:
oh damn i gota have 1.21b or better? well .. i cant cos i play in EuBnet and it requires 1.21a soooo it will soon update to 1.22 so ill test it then : ) anywho in the map in the elemets of winter i didnt have this ''crash'' :/
P.S : the map is awesome i like it that u made it fire, ice, etc atacks and armors : )..
U got lots of quests there and very good ones(i didnt play it all)
1 thing i dont like why some human towers are owned by me? lol
i still dont understand where to use the wisps.. if i have to use near tree of enternety then it has no space ;/
Click to expand...

That is just weird...only with this latest version...in the latest version, you can see the stuff I added - but I didn't change the corrupted tree trigger.

The reason why the user player owns human towers is because those are "points of interest" - there are towers at the Stromgarde camp as well as towers where Tyrande is. If you don't send aid to either one of those places, they will fall. The other Hero that you get (Joan the Wise) will take a waygate immediately to Stromgarde so that you will have her there to start with.

Finally, you need the wisps to mine gold. When the tree is UN-corrupted, you will have control of it, and then you can just have the tree right-click the gold mine that's right there. And there are your wisps.

Keep in mind that if TEXT appears on the screen, there's a reason for it, and you should read it and figure it out. The other wisps that appear are there for you to use - personally, I like to use MOST of them to gather lumber.

Maps 1
NOT cool, whoever rated me without commenting.

I'm not here for ratings. I'm here to give folks something fun to play.

Maps 1
Fun map, took me several tries to complete it..over several days each. It's pretty interesting as well. One of the main annoying things in it was the length, since after around 2.5 hours, wc seems to start lagging. Besides that, which is easily avoidable by saving,restarting wc, and loading, the other problem was the ancients.Yellow and Gold are a bit too close in color to figure out which is which, and also which ancient to build in the areas.I couldn't see any other problems, although I doubt I did everything.

Icons 1 Maps 8
This is my review for "In the Elements of Winter", by TEddington.

Unlike specified in the map type, this is an RPG. You start with a hero and you complete several quests in a single player scenario.

My first critique goes for the lack of originality in this game. The hero you start with is called Sylvanas Windrunner and you possess an item 'blessed' by Cenarius. Yet, you're playing with a race called the Ice Elves, who are basically tinted Night Elves.
Not only that, but you also acquire Tyrande, Blood Elves and you fight Undead called The Scourge.
I don't get a bit of this story, really, and I didn't like it.

Next, the gameplay. The part of talking to Ancients and such was a good idea, somewhat... but why the hell would you allow us to train Chimaeras and other units? It removes the whole point of the game.
I forgot to see if they could pass through the cliffs, too.
I also did not enjoy the fact that Sylvanas started out as a level 6 hero. Why would she be level 6 if we have just started?
My biggest critique goes for the object editor work. The unorganized ability buttons, the wrong button icons, the little creativity on spells, the horribly imbalanced monsters and summons... Sylvanas could summon this 'storm elemental' that dealt 167 base damage and had an attack speed of 1.50 cooldown, if I'm not wrong. How is that balanced?
Not to mention that Deathlord... that's where I stopped playing the map.
Plus, you're not using the most recent patch.

The terrain was not great either, though I've seen worse.

Summing it all up, the idea was good and it could have worked well, but there was no effort on the author's part. Not on the story, not on the gameplay... I could understand the lack of quality on the object editor work, most people don't hit it right on the first shot.
It is obvious that there was a rush to complete the map rather than making it good. My rating is 1,5 out of 5, approximately 2 (Lacking). The map's status is Rejected.
You must log in or register to reply here.

Liberation of the Elements

The Clash of Elements

War of the Elements

Isles of The Elements