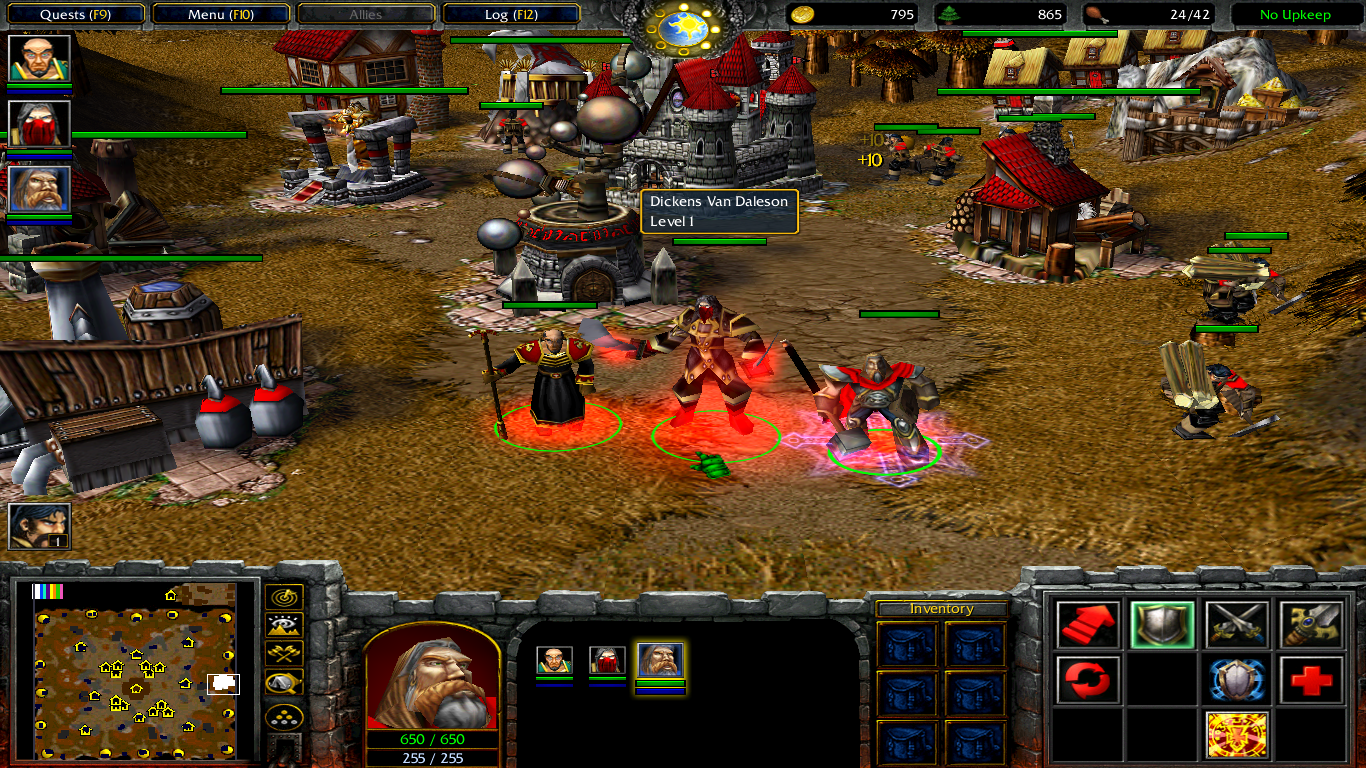 In this map, you are forced into the human race, but worry not. You have access to 3 different variants for different units. This includes the Footmen, Ranged Units, Knights, Siege Units, and Spellcasters. Use these unit variants to take over the area, or try to stop the King Barniok and his bandit enforcers. You can also team up with other players and create a force of reckoning.
3 different variants on (almost) all units.
5 different spell casters
specialized shops
custom heroes, both for humans and for neutral

[tab="Credits"]Note: If your name isn't on ether of these lists, yet you see a resource of yours in the map, let me know and I'll add it as soon as I can.
[/tab]

Version 1.0.1
After reading the recent review, I've made a few changes
*Fixed bug where starting units spawn even when no one controls the player
*Fixed ally issue
*Made Pyromancer's abilities require upgrades.
*Changed the icon for Self-Repair
*Changed the name of Lesser Paladin's to Holy Knights
*Changed some description text

deepstrasz
Credits in the quest log, why not? (for models, skins etc. +maybe even hiveworkshop.com). For some reason I could not choose anything in the Footman Selector and only the Archers. Started with choosing from the south towards the north (catapults...
Read full review...

Maps 4
It's an interesting idea I had envisioned for the Legacy of the Void "expansion" of StarCraft II for multiplayer.


For some reason the yellow player had Peasants where the red player (me) had the Town Hall and starting units. The yellow player's Town Hall was a bit to the south. There's a problem with this. It seems it happens on every game start (two players being placed on the same Start Location; note that I've only filled one slot with an AI leaving the rest blank).
Restarting the level, the player in the northeast was attacked by the mine guardians which should not have appeared.
I don't think it's a good idea to notify everybody what choices a player makes.
I suggest a different place for the choice units. Why not place them near the primary building and make them be removed one a choice is made instead of having them somewhere in the northwest where nobody knows of from the start? Or, at least pause everything (starting units so they can't build anything) until the choices are made and set the camera to the choosing place and then to the Start Location.
The Quest Log has no information except for a command that allows you to change colour (what if some player is the same colour?).
Why is everybody in the same Force/Team when there are no allies?
The players have no name when placing the cursor over them.
The bandit land needs nicer terrain. It looks way too unpolished compared to the rest of the map.

Defenders are weaker than the Footmen and cost more. Nothing special about them. Just a clone. Might want to replace the Defend ability with something else.
Animal War Training mentions Gryphons. There are none.
The Pyromance has all abilities from the start without the need to research training.
Change the Self-Repair icon to look like something else than the Build icon.
Really nice touch with the switching between auras.
Items in the shops are pretty much edited Warcraft III ones.
Alchemist's Stand and Blacksmith's Shop sell different things. Some players might be nearer to only one of these buildings.
Might as well just made a new hero instead of editing the Paladin and removing the Mountain King and Blood Mage. This assassin is a mix of Warcraft III heroes.
The Arcanist is the Sorceress.
The Canon is very similar to the Catapult. What about a longer range for the Canon or something?
I guess everybody would choose the Paladin over the Knight (by the way you might want to not have two Paladins: one a unit and the other the hero; change one's name).

Screenshots could attract more players to download your work. Make the best of them.

A changelog in the first post would be helpful to reviewers and notify fans about the newest implementations to your map.

Maps 4
Credits in the quest log, why not? (for models, skins etc. +maybe even hiveworkshop.com).
For some reason I could not choose anything in the Footman Selector and only the Archers. Started with choosing from the south towards the north (catapults, knights, mages etc.). Also, when choosing Holy Knights, also chose Knights to see what happens. Might that be the problem? Indeed, choosing the mages first eliminates the units in the Footman Selector and Crossbow Selector (except for the Archers).
Why not make an additional selector for Priests?
A thing is that some mages are for the second row while others for the third; their upgrades the same. When the master training is finished for the one on the second row, the training upgrade for the one on the third row move to the second row. Not much you can do about it unless you don't make second row mages able to be chosen two times.
Battle Golem's Self-Repair ability does not appear on him after researching. Why not make a selector for this unit as well?

Maps 4
Conjurers and Cryomancers have the same icon in the selector now.
Cleric's Blessed Aura is too much. It's permanent, it's not a temporary spell. Imagine that with an aura from the Paladin.
There are two Commands quests in the log, one for the main quests and the other for the optional ones.
You could write the Level 1, 2, 3 for the Power Word: Barrier spell instead of increases by 2 in the description like the other spells have in their description.
Isn't Power Word: Radiance basically Lay Hands?
The upgrade for the Crossboyer does not increase attack speed as it says.
Word Barrier can be chosen again at level 2. I remember spells being chosen once in two levels (eg: level 2 spell on hero level 3).
Two hero healers, I don't know...
How do you detect invisible units apart from Magic Sentry?
You can shoot the bandit barrier protected group with catapults... and they have no ranged units there.

So I would very much appreciate it if you could vary the units a bit: Defenders from Footmen, Knights from Holy Riders etc. I'd love it if you could add more selectors, one for the Priests, one for the Golem and one for a new building since the worker has a blank spot in the Build menu.
Would be nice to have credits in the Quest Log too.

And remove the [tr] and [/tr] from the description here.

Could you move the map on Altered Melee section please? thanks

Maps 4
Game crashed after I finished building the Gryphon Aviary. Chose the first unit in the selector (the Gryphon Knight).

Please add credits in the quest log when you have the time.
You must log in or register to reply here.

Mine and quarry model?