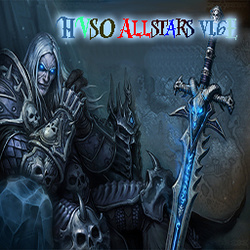 HVSO Allstars 1.6e​
Map Info
HVSO Allstars™ is a Fast-Paced Multiplayer Online Battle Arena, each player will be allowed to choose 1 hero from either The Alliance's Tavern or The Horde's Tavern. This map is playedstyle is like Heroes of the Storm combined with Defense of the Ancients.

Features
- A Powerful Angel will spawn for each team 15 minutes after the Brawl has started behind each team's Barracks, help your Team's Angel to defeat the opponent's so that it can help you push your enemy's structure faster ! The faster your enemy's Angel is defeated, the less your Team's Angel will receive damage.
- Slay The Master Swordsman/Grunt that can be found in each side's top corner and every member of your team will receive 5000 golds each and they will drop 1 of the 4 Legendary Items !
- Use the teleporter that can be found at your base near the fountain to move to the battleground quickly, but beware of enemies that are camping the warp zone so better ask for supports to place a ward there.
- Brawls will be held every 30 minutes of the game, the remaining alive players will receive 5000 Golds and heroes that die just before the Brawl is started will not join the Brawl.
Note that creeps will still keep attacking and heroes who die during the brawl will be able to move after they respawn.