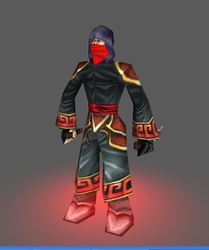 I was actually working on something else, but a flash of inspiration made me change my mind and make this hero.

The Haradrim Assassins (from Lord of the Rings) are amongst Middle Earth's most feared warriors. They're very skilled and extremely well in using daggers. In contrary to most other Haradrims, these guys usually carry a pair of daggers along with some envenomed thrown blades. They're also masters in sneak attacks and hiding in the shadows. Many deaths, especially of Gondorians are accounted to these guys, and their dark glory reaches into most corners of Middle Earth. Although only lightly armored, they can stay for long in the battle, as they are well trained in parrying and evading attacks.

The model is mainly made for Lord of the Rings maps and campaigns, but can also be used for Crusader stuff (as a Saracenian) and such. I removed the entire alt-form's skeleton, geosets, materials, emitters and event objects. In addition, some other bones (like the hair's) have also been removed as they aren't needed any longer and only increase the filesize. I hope you like the final result.

Feel free to use this model in any imaginable way, including editing, if desired. No need to ask me for permission. Have fun with it!

EDIT 1: completely replaced the head and also the blades of the daggers. The change of the head makes this model even fit as a usual assassin or slayer. This change also lowered the filesize a bit.

EDIT 2: my special thanks to MiniMage for showing me some nice programs and special ways about how to optimize this model further, thereby reducing the filesize even more. With his help, this ressource could be greatly improved.

EDIT 3: just applied the "new optimization method" at all Haradrim models i made. Filesize has been reduced and quality slightly more increased. Also replaced the death sound. The previous one was from the Nightelf Assassin, the current is the Bandit, as with all Haradrims.

Moderator
10:55, 12th Feb 2014 MiniMage: Something about the head looks off, it needs some work. It doesn't need much, just a little tweak and I think it'll be approvable in terms of design. However, filesize wise, it needs to be lowered by a lot. It is far...
Read full review...
Reputation Statistics
Page 1 of 3
Show Ignored Content
Page 1 of 3