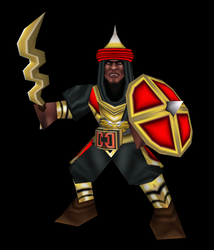 “It was Sam's first view of a battle of Men against Men, and he did not like it much. He was glad that he could not see the dead face. He wondered what the man's name was and where he came from; and if he was really evil of heart, or what lies or threats had led him on the long march from his home; and if he would rather have stayed there in peace.” - JRR Tolkien


Right now I've got two other unfinished Haradrim models, an archer and a spear-thrower made in like-design.
If things change regarding Blizz's EULA from Hell, I'll get back into modeling again and add them.
If not, I'm going to be spending much more time in LotrO or making thins for other games instead.