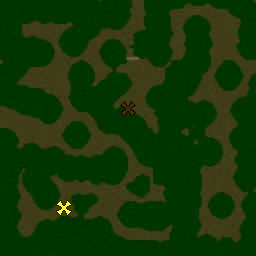 I hate to say this but :

No description, no screenshot, no credits. Just a sentence that vaguely describes the game. This would be rejected from the way it is, without even looking at the game itself.
---
After that I tried the game, and it wasn't better.

In the beginning there is no explanation on what should I do. So I scouted a bit and engaged with an auto-attack combat. Very boring. You can just auto-attack, reload when needed, then repeat 'till the game ends. No tactics needed. No brains needed. Just attack and reload. After cleansing the forest and won the game, I felt very disappointed. It's like a cinematic with mandatory button pushes.

The items I encountered are these : Knife, the Machine Gun, and the Shotgun. Too few for a zombie killin' genre.

Now the terrain. Flat, and, well, lifeless. Just trees. Lots of 'em. The lack of props, doodads is very bad. Bats should be good. Graves, dead bodies and such. The dead peasants are the closest thing for a " decoration ".

All in all, this is a game that should be rejected, until improved.

I don't even dare to play it >.>
Just looking at Da Fist review sums my mind up in couple of seconds.
You must log in or register to reply here.