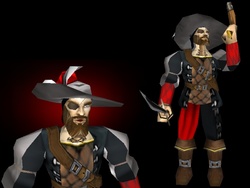 "Take a peasant. Give him a gun. Tell him that with it he'll serve the Emperor and Sigmar in battle. Promise him great honor and rewards. Does this make him a soldier? Too many young men have died like this... Pour me another, Birgitte!" - Eckart Stählmann, former captain of the Empire

Light renaissance-themed infantry armed with a pistol in addition to a sword. This model was made after a request; it uses only in-game textures; animations are linear; portrait is incorporated. Anyone can use or modify it so long as credit is given to those who have contributed making it. This includes the authors in the credits list.


Special thanks to HerrDave because of the great help he's provided me with during development.

Changelog:
1. changed animation "Attack Slam" to "Attack Spell Slam". Thanks Kyrbi0 !
2. tweaked the walk cycle. Again thanks Kyrbi0, and MogulKhan!
3. (1.2) Multiple tweakings to animations, trying to get them flow better.
4. (1.3) Removed a minuscule geoset still present during Decay Bone.
5. (1.4.3) Rework of Stand Ready and all the Attack animations, which are not imports from the optimized bandit by Ujimasa Hojo anymore, and are instead now fully hand-made. Many thanks to Wark, and especially to TheBronze for their feedback and comments.
6. (added variant 2 with morph) As many users would find useful having this unit being able to switch between melee and ranged stances, a second version of the unit has been added, that features melee animations in the default sequences and ranged animations in a set of alternate sequences. This variation has been called version 2.1. Version 1 is being preserved for those who want to take advantage of a (minimally) lower filesize.
7. Added related icons.
8. Added proper collision shapes. Thanks to General Frank for pointing that out!!!

Other infos:
- I discovered that a similar model was made long ago. If you are interested in this model, you might also like Privateer and Pirate made by Lord_T.