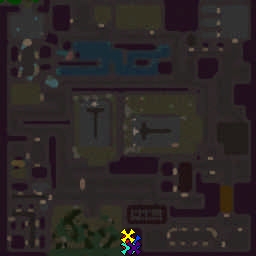 Storyline
Dan Goldner was just an ordinary citizen until he was mysteriously taken to an unknown laboratory. There, he became a part of an experiment done by the mad doctor Balnis. Not sure of what happened, he set his way to find out what the doctor really did to him. And so his story begins..

Note
- This is a map made entirely of GUI, and so don't argue with me with JASS
- Please PM me if you find any bugs
- Please don't modify it without my permission, or post it somewhere else

Good map, but there is a problem. When i killed the mad doctor i went to the exit, but i couldnt pass because of the rocks that are blocking the path (not the ones blocking the baracks, but the path to left) You cant destroy them and i couldnt find another way to the exit. Please fix it . And, yea, when are you planing to make other chapters?

Maps 1
I think Chapter 2 will have to be delayed for a while.. have so many requirements that needs to be done :|

EDIT: on second thought, i might continue working on Chap2. just tell me here if there are any bugs at this map.
Last edited: Mar 17, 2010

Maps 5
There's some flaws in this game:
-consume: overpowered compared to the rifles you find, I suggest something like drain, that lasts one second and drains a rifleman's hp (300 right?).
-Terrain is rather dull, and sometimes you have to go trough long boring halls
-all the prisons with prisoners are rather lame as you can't rly do something with them, some event there would be nice, like a secret or something, else I'd rather see invulnerable gates to show there's nothing to be found there
-maximum level 3? I know you learn new things as you progress, but it goes really slow and takes away all the fun, more active abilities would be nice, also a hp increase when your strenght increases woudn't be bad. So more levels plz.

The idea is good and the story has potential for something great, the stackable items are nice, even tho nets are rather useless, they would be good to hunt something that runs away but I did not come in contact with such a thing.

Maps 1
i forgot if i placed a cooldown on consume. but anyway, i was thinking it was a way to regain lost hp. maybe should balance it a bit. and somehow my idea was that those prisoners are a nice way to regain hp if ever you came with a fight with undead things.

and additional active abilities will have to wait until Chapter2. since this is only his story start. XD

but i'll try to reedit/rebalance most of the parts you pointed out. thanks :]

@Japa: now that's weird, i haven't seen your post up until now. but anyway, i'll check up on that. and yes, i'm doing more chapters, and if i got Chap3 working i'll turn this into a campaign.

EDIT: i'll be remaking this map this weekend now. (that's tomorrow here), so if there's no any bugs left, i'll be continuing with Chap2 right away.
Last edited: Mar 27, 2010

Maps 1
still pending. but i'm moving on to making this a campaign. maybe in 3-4weeks? or so, i can already upload the campaign with this map on it. :]

Maps 1
Far too repetitive, the dialogue is cheesy and whatever challenge there happens to be is supplied by simply your low health vs the amount of guys there are.

It just seems like all you did was spam more and more units as the game went on, instead of actually increasing the challenge.

Maps 1
*approved*
sorry i forgot to do any updates on chapter 2. i'll try to finish it up sooner.

Maps 4
It's not varied. It's pretty much the same thing. The story is what gives some thrill.
2/5.

Couldn't finish the map. Killed the doctor rather easy with net and rifles. Couldn't pass the rocks, character too fat or idk ?
I looked at what other people said and the part with the corridors are true and the one with the minions, too many. Thank god for rifles and invisibility. The randomness of the bombs killed me 2 times in a row, just by death and respawn into 4 bombs and dead again.
It's a pain in the ass to rifle and consume, just to regain so few hp from ghouls/rifleman.
A bug, i think, that i found: that i couldn't consume the Wraith, that can see invisible. She was stunned at 176 hp and couldn't consume her.
Last edited: Nov 15, 2016
You must log in or register to reply here.