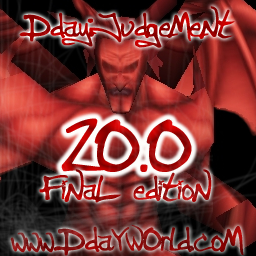 I Basic
DDay: Judgement is a warcraft 3 custom map, based on 3 corridors map. You have two sides, Holy Forces and Damned Forces and you can choose which side you want to fight for. Each side has main building (for Holy Forces it's Castle; for Damned Forces it's Black Citadel) and to score a win you have to destroy an opponent's main building. It won't be easy because it is surrounded by three big towers and many more weaker towers. And also creeps, which respawn in ordered time, will try to stop you and of course enemy's hero/es. Maximum number of players is 5vs5; for those who wants to play against AI, will have to wait because DDayteam have started something about that; just be patient.​

II Heroes
DDay: Judgement currently has 82 custom-made heroes. You will see many known characters from different universe (Marvel comics, Mortal Kombat, Final Fantasy, Starcraft, Warcraft and many more). Team continually works on hero balance, in order that all heroes be equal so you can't say that some hero is weak. Remember that for all in your life you need practice to become good in it, so don't expect that you will win some pro or average dday player after playing three to five games. Practice, practice and only practice.
About hero's spells... Most of them are custom made, because we want to make original hero with original spells. Of course there are Warcraft 3 original spells. For more information I'll suggest you to look into our Heroes database.​

III Shops
Items in DDay: Judgement are 80% unique. For more information I'll suggest you to look into our Items database.
You buy items in shops of course, but also you can buy creeps there which will help you in creeping and farming. DDay: Judgement can be hard game for those who are new in it because you don't control only a hero; you will control also creeps which you can by in specific shops. You don't need to use them, but you will certainly lose that game, because your experienced opponent will use them for sure.​

IV History
DDay: Judgement history begins in a year of Warcraft 3: Reign of Chaos release. Soon after the birth of 3 corridors map (creators: ilPal and Zigzager), man with nickname Toosalty made a spin-off map called 3 Corridors D-DAY and he was it's editor until version 10.5p. That map later involved into DDay Sequel map which was edited by MonkY (also known as DDay's Legend ) and Armafire.
After 14.0 version, that map was renamed into D-Day: Judgement and it's main editor was Monky. Map was so popular that it had several millions of fans all around the world. But life has to go on and MonkY had to abandon dday's creation and after his retreat there are several notable editors such as Alex and Daniel, eScpY until 19.0x series. number of map's fans was decreased by bad changes. Dh-Neo became map's editor and he postponed work on his previous project DDay: Deathmatch so he can work on DDay: Judgement and DDay: Xtremme map. Map becomes more popular than before. At the near end of 19.x era map's editor Dh-Neo had to retired (because fans wanted new version but Neo couldn't find the time to update.). After Neo, Markone, current editor, took over the challenging editing job. His first version was 19.9F, he dedicated the map credit to DDayteam as a whole.
So as every other thing on the world even this map continues to evolve and you will see what we are planning to do with it. Enjoy in this map and if you want become part of it by helping to make it even better. ​

Map Info View Resources In Use
Reviews
Septimus: After a good discussion been done with the rest of the mod/admin, the older resources have been remove and this newer resources approve. However, I would just paste the old review into it. 16:24, 17th Jul 2008 MasterHaosis: It is day...
Read full review...

Septimus: After a good discussion been done with the rest of the mod/admin, the older resources have been remove and this newer resources approve.

However, I would just paste the old review into it.

16:24, 17th Jul 2008
MasterHaosis: It is day of judgement! hey man awesome map I like all parts of this map. Well man I like this your new hero Tristania (Demon riding Leopard) I played with her so long. In this map are lot of fun, alot of different spawning models,alot of Heroes selection etc.. My opinion is that you should use more custom models to replace boring blizzard's models... Anyway rating is Highly Recommended
[APPROVED]

Icons 1 Skins 6 Maps 5
thanks for that,but as I said we don't use much custom models because it will increase significantly the map's size.

Packs 1 Maps 35 Spells 8 Tutorials 5
That is a very old review from your old resources..

Icons 1 Skins 6 Maps 5
I know, that's after 20.0F (without E) release. We had one great bug in that version so we released this one

Icons 1 Skins 6 Maps 5
me to. Now I help in making it. So all who wants to help or give some esuggestions or comment visit our official site: DDayWorld

Maps 1
An average AoS map with too many heros.

- I didn't test all the heros but the amount of them is really disturbing. I doubt that all the heros are balanced which means there are good heros and useless ones. Keep the number of heros low because at some point some heros just get too good when compared to another ones.

- Things that took place every now and then were sometimes refreshing and sometimes just made me angry ("Oh shit. What now?!").

... This map must be in DOTA 2 like arcade mode map

. The creator, the builder of this map, is still in this forum? ...

There is a map in the section of Arcade maps in DOTA 2, which is called DDAY: Judgment, whose creator is Cactus, is someone from this community the creator? The map is incomplete, it's like a beta version, but it's very good. Hopefully someone can review the map and contribute to its creation since without a doubt, it would be played by many players.

I hope not to break any rule, the link is:

ALL THE BEST ...
GREETINGS ...
You must log in or register to reply here.

Warcraft 3 Re-Reforged: The Scourge of Lordaeron Act I