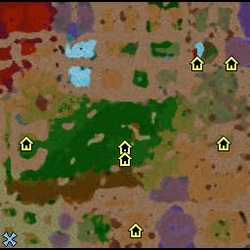 Custom Hero Arena 3D
- As the name states, this is a Custom Hero Arena; it is intended to be a multiplayer game.
Heroes:
- There are 84 heroes to pick from, their base stats and stat gains are listed. They are balanced through YEARS of testing.
- You then pick 5 skills for your hero, each from a different category.
- Offensive: Abilities that deal damage. Generally a farming or PvP skill.
- Defensive: While these can be semi-offensive, they are generally geared around your survival.
- Misc: These skills generally go both ways, and are more versatile.
- Innate: A simple ability that automatically levels every 10 levels
- Ultimate: These can be of any nature, but are generally much more powerful than other skills and have longer cooldowns, usually.

- On game start, player 1 can select from a variety of different game types, and modes that work with those game types. After you pick your main game type, you are given more options shops for options available to that specific game type.
- Normal Mode: There are duels every 4ish minutes in which an equal random number of players from each team compete in an arena fight to the death. When not fighting, they are in the "field" where there are various creep camps to kill for gold and experience. Of course, you can also PVP outside of duels. You win by reaching a kill count. You can also enable "Kill Ragnarok" mode, from within this mode; Where to win, you complete various minor quests and have to go through boss fights and kill the final boss. There are still duels and PVP though.
- Team Brawl Mode: There are no creeps. A large area of the map is blocked off and teams are forced to fight in the area. The only way to get back to base is to die. Game is won by hitting a kill count.
- Gladiator Mode: There are no creeps. This is a FFA mode where all the players duke it out in a large arena in a series of rounds. Whoever wins 10 rounds, wins.
- Capture The Flag Mode: Everyone knows what CTF is. There are few creeps in this mode. The flags spawn behind team bases and slow whoever is carrying them. Also, units with a flag cannot become invisible. You return your opponents flag to your base to score a point. You cannot enter your base with a flag if an opponent has your teams flag. Flags cannot be dropped unless you die. X number of flag captures wins the game.
- King of the Hill Mode: Again, a classic. Few creeps spawn. There are 5 hills on the map, which ping every 2 seconds in the color of their owners. You capture hills by standing on them for 15 seconds if neutral, 30 if owned by the other team. You gain points for every hill you have every second. You gain additional points for every hero your team has on a hill every second. More players on a hill, the faster the hill caps.
- Plant the Bomb Mode: Few creeps spawn. A bomb spawns in the center of the map, players must attempt to take it either to the front door, or back of their opponents base, and detonate it. You must stand on the circle with the bomb for 15 seconds to detonate it. Units with the bombs cannot become invisible, have no mana, and are slowed.

Side Notes:
- There are hundreds of items in the game, all of which are balanced around their price. The more expensive an item, the less stats you gain per gold spent. There are no overpowered items.
- Despite the reputation that all "Custom Hero" games have; passives do not always win. Skills in this game are balanced heavily around various parts of the game. Strength, Agility, and Int heroes are all equally usable.
- There is a huge learning curve to this game, like other games. Good players take uphill/downhill into account, attack animation canceling, spell animation canceling, kiting to win, ect.
- There are over 1,000,000,000 possible builds. There are about 100 unique builds. There is no best build. No build can win hands down. There aren't even 10 best builds.
- This map has been in the works for 2 years. In that time there has been about 50 beta edits. There have been ~4000 testers, and easily 50,000 hours of testing.

Credits:
- A list of credits are in the map, so I don't know them all off hand; the credits list was made a good year ago.
- Slayerdragon: His old CHA map inspired me to recreate the entire thing from a blank slate. He had a brilliant idea for a game that he never came close to finishing.
- Vex: I use some systems of his
- Aceheart: Save/load system
- There are a slew of item models I use in the game, and I gave credit in map for them; but am not going to type them all out here.
- The thousands of people who post bugs and suggestions on the CHAO forums.

Anyone interested in CHAR beyond what is offered here, stop by www.chao.forumclan.net We have more information about the game than you can shake a stick at!