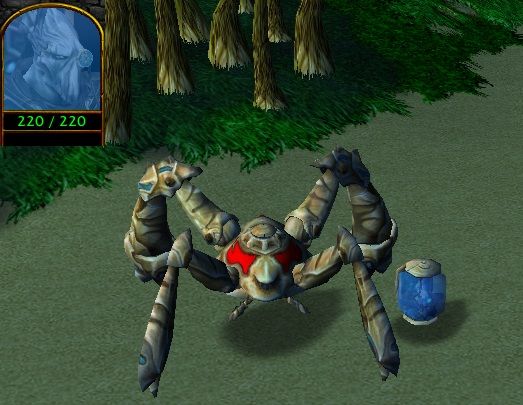 Well what on earth should i say about this friggin' model?

well, the fact that i joined the Hive, hoping to eventually make it?

But yeah, there it is, ladies and gentlemen. A Cinematic-like Protoss Dragoon from StarCraft 1
It definitely took me a while to make this one, First it was a few months for the texture, which was done by Daenar7, then it was few more weeks or so for animations, which are done by Gluma. Aand in between it all, was just a lot of waiting, waiting, and waiting, as i searched for stuff and people i needed. So thank you very much, guys One humongous project is finally done

the model itself has two anim-sets, out of which one is with a broken leg, to further emulate what i saw in a certain cinematic. The portrait is heavily edited from sc2 zealot, and again, made to look close-enough to how the StarCraft1 dragoon portrait looked. The portrait is also somewhat useful as its own doodad, but the dragoon needs it for the camera The main model is obviously best as mechanical ground unit that has different attacks for ground and air.

so.. enjoy and give credits to Misha, Daenar7, and Gluma if you use the model.. Or..

'*warning beep* Drop your weapon! You have 15 seconds to comply.'

Models 64 Icons 1 Packs 2 Skins 4 StarCraft II Resources 2
Hmm.. this guy has quite a lot of filesize.. maybe i tinkered lill too much with it.. Ouo

Models 64 Icons 1 Packs 2 Skins 4 StarCraft II Resources 2
well it kinda started out as a SC2 model, but so far i really haven't been able to make a complete 'thing' out of it for SC2 '~' Although, I know war3 mapmakers can compress stuff

That's one sick model. I love the head in the water jar tho, I just feel like kicking it in the sand or opening the jar and shove it with sand or mud... hehehe.

Maps 3 Tutorials 1
Well this certainly looks more like Dragoon from Starcraft 1 cinematic than Dragoon the ingame unit, most noticeably the legs are not same. You know kinda how cinematic SC1 zergling don't look like actual SC 1 zergling which don't look much like SC2 zergling. Consistency, not a strong side of Blizzard.

Anyway Model itself look great and my only complaint is that there isn't blue liquid spilled around in death/decay animation around Dragoon (or at least I can't see it in 3D Viewer, just water "explosion" effect). Oh and obligatory mentioning of 1 MB size for a unit model and I guess hope that future patch really does increase map size.

Models 83 Icons 17 Spells 3
So you have a replacement for me? XD

Maps 1
First of, I'd say you did a good job on this, So now he strikes using that shining blue eye or something (I love the animation btw), but why his head is inside a botle?

Warseeker said:
why his head is inside a botle?
Click to expand...

Models 64 Icons 1 Packs 2 Skins 4 StarCraft II Resources 2
I wonder.. did anyone test that derp trigger action that i left, on the dragoon

Models 64 Icons 1 Packs 2 Skins 4 StarCraft II Resources 2
yeah it's kinda bad, but i left it there as a hidden option

I love Starcraft. And this is a pretty good recreation.

Models 64 Icons 1 Packs 2 Skins 4 StarCraft II Resources 2
I don't think the portrait is really meant to be more than a small tank, dtnmang
but maybe someone could make an actual stasis cell/prison, which would not really have water, but forcefields

[email protected] Thank you 'u'

Wow, great job! The face is great and the legs are very detailed!

Maps 1
Well, isn't this a gorgeous one. I shall use it for special occasion. Thank you for making this.

Excellent work. Definitely love it. Portrait model is so comfy.
Makes me want to make Starcraft 1 3D campaign and intros in Warcraft engine.
You must log in or register to reply here.

Protoss Dragoon... Seen it on a map