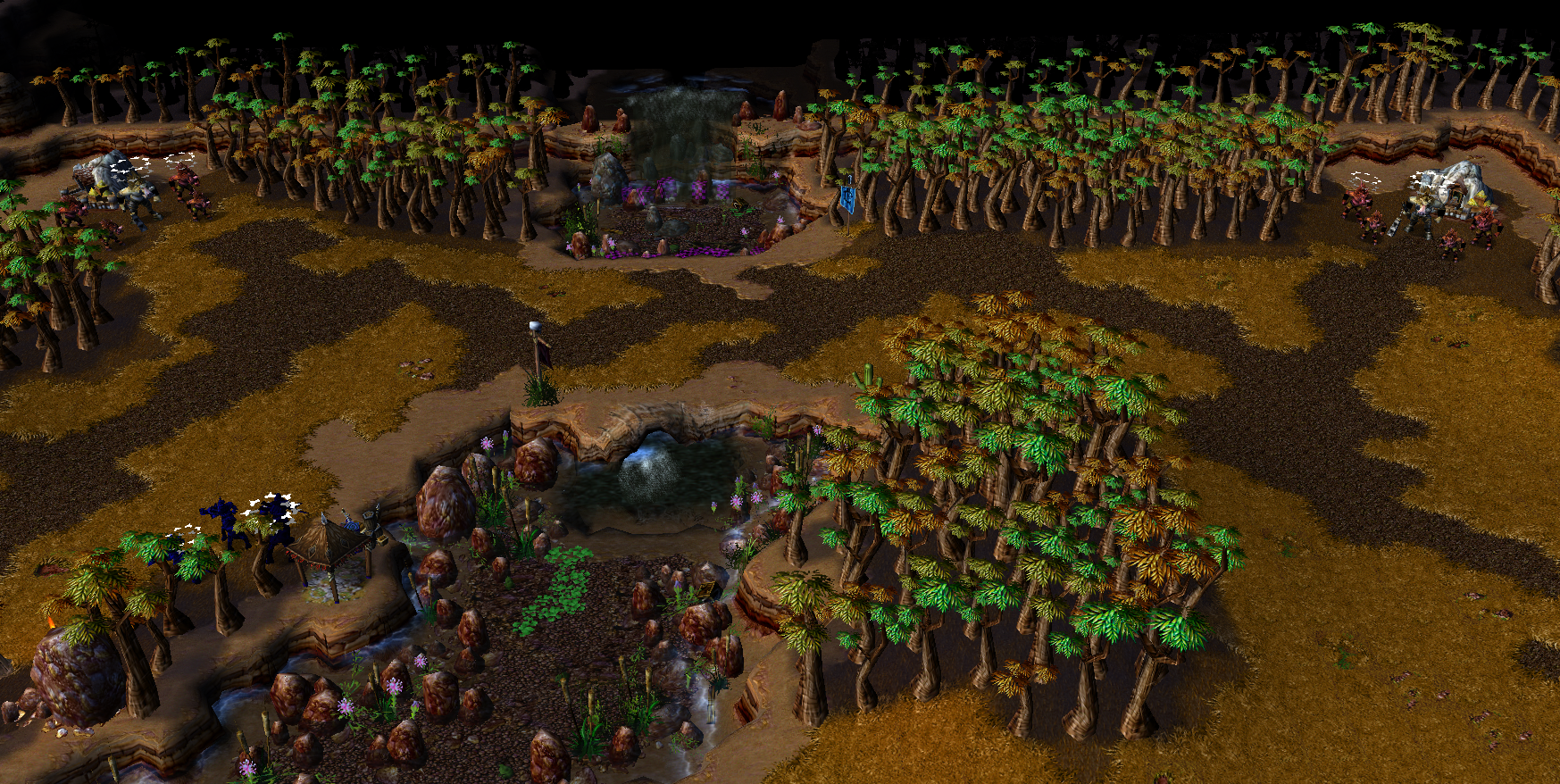 This bundle is marked as useful / simple. Simplicity is bliss, low effort and/or may contain minor bugs.
View usage Statistics Legacy download
Reactions: deepstrasz and WolfFarkas
This map is my first ever published. It is a 1vs1 melee map. The small size is maybe the only thing that bothers me a little bit about it, but other than that, the map should be fully functional and balanced. It has been tested and updated several times, but initially, it was completely made in one night.

There is 1 Tavern, 2 Goblin Merchants, 2 Goblin Laboratories, and 6 Goldmines including the main.
There are a total of 8 green creep camps, and 8 orange creep camps.

Update: - Tight ramps, paths, and river crossings have been removed and/or widened.
- Gaps between rocks and between trees balanced out. (no more gaps even after cutting down trees you wont encounter gaps)
- Thunder Lizard green camp switched with lower level kobolds.
- Flat terrain fixed where possible.
- The couple of spots where you can see camera limits have been blocked out.
- Camp mode for goldmine creeps removed.
-1 of the 2 possible expansions has been given higher ground (the closer one) to make differences in level for expo difficulty. Please let me know if this is correct, if not then ill re-update it.
-Screenshots on Hive have also been updated for the few changes in the new version. 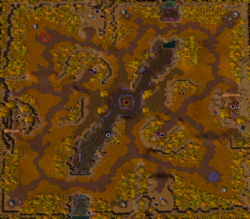 WolfFarkas
I dont know in a practical way the recipe for a 5/5. Even my best map has 2 or 5 flaws, To me a 5/5 is a map that it could be recommended for Ladder play and money prize melee contest. Wich I can tell is really hard to get that level, players can veto...
Read full review...

eubz
Centaur Oasis Submitted by nadim - Trees in some parts are too lined up and do not feel natural. - Terrains are flat in some places, needs more work on this using/Applying Height. - Some places have some random doodads and are arranged very...
Read full review... 1) ramp small
2) that path to the tavern, small
3) gaps between rocks small units can walk and pass that. big ones cant
4) gaps between trees bad for balance, wisp can hide and abuse scouting. 5) Thunder lizard L6 as green creep?? no, 750 hp, splash damage, slam, green creeps are ment for early, this is gonna take you quite some hp.
this units should be used in orange creeps and red, not green. 6) this paths should be wider, like in Terenas Stand IMO 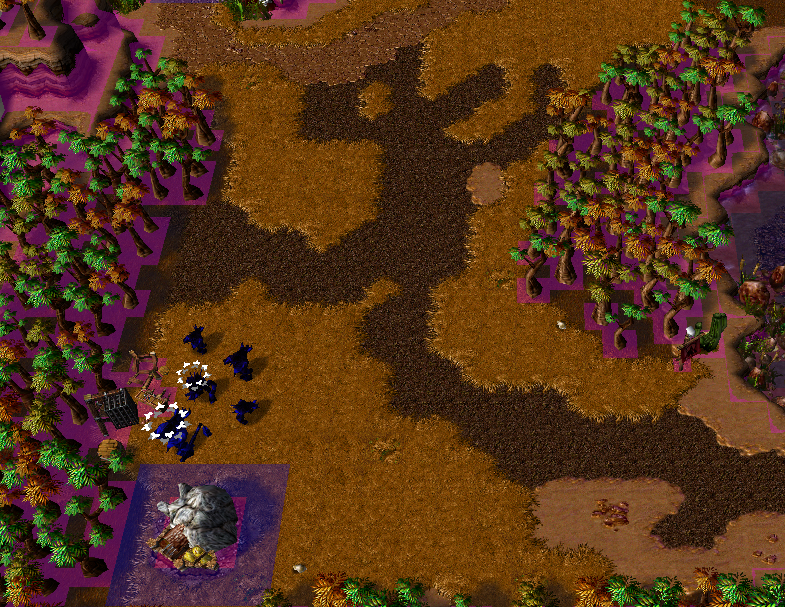 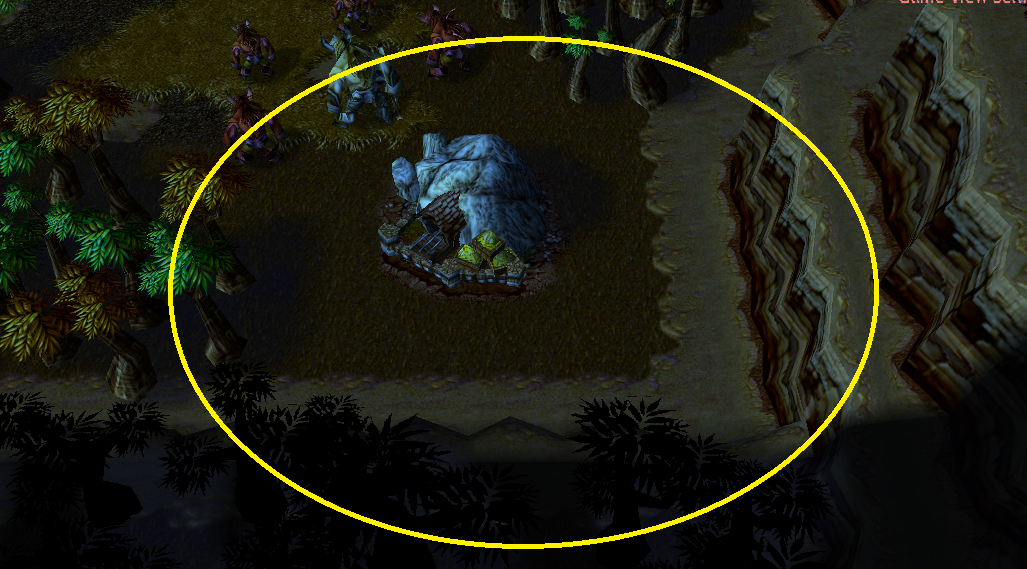 8) Good maps are designed in such way that you dont see the camara limits, that means to have the map surrounded by a 5 pixel amount of cliff and or deep water. Put things just rigth near the camara limits makes this happen, you can fix it by increasing the camara size and map bounds. with this 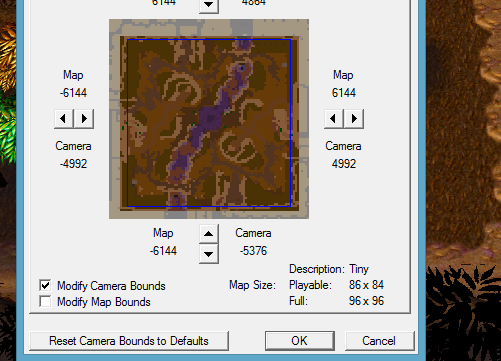 9) when you have 2 expandings options, 1 should be more hard, because humans get the benefit of multi-expand options. Both are level 15

10) Goldmine creeps should not be in camp mode, you can build things near when set in camp mode. the corner goldmines may have risk of aggro (being attack while passing by).

IMO is very near to approve, with 3/5 but I think is fair to say that it should be set to awaiting update to improve mostly the balance.

Maps 2
Thanks a lot for taking time to review this. I am currently working on every point u have mentioned, and also increasing the beauty of doodads and terrain. Will be releasing the new version in the next couple of days.

I have also noticed that my map bears a striking resemblance to Terenas Stand. I havnt gotten the idea for this map from there. Only now did i notice how similar they are...

Maps 2
This map has been updated and should be fully functional and balanced.

I'd also like to know what u (anyone) think would make a map like this a 5/5, so that i may improve on my skill in future maps..

nadim said:
This map has been updated and should be fully functional and balanced.

I'd also like to know what u (anyone) think would make a map like this a 5/5, so that i may improve on my skill in future maps..
Click to expand...

I dont know in a practical way the recipe for a 5/5. Even my best map has 2 or 5 flaws,
To me a 5/5 is a map that it could be recommended for Ladder play and money prize melee contest.
Wich I can tell is really hard to get that level, players can veto maps in contest, as example human players can veto a map if it cant be win in 1v1 against undead because lacking the use of an expansion against undead.


1-always try to avoid the aggro. users do wisp scouting or peon scouting and creeps in the paths may attack 3) this can be improved. 4) trees can be more irregular that goes also for the camara borders.
and if there is a very open space, a bunch of 5 trees is a nice option 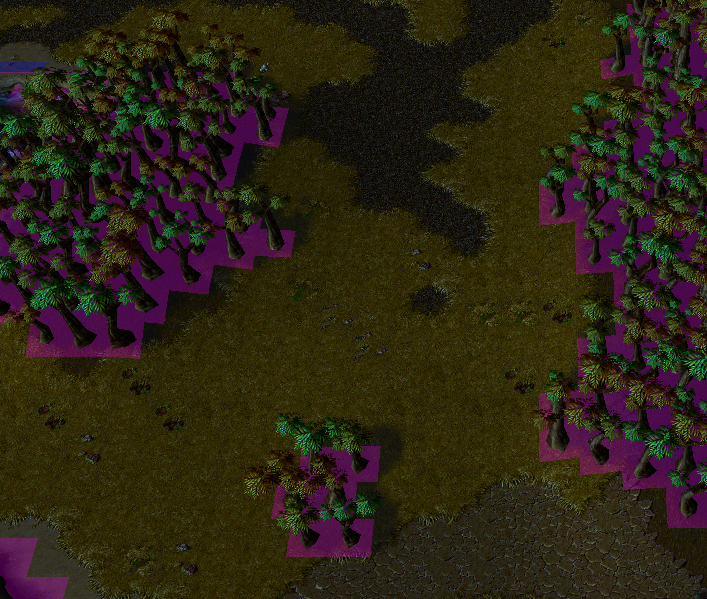 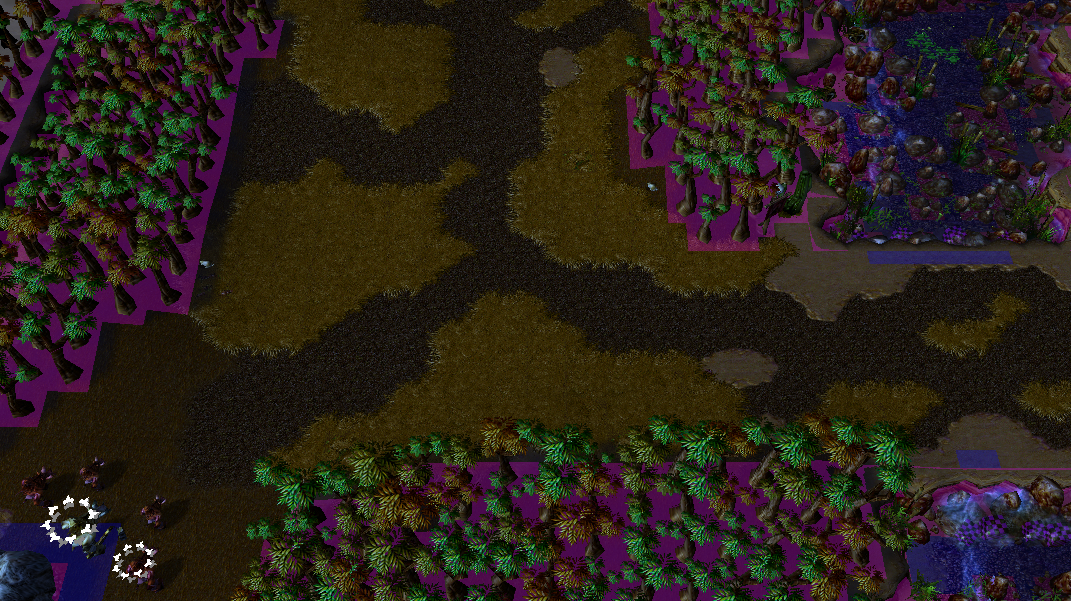 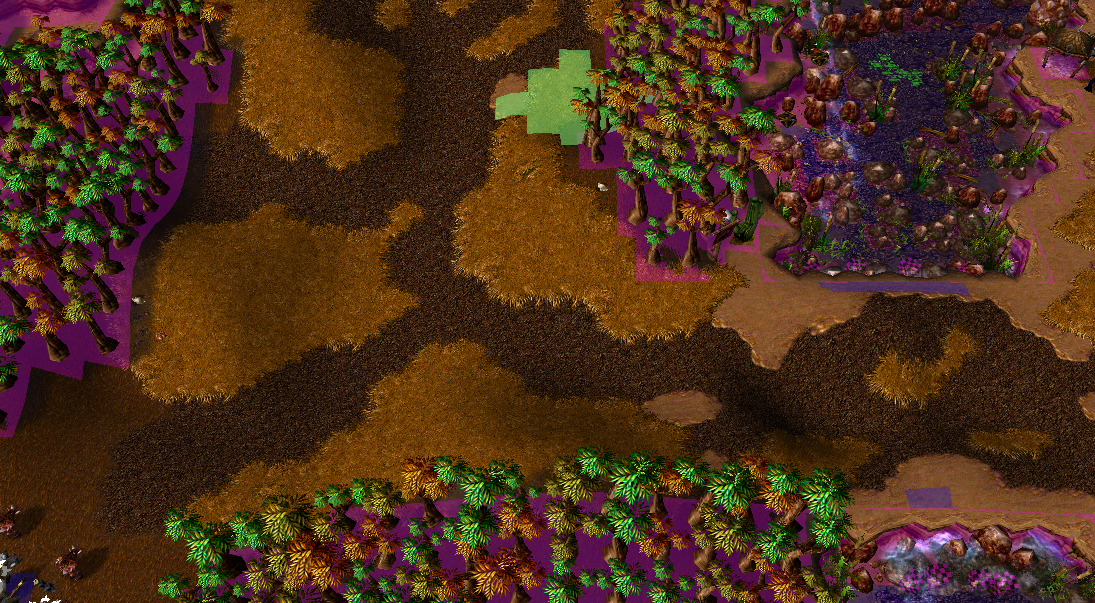 maybe I rushed it but thats the idea.

6) since there are 2 expandings, 1 can be a red creep, if there is no red creep in the map, also, is good to avoid humans to multi expand.
so is common to see a first expanding orange and the second red creep.

7) a charged level 2 is to much for a green creep level 6, level 6 creep should loot a power up or permanent level1.
charged level 2 is good for a level 13-15 creep.IMO, because some charged L2 are powerfull for scouting. 8) map has no merc. camps, lordaeron summer merc. camps are used for balance.
because you can buy the healer priest troll early to heal yourself, like the orcs. Others merc. can be used
but I sugest you to read mafe tutorial of merc.camps, 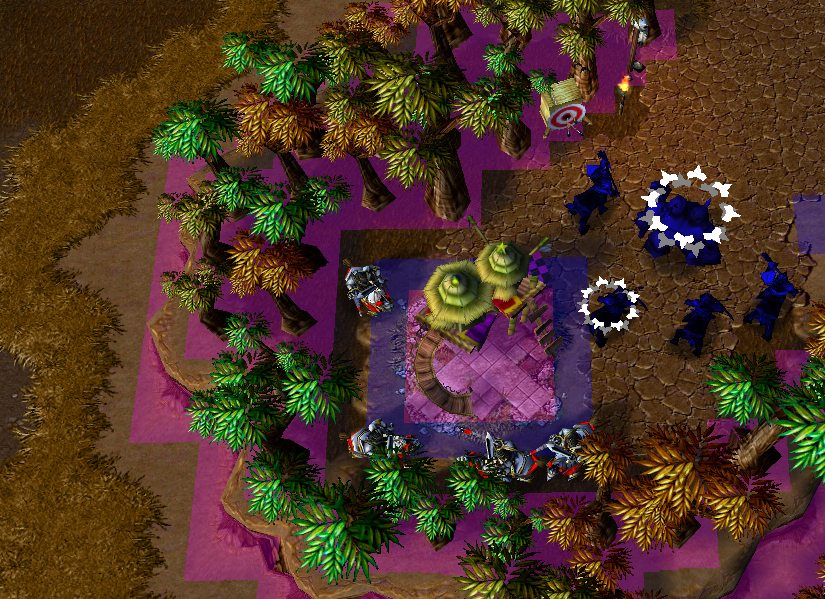 10) while the water in the middle is nice to see, actually is cutting you gameplay. your map has 3 ways of attack, but it can have more, like 5, thats why I tend to put the water in the edges or corners.

What I do like of your map is the work with cliff,.

At this moment the thing most important regarding balance is the charged level 2 in a level 6 creep.
The flat terrain in some parts s easy to detect but the cliff helps and I like to be more hard reviewer with balance than enviroment, even if flat terrain is very punish because it is easy to detect.

to me it can be approved.

Many of my statements are optional or IMO, since you asked, I did a more deep review so you may earn more score,

but to me is still in 3/5 considering both terraining and balance.

Maps 2
Thanks for taking the time to review this again Ragnaros, this one is even more in-depth. Your info has been very helpful as i think it made this map much better already.

I think i limited myself with the flat terrain because im scared not to make too much high grounds, but it will be solved for sure.

I'll be taking more time to plan my next map as this one, quite frankly, had no planning at all.. I will continue to update it until it is approved, but for my first map I humbly and happily accept a 3/5.


- Trees in some parts are too lined up and do not feel natural.
- Terrains are flat in some places, needs more work on this using/Applying Height.
- Some places have some random doodads and are arranged very randomly, please work on this.
- Position of neutral hostiles groups in some places are very close to each other. Separate them a bit.
- Avoid using cliffs too much. You can actually use Height to create one.
- The map is good at this rate but needs more work for approval.
- This must be worked on until updated
- AWAITING UPDATE still
You must log in or register to reply here.