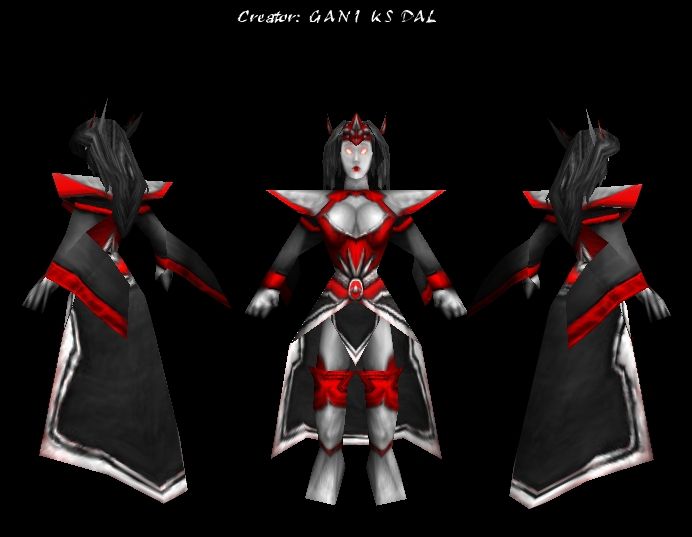 This bundle is marked as approved. It works and satisfies the submission rules.
View usage Statistics
Reactions: 67chrome
This is a skin I made cause of a contest... but it was over when I was finished. xD
So I decided to upload it here on THW.

Description: The Black Elves are a race in Keiji's Dawn of Life. Their skin is of an ash gray and their hair is black. Their eyes are of that of a demonic red glow, as they were once corrupted by a demon. The Black Elves tend to wear very spiky armors. Scaly, and mostly consists of dark iron or silver. Ravens are also a very fond theme, so they use much black feathers on their equipment. For clothing almost all dark colors are very attractive, and the lust of wearing the bones of slain Demon opponents is popular, in order to show the demons just how superior they are.

Update 1: Make the skin smoother + little more shading
Update 2: Maked some big changes and added a few stuff
Update 3: reworked her face, and her armour( shoulder, boots ) and added more Team color, made the glow much better.
Update 4: reworked her face + her eyes.
Update 5: added more contrast to the face + made the cape cleaner.
Update 6: Darkened the cape
Update 7: added more highlight's (fixed the face a bit) + lowered the eyes a little bit.
Update 8: Fixed the nose.
Update 9: lowered the eyebrow. and added some stuff.
Update 10: REMOVED those 'things' on the cape.. + some small changes.
Update 11: Fixed that weird highlight on the nose

Want to thank Misha (for help with the eyes)

So hope you like it ^^
plz give credits if you use it.

View in 3D
Reviews
18:45, 22nd May 2009 Hawkwing: We've decided to approve your skin, but we want you to continue to make changes or we may consider returning it to pending. The eyes are a rather strange shape and they are oddly defined. Also, work on the shading in...
Read full review...

Silverfish423 said:
yes, the face is the problem at the moment. it looks stretched and not very natural (to me). the nose looks long because their is lighting all the way up to the eyes. make it gray like the rest of the body (the part between the eyes) and it will fix that problem. also, make the eyes less slanted and make the shade of pink slightly less bright. if u fix those, i will give u a thumbs up and +rep =D
Click to expand...

I will try to work a little more on the face

Narandza said:
How come this has 49coments! is it, updated? It is freehand but... mate work on it its not "high quality" how they call it...
Click to expand...

Yes, I updated It. Everything doesn't need to be "high quality" to be good

Misha said:
i think it is good enough and decent.

GAniksdal said:
Yes, I updated It. Everything doesn't need to be "high quality" to be good

Misha said:
Now get to work on your next skin so i can ripp that to shredds too

Got much to do for the moment

Got much to do for the moment

Skins 2
I like it a lot. I have 2 suggestions thought:
1. Lower the eye brows and turn them inwards a little.
2. Make some kind of pattern on the cape.

Lorne42 said:
I like it a lot. I have 2 suggestions thought:
1. Lower the eye brows and turn them inwards a little.
2. Make some kind of pattern on the cape.
Click to expand...

Can someone make Sorceress without clothes?

u must strech out her eyes too

Skins 20
---UPDATED---
Sorry for the delay guys.... I added some stuff on the cape..should I have it like that or was it better before?

Dan van Ohllus said:
The glowing effects on the cape ruins the skin.
Click to expand...

indeed, remove that or this could go to "pending" and eventually "rejected"

Black elves are so awesome. I read your description and it gives alot of ideas for my map! ))
u are the best ))
Make more of Black Elf units...

Witch-King said:
Black elves are so awesome. I read your description and it gives alot of ideas for my map! ))
u are the best ))
Make more of Black Elf units...
Click to expand...

I'm working on a black elf spellthief now. I will release it in some days I guess.

Woof... ) i can't wait for that release to come

I'm working on a black elf spellthief now. I will release it in some days I guess.
Click to expand...

good, i'll be there

Maps 1 Tutorials 1
A teeny bit monotone and awkward, but "monotone" rarely counts with me. 3/5

Maps 1
I really really like the colors and the new eyes.

Skins 20
Thx for all the comments guys

Allways good to hear that someone likes my skin

Interesting...
You must log in or register to reply here.