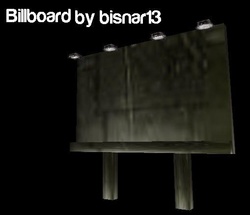 Used in modern times, to advertise some products while people are driving.

The model has no ad.

update: Fixed the rotation and height of the model

update: Added a portrait, which has a dummy advertisement

update: Changed the death animation to a more realistic and cool one.

update: added decay animations that would fit the death one

Please give credits if used

Moderator
22:46, 18th Oct 2012 Kwaliti: You could really add a plane with a dummy texture which people can replace and have custom billboard design. EDIT: With that death animation, you'll need a decay animation as well. EDIT 2: This is a doodad, you...
Read full review...
Reputation Statistics
Show Ignored Content