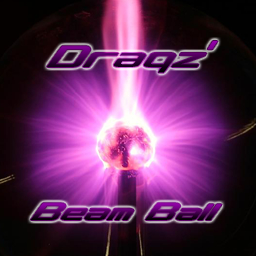 This bundle is marked as approved. It works and satisfies the submission rules.
View usage Statistics Legacy download
Beam Ball:
A team sport inpired by UT2003 "Bombing Run". There are 4 positions to play, Runner, Sweeper, Sniper, and Brawler. Each have their own special ability and stats, but they all share a laser ability. The object of the game is to get The Ball that starts in the center of the court, and into your OPPONENT'S goal. Having the ball is a burden, your movement is severely impaired and you may not use your laser. The ball looks like a cannon ball and has a large pulsating white beam eminating from it. When you have the ball you can Throw it in front of you, use this ability to pass the ball towards a team mate, over a wall, or into a GOAL! A green indicator on the ground only visable to you is your current target. Goals are located in the top right and bottom left corner of the map, they are identified by a large arrow and streams of fire going into them.

Beam Tag:
This game is similar to Beam Ball in that everyone has a laser. But you are not concerned with goals, just killing! the first team to reach the designated amount of kills wins. In the Beam Tag arena, you will notice "exclamation points"; stand under these and fire your laser to set off a trap! (watch out campers!)

Description:
The Sniper is almost always defensive in nature. They usualy either defend their team's goal to prevent scoring or provide cover for their allies attempting to score. They have the ability to Camp which gives them a bird's eye view of the court which alows them to see much farther and aim more acurately. While camped they gain a large range bonus and are also invisible to enemies, however the Sniper will be revealed if they fire a laser.
---------------------------------
--Brawler--
HP:300
Range: 400
Width: 30
Speed: 295 (+10 Athletics bonus for Checking)

Description:
The Brawler is very durable and usualy takes the front lines in battle. He has 300 HP which means he can take 3 laser hits before he is sent to Jail. The Brawler specializes in athletics making him quick and also improving his ability to Check. The distance of his Check is greater with higher athletics upgrades.
---------------------------------
3.0 Fixes and Additions:
-Changed the Hit Points of all the players.
-Brawlers are now more balanced (used to suck) They have 300 hp which means they can take 3 laser hits before dying.
-Check has been improved, players can now be pushed over a ledge.
-Added a "-suicide" command to kill yourself.
-Fixed the goal scoring system, once a goal is scored, everyone will be sent to jail and a new round will begin with the ball in the center.
-Changed many UI problems, all information should be correct
-Added unit stats to QuestLog
-New preview mini map icon


Thats all for now!
-Draqz
Contents

Maps 21
Eh i liked older versions better i think..great game though i love it 8\10

Maps 4 Tutorials 1
I have gotten 2 people that have told me that lately. Not sure why people like the old one better. This one is so much more dynamic

One of my favourite maps. Awesome job. Everyone should try this out

well they buffed the brawler a lot in this version, i would have to agree that the older version is better (from memory). Brawlers do not die from 1 laser shot, which defeats the whole purpose of the game, unless it goes into a rock paper scissors mode where snipers kill brawlers, brawlers kill sweepers, and sweepers kill runners (just an example).

duke-zip said:
well they buffed the brawler a lot in this version, i would have to agree that the older version is better (from memory). Brawlers do not die from 1 laser shot, which defeats the whole purpose of the game, unless it goes into a rock paper scissors mode where snipers kill brawlers, brawlers kill sweepers, and sweepers kill runners (just an example).

it is more of a rock paper scissors type of deal. sweepers kill brawlers because their grenades take em out in 1 hit.

sorry to say, but the grenades are close to useless. Their AoE is too small for the ammount of time it takes, it is slow moving and it is childs play to dodge. what it is really missing is AoE and an element of surprise.

Brawlers are still very easy to use since they end up being faster than anyone. They really don't even need to upgrade their lazer, i never do, and even looking at one that does, they become 3 hit kill vs 1 hit kill, excluding check. 2.9>3.0 i must say
You must log in or register to reply here.