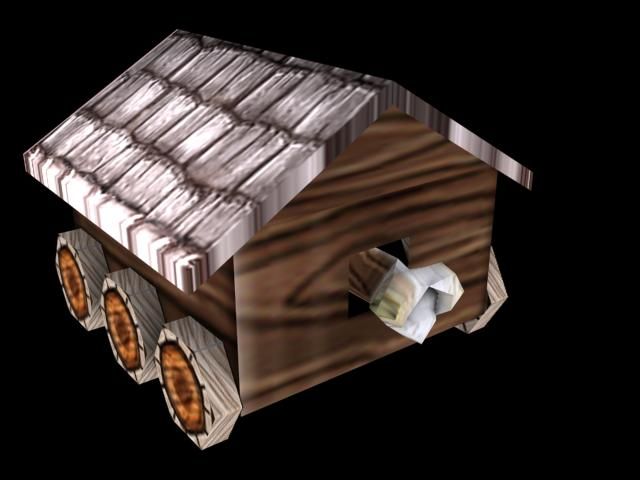 This bundle is marked as approved. It works and satisfies the submission rules.
View usage Statistics Legacy download
Reactions: Gumberbunbder, MythMaster2126, deepstrasz and 5 others
A simple model made in two hours, to test this new section. I have not seen any ram model so I decided to do one of my own.

Like the previous model, I want this model to be judged by donut3.5 (the same reasons)

How to import this model Sanity check More info Download
Reviews
[APPROVED] Jan 23th, 2008 This looks really good, however if you could do the following thing it would boost its performance: - Add a simple decay animation, this will make the death look much better. EDIT: Fixed the portrait, should look better...
Read full review...

[APPROVED]
Jan 23th, 2008
This looks really good, however if you could do the following thing it would boost its performance:
- Add a simple decay animation, this will make the death look much better.
EDIT: Fixed the portrait, should look better.
PM me when these changes have been made, or you have any further questions.
--donut3.5--

Models 70 Maps 8
Im wondering why noone made such model before nice anims , good use of textures, low file size: 5/5.

Kofi_Banan said:
Im wondering why noone made such model before
Click to expand...

Me too, I noticed a lack of more generic models, like cannons, elephants, etc

I like the model and the animations
so I'd say 5 but the hexa wheels are a big aesthetical problem and the portrait is abit funny so I have to say 4
(PM to MechanicalMan: sori prjatu kaj morm jaz sm pravičn sodnik )

Models 5 Icons 1 Tools 1 Maps 1 StarCraft II Resources 1 JASS 2 Tutorials 3
I give it 4/4, animations could have been more noisy and realistic, it's way to plain and simple, yet the model looks nice and performs correctly, I give it 4 stars.

Memory? It gives you memory, after all, it is a RAM.

Anteep said:
Memory? It gives you memory, after all, it is a RAM.
Click to expand...

with in other news.

Good model. Nice, simple and effective. Reminds me of the old Age of Empires seige Rams

Models 32 Icons 3 Packs 1 Maps 5 Tutorials 1
Yeah, I took inspiration mainly from those. And is simple, since nobody make this kind of model and I can afford to make it so simple.

you stole my idea...

Nice model. I think it should have more war-ish look to it. I suggest you add an insignia of some sort on the roof of the ram. The battering ram itself looks small compared to the rest of the shed containing it. I suggest you make it bigger. I don't really like the color of the wood. Maybe you could use a lighter shade of brown for it. Very good idea for you to have made this model since the model's section is lacking it surprisingly. I give it a 3/5.

Maps 4
reminds me of age of empires

Models 1 Skins 7 Maps 3
This is excelent model, real medieval battering ram that was usually in west Europe in medieval times.
Well, roof is good i think - there was not used "yellow grass" texture. So it's made more realistic. Real ones had roofs those couldn't catch fire because of boiling oil that was used by stronghold defenders.

Well, i give 10\10 because it's real, it has rood, it has normal wheels, its like that one you could see in medieval times. I saw other models in wc3sear.ch like year ago but they were toy-like, fantasy-like, not real-like etc. This is the best.

Killface said:
The battering ram itself looks small compared to the rest of the shed containing it. I suggest you make it bigger.
Click to expand...

I agree with Killface. The actual log of wood is wider. Otherwise this is one good. Could I make certain modifications to it for my upcoming custom campaign? I want to show certain graphical updates as the battering ram is upgraded.

Models 32 Icons 3 Packs 1 Maps 5 Tutorials 1
Alex-Knight Mapmaker:
Well, the only ones I already saw are naga ram by jigrael and by rondo (on this website http://www.rondo.eu.tp/, no one of them were enough medieval and wc3ish appearance.

NatDis:
What kind of updates?

Maps 11
Thanks, this will prove very useful to a whole bunch of people, myself included.

Maps 1
So so so useful, I remember in one map I made, I used the crate destructibles as a ram unit rofl, I guess I intended for people to imagine their were wheels and people pushing it... Anyways, thanks to you those days are gone! 5/5 <3 It looks just like the AOE2 too

Maps 17
reminds me of age of mythology and age of empires... nice man 4/5 (recommended)

+Rep people who help you or who are pure win!

Maps 5
Awesome, i saw this in Medieval builders.

Age of Empires had some nice units, and this was one of them, a really good model indeed.

Ohboy yes, I only have 1GB!

offtopic:
1)you shouldn't necropost
2)you should post smth ontopic

Models 35 Icons 3 Packs 1 Skins 1 Tutorials 1
I thought I'd rated this before, but I guess I hadn't.

Anyway, I really like it. It looks great, is definitely useful, and has a great file size for a unit model. The wrap on the edges of the top piece are stretched, but that isn't really noticeable when it's at the appropriate size in-game.

Models 32 Icons 3 Packs 1 Maps 5 Tutorials 1
Lol you want to rate all 10k models in model section? This model was meant to be very simple as before that there were no rams available.

Mechanical Man said:
Lol you want to rate all 10k models in model section? This model was meant to be very simple as before that there were no rams available.
Click to expand...

Yeah, I know. I used this a long time ago and loved it, reminded me of Age of Empires II. I just figured it deserved a rating since I managed to remember it after all these years.

Maps 4
4/5.
Has it been replaced by those bulldozers-crane-like machines that use a big sort of chain or cable to swirl a heavy ball around destroying buildings?

Tutorials 2
Sorry for being super-OT here, but I honestly can not resist :


In the 1985 medieval film Flesh and Blood, the hero builds a siege tower with the size and mobility of a battering ram, in order to attempt to storm a castle. In the movie, this mechanical device is based on one of Leonardo da Vinci's drawings (this one iirc).

The story is set in Italy in 1501. It was considered a transition period to more modern times. Therefore, the movie depicts in its own way the introduction of "modern" siege warfare into battles (including the use of gunpowder to blow up wooden doors, instead of breaking them).

Careful, this movie is for mature audiences.


deepstrasz said:
4/5.
Has it been replaced by those bulldozers-crane-like machines that use a big sort of chain or cable to swirl a heavy ball around destroying buildings?
Click to expand...


Now, are some Orcs total retards or what ?

Models 32 Icons 3 Packs 1 Maps 5 Tutorials 1
rofl, only now I noticed that this wanker Battering ram claiming to be author, but I can assure he was of no helm in production of this model!

Icons 1 Maps 2
This is the best ram model on the site, good job!
You must log in or register to reply here.

Doubt anyone can make a Battering Ram, but i'm requesting

Would someone create a battering ram??plz

Battering Ram From The Skies