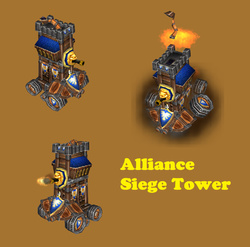 Well, just took me a year

The aliance siege tower based on the battle for Azeroth cinematic and ingame model. It ended a tad different tho due not so much to engine limitations but a mix of personal taste and trying to fit into wc3 more. Uses ingame textures.

General Frank
The model need to disappear at the end of the death or decay animation. Please fix this issue and I can approve this model.
Read full review...
Reputation Statistics
Page 1 of 2
Show Ignored Content
Page 1 of 2