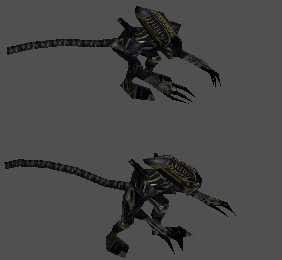 i love this model

there is nothing in the file :? it wont let me unzip either. can some1 help me with this?

Gr8 Job well done skin good animations good but the end of the tail needs some work other thatn that well done 4/5 :twisted:

I love this model. Ther are just one problem: In the movies (and the AvP games) the aliens are walking on there hind legs, not crawling like here. But else it's the best model ever made.

I have enjoyed this model for quite some time and just wanted to say it was great 5/5 from me, though nothing is perfect (especially with the wc3 engine!) this comes pretty darn close so thanxs.

@Greater_Evil I take it you've only experienced the alien "Genre" via the movies, but apparently not very closely all aliens seem to be capable of Crawling on all fours as well as just using their' hind legs also they seem to be able to "wall crawl" X-cept for queens and Praetorians.

@All-O'-the-folks-requestin'-QueenModel given the massive size of the queen and it's multiple appendages, as well as all of the miniscule details (frilled head-comb ,ect., ect.) the queen would be most moddler's nightmare so don't really be suprised if no-one even publicly attempts it.

Maps 3
Zillian somone has made a Queen model but it is'ent on this website. and that model is Per-fect 100\5 and it is very very useful too. but can you make one that stands on its hind legs?

If you want the queen model and good looking predator models and facehuggers, go into the map section and search for a map called Predators War Final 1.0 not 1.3, 1.0 is not protected. 5/5 by the way for the alien model.

Greater_Evil btw yes infact in Alien 3, the alien crawls on ALL 4 LEGS throughout the enitire film! And in practically all the movies you see the aliens crawl on all 4 legs, which with any animal makes it able to move a lot faster. So shush about the aliens no running on all 4s because you're wrong partner..

Maps 3
AlienAntFarm you are an perfect model maker! come on make a Alien Queen model i need it! 5/23567! Thanks!

Dude YOU ARE TALENTED !!!
If u make a Predator model contact me at my E-Mail [email protected] (if it exists sorry because i havent found it)
My Vote 10/10 Keep up the good work

Maps 1
9/10
make one predator plz,if have contact me: [email protected]

hey my computer has blocked me access to the files. any idea how to get into them? i need this model bad answer me plz :?:

But can u make a alien with a big green head and big black eyes?

But it's still a good model!

Maps 10 Spells 2 Tutorials 1
This Reminds me of the final boss on Conkers Bad Fur Day.

how do you make these work? some plz help me

Maps 10 Spells 2 Tutorials 1
Read what it says under skins. (ITS IN RED)

Maps 10 Spells 2 Tutorials 1
Umm This model does work I just imported it.
Set Blps to
Alien.blp and
Drone_head.blp

What about white.blp? Portrait malfunctions without it

Maps 1
Ok the model works but when i select it the game crashes and burns did i import something wrong? or is something fucked up?

A queen was made from this model a long time ago, but the vestigial arms were placed in the sides of the head. Other than that, it was just about the exact same.

If anybody plans on doing any Alien models, lemme know-- I have some high-quality textures that would come in handy. In essence, all that needs to be done is the modeling and slight texture adjustments.

Tools 1
GREAT ALIEN MODEL!!!
But i dont know how to import portrait.... I cant find that option in my World Editor...
Can any1 help me?

Model works great, it looks kick ass in the game, but portrait not working for me, it's just blank space

Maps 1
I'm not sure why, but I can't get the portrait to display; everything else works fine for me though. If anyone could help me, please do so.

this is a beautiful model

Icons 1
u should add an icon

Icons 1
very impressive, must say though didnt the aliens have a triangle spike on the end of their tails?

gave me a idea for a AVP deathmatch map

There is now a predator model. its ok but i like this better. 5/5

I'm a fan of alien series and I must say:
this model is really good, but the graphics would be better (you forgot the "knife" on the tail).
But i'll give you a 4/5

thx been looking for this!!!

Models 1
H. R. Giger would be so proud.
You must log in or register to reply here.