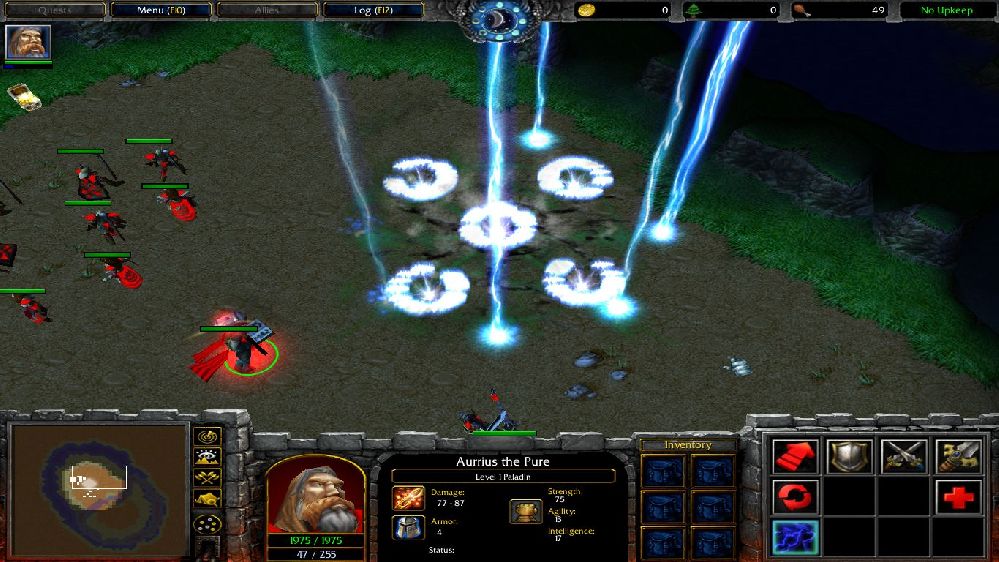 This bundle is marked as useful / simple. Simplicity is bliss, low effort and/or may contain minor bugs.
View usage Statistics
Reactions: nhocklanhox6
This is a spell i am trying to make for my map. So far, i like the way it looks. It has alot of cool lightning effects in a spiral with an epic circular explosion at the end deal stat based damage (the most important part).
But i know it has may have tons of leaks and might not be MUI or even MPI. I was wondering if anyone could help me make it at least MPI for the ORPG I am making...I am really confused on that concept.

UPDATE: v1.05
-Changed the look and effect of the spell
-Tried to remove as many of the leaks as i could
-When i tried removing lightning leaks the effects no longer showed...need help
-Added a mini-game as a bonus for testing my ability:

Can you kill the Mountain King? (Trust me it IS possible. I did it repeatedly) Good Luck

Originality: 4.6/5. Original but still not unique since the lightning is used in kind of the standard way. It strikes the earth. Then the earth electrifies. Nothing too extraordinary.

Execution: 1.7/5. I'd prefer to be silent about it but ok.
Effects: 3/5. Something ordinary here, effect spam looking, just in a range. But still, good eyecandy!

Spells 1
Oh thankyou for the link to the tutorial map for indexing. At first i was removing the special effect immediately after it was created but i had to take it out as it was not showing anything when i had it in...any way to fix that? i think the lightning animation is delayed by a fraction of a second and in the fraction of a second delay the trigger removes the effect before it can even be shown. That was my diagnosis to the problem lol but I am brand new to map making and triggers so everything in that spell was self taught...

Also I was trying to add another effect to the spell but it wasn't working so i just posted this one. I am changing it into a faster spiral that reaches the center every second and creates an explosion. Then the spiral starts again and it does this a number of times. Every time it reaches the center it will stun all opponents within the area (using a dummy ability, no problem there). I don't know if that would be more or less original but it is my intention. I'm working my way up to it as i learn more about triggers

Also, i just saw a tutorial for editing lightning so i think you will like the new effects i am adding (there will be 2-3 different colors of lightning making the spiral) so ill change that for the effects part.

As for all the other minor stuff you said...well...forgive me for being lazy didn't look too much into the stuff like the area the spell shows and such.

As browser said and your leaks results: 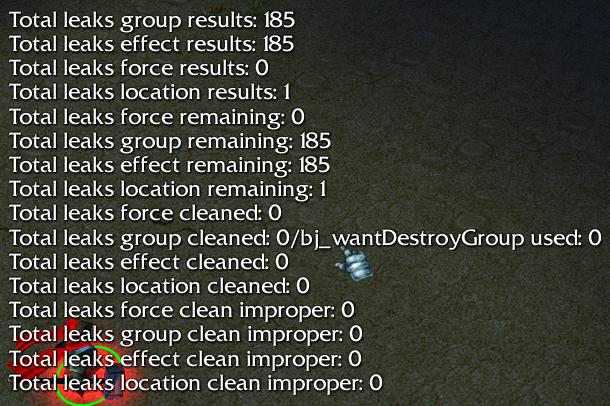 I think you need this too: Think that leaks

Spells 1
UPDATE
-Added the triggers (finally figured it out lol)
-Changed the entire look of the spell (its way cooler in my opinion as now i has two different types of spirals)
-Still can't figure out how to delete the lightning effects becuase when i do you can't see them. it deletes them too quickly :/

Notice: I'll help you but not now (Using mobile )

Spells 1
Yes I know it leaks i just can't seem to make the special effects for the lightning to show when i remove them right after creating them :/

Models 7 Maps 1 Spells 23 Tutorials 1
I believe Monsoon is a effect, is not lning, you can destroy it like destroy a normal effect, don't worry about when you destroy an effect, it instantly disapear, it have life span inside. it just automaticaly remove that effect when done, you should put "Destroy effect - Destroy a last created effect" below this line: Create special...

Spells 1
Please i think it would be easier for you to try it. put a "delete special effect" right after it is made in the first and second loops. There will be no lightning effects shown. it is perplexing me

EDIT: I notice now that it is because i am using the doodad version. i am doing this because the monsoon version makes the spell look very very sloppy -.- try switching all the lightning bolts out for the monsoon/target and you will see what i mean

So i don't really wanna use that. I would rather use the doodad as it has a shorter life and doesn't look messy when spammed every .05 seconds lol

Models 7 Maps 1 Spells 23 Tutorials 1
I'm online PC now, i saw what you doing, use hashtable to save effect and when the spell end, destroy it though hashtable ....
You can learn it from: http://www.hiveworkshop.com/forums/trigger-gui-editor-tutorials-279/hashtables-mui-133407/

Spells 1
I'm sorry I am trying to learn the hashtables but i don't think i am quite clear on the conept.

For every section of the "loop" triggers i am saving the special effects of the lightning bolts as "x of (key (last created special effect)) in M_Hashtable" so to try and explain this to you...

When integer is less than 25: create the lightning and save it as 0 of key(last created special effect) in M_Hashtable

When timer is between 25 and 50: create the lightning and save it as 1 of key(last created special effect)

This was my attempt to use a hashtable to save the effect and then delete it at the end. NOTE: I know i didn't clear all child handles at the end
You must log in or register to reply here.

R
how to stop casting when using monsoon ablity