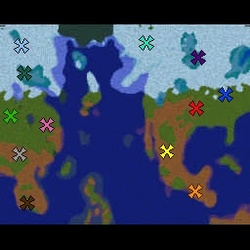 This map is based around 2026. The United States invaded Iran, Russia shipped weapons to Iran, Russia declared war on the US, China Joins with Russia because they have an oppurtunity to steal US technology, and war breaks out. Russia and Iran were horribly defeated, while China built a force big enough to take on the entire United States. Now battle is locked between these two Super powers!
--------------------
This map IS NOT to be copied or edited without MY PERMISSION.

Moderator
DesKaladA: Umm ok this map is incredbly consuseing to play and its no fun wat so ever really work on improveing every aspect of it but stince it wokrs appreved
Read full review...
Reputation Statistics
Page 1 of 2
Show Ignored Content
Page 1 of 2