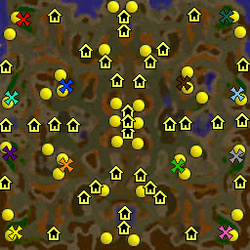 Information:
-The last update, focus on balance and try to find other different gameplay from the map and merc camp, and teamwork.
-Above orange camp I add low lv. flying unit to compensate the difficulty of the camp and to prevent from one units army or Blademaster farming all weak units. otherwise you need your teamate who play anti-air to help you clear it up.
-Long early game with low lv. green and yellow camp. and the late game red camp with powerful item drop, also the map is pretty big...
-The middle vertical road are full of good itemdrop 6 chance to get 'Ankh of reincarnation' from middle orange camp and permanent 6 from red goldmines. above that is artifact lv.8 at fountain red camp. who ever raid mid the most will take over the game when time pass. And not to make it too much unbalance there are artifact lv.7 at the GobMerch camp outside.
-This map add 3 other merc camp type in case of you wanna play with different strategy.
-Late game in the middle road will be a madness cause the most gold live along the middle road.

Deserted
0. Some starting positions are at invalid locations. 1. No way there is enough lumber for hour-long game. And some players have more than the others. 2. Guarded taverns are not a good idea, because it blocks hiring the firs hero at a tavern. 3....
Read full review...